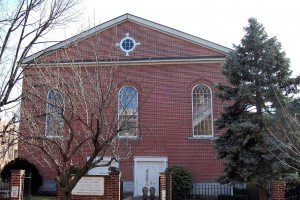 Old First Reformed Church, built in 1837. The 1786 Grand Concert was held in the previous church building on the site.

The recently-concluded Made in America festival is just the latest in a long line of musical extravaganzas the city has hosted over the years, most notably Live 8 in 2005 and Live Aid in 1985. This is a tradition that goes back at least to the “Grand Concert of Sacred Music” held May 4, 1786 at Old First Reformed Church in Old City. Though modest by today’s standards, this concert featured some 280 performers and was attended by almost 1,000 people. It was the largest musical gathering in America up to that time and a milestone event in Philadelphia music history.

The concert was spearheaded by Andrew Adgate, a late 18th century Philadelphia singing school teacher, choral director, and tune book author. Born in Connecticut in 1762, Adgate settled in Philadelphia in 1783 and became active in the city’s musical life. He made it his particular mission to improve the quality of sacred singing, known as psalmody, in Philadelphia. In 1784 he founded an Institution for the Encouragement of Church Music, later known as the Uranian Academy or Uranian Society. In addition to offering musical training to young people, the organization presented a number of public concerts, featuring mostly choral music. The biggest of these was the 1786 Grand Concert of Sacred Music. 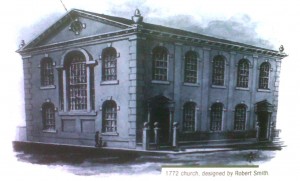 German Reformed Church, built in 1772. It was in this building that the Grand Concert of Sacred Music was held in 1786, the largest musical event in America up to that time.

Due to its size, the concert was not held in one of the city’s usual concert venues, but in the German Reformed Church, now known as Old First Reformed, on the southeast corner of Fourth and Race Streets. Built in 1772 and designed by Robert Smith, the most prominent builder-architect in colonial America, it was one of the largest buildings in Philadelphia, with a capacity of 3,000. It was the congregation’s second building on the site, replacing a much smaller 1747 hexagonal structure. The 1772 building was in turn replaced in 1837 by current building, the third on the site. The 1837 building had the same dimensions as the 1772 building, but was rotated 180 degrees and set back further from Race Street in an effort to avoid the street noise. 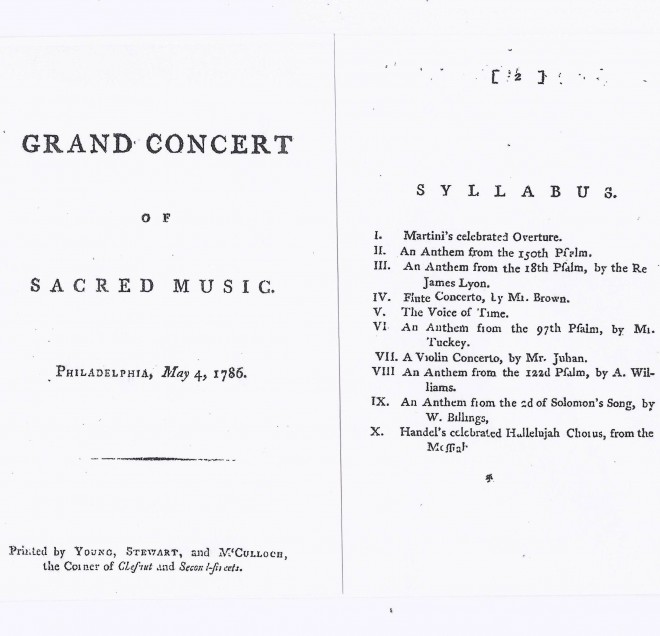 The program booklet, or “Syllabus,” from the 1786 Grand Concert shows that seven vocal pieces and three instrumentals were performed. What is especially noteworthy is that in addition to well-known European compositions, such as the Hallelujah Chorus from Handel’s Messiah, there were several pieces by American composers on the program. One of these was an anthem by James Lyon, who had published a very influential tune book in Philadelphia in 1761 entitled “Urania.” It was probably from this publication that Andrew Adgate’s Uranian Academy took its name.

Another unusual aspect of the 1786 Grand Concert was that it was reviewed in the local newspaper, a rare occurrence in the 18th century. In a lengthy article, the May 30, 1786 Pennsylvania Packet described the concert in detail, noting that the ensemble “was the most complete, both in respect to number and accuracy of execution, ever, on any occasion, combined in this city, and perhaps, throughout America.” The article also stated that the “decorum and method observed in conducting the whole harmonized with the precision and order necessary to the perfection of a musical performance.”

Andrew Adgate would go on to present several other high-profile concerts Philadelphia before dying in the city’s yellow fever epidemic in 1793 at the age of 31. While Philadelphia would continue to be a thriving musical center in the years following his death, it would be quite a long time before the city would see choral concerts on the scale of those presented by Adgate.