On Fabric Row, Signs Of A Paradigm Shift 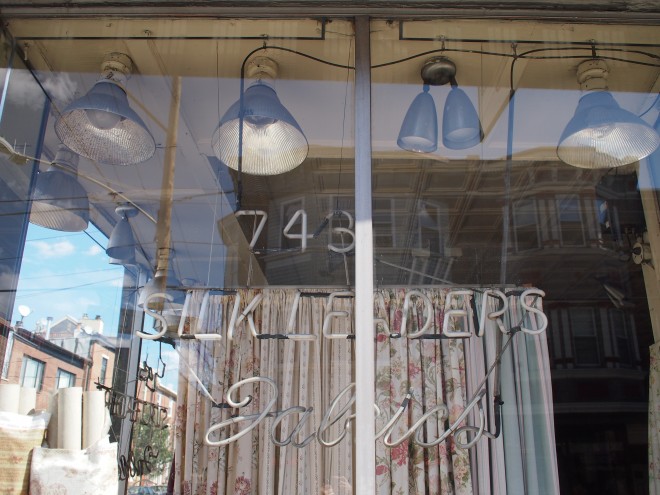 “Fabric Row” on South Fourth Street below South Street still has fabric dealers tracing back to the turn-of-the-20th-century, when it was the center of the commercial life of Philadelphia largest Eastern European Jewish immigrant neighborhood. The street swarmed with peddlers, fishmongers, produce men, egg wholesalers and the like, and shoppers representing the neighborhood’s rich polyglot.

In the 1940s Fourth Street became a wholesale fabric center, a status that it’s held on to amidst several upheavals–including an Urban Renewal-inspired attempt to move the industry to Fourth and Spring Garden in the 1960s–since then. Today, some 25 textile related shops survive amidst 95 retail spaces from Bainbridge to Christian, 14 that are vacant. 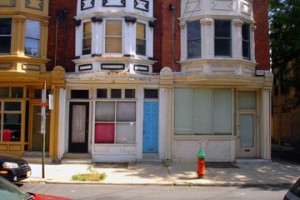 The high number of vacancies is consistent with the poor health of South Street’s retail trade, but with rents lower on Fourth, some new merchants see an opportunity to evolve the street into a branded design district.

“The addition of galleries, design studios, boutiques, pet shops, vintage shops and bicycle shops has only enhanced the street,” says Elena Brennan, owner of Bus Stop shoe boutique and marketing chair of the South Street Headhouse District. “It will continue to do so as more businesses open up. Fourth Street is a gem of a find for anyone who stumbles across it!”

Of course, Brennan doesn’t want it hidden for long. Following the example of other such districts in other cities–from Barcelona to Seattle–a Fourth Street/Fabric Row design district would become a destination all its own. This is a key advantage: Fourth Street already attracts professional designers and DIYers who use it a central marketplace for textiles and supplies.

But taking an existing place fraught with its own history and considerable number of moving parts and turning it into an important source of services, employment, food, commerce, education, and inspiration–a mini-city with an emphasis on the arts and design–will be a challenge. (The folks at the South Street Headhouse District can attest to the difficulty of creating a a branded identity.) Given the many moving parts–from the dozens of building and shop owners to residents to the real estate market–strong local leadership will have to emerge. 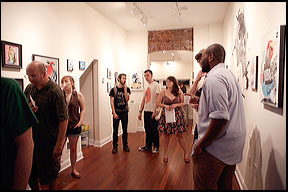 Enter Jason Chen and his partner Sara McCorriston, both recent University of the Arts graduates who are the owners of Paradigm Gallery + Studio, a small, white-walled, track-lit space lined with art in a variety of media (Chen is a photographer, animator, and filmmaker and McCorriston is a fiber and installation artist and a costume designer). The pair have ambition to create a community arts space with shared studios, connect with other merchants, and expand their own space and the idea of what Fourth Street can be: a design district the city hasn’t ever successfully created.

“We’ve spoken to many neighbors about it,” says McCorriston, and it sounds like many people are actually pushing for it in various ways. We all need to join together to make it happen though–there is so much passion. And really no reason not to: the spaces exist, the customers exist, and the first half of the businesses needed to make it happen already exist, but we need to make it worth it for businesses to want to be in this neighborhood.”

“Fourth Street is definitely evolving,” says Brennan, a Londoner who opened Bus Stop in 2007. “I have seen the street change a lot since I opened over 5 years ago.”

Gary P. Steuer, who runs the City’s Office of Arts, Culture and the Creative Economy, told me that Philadelphia doesn’t yet have a structure for creating official design districts. But rather than discouraging such activity he suggests that the opportunities are wide open. 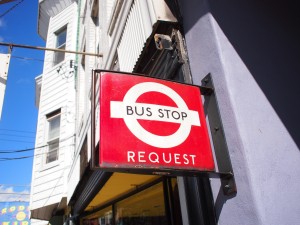 McCorriston agrees. “I rarely depend too much on things like this evolving organically, there has to be some community action/push for it, especially considering the great number of inactive businesses and vacant storefronts that have extreme potential. It’s absolutely happening on its own, but at this rate, some of the businesses depending upon the district evolving to a more sought out destination may not last the test of time waiting. Many of the available storefronts seem to be requesting a much higher rent than the current condition of the space is worth.”

Still, says Brennan, who has recently expanded her business into a new space, “grants are available for store front improvements, the rents here are very affordable, compared to other neighborhoods such as Old City, Rittenhouse, etc., and the neighbors would embrace a design district.”

Plus, there is the legacy. “That’s one of the reasons that Fourth Street was so enticing to me,” she says. “I love the old with the new, the history of the fabric shops, some of them are over a 100 years old, and the new blood on the street. I see the street to be very diversified. If you walk up and down the street that is so evident. Also, a lot of the establishments support the arts and local artists by hosting 4th Friday events to showcase local art.”

Says McCorriston, “we have the people that own and operate their businesses smiling to say hello as you walk down the street, just happy to have you as a neighbor. I’d love to see that embodied in the name of the district somehow, which I think would also attract the businesses we need.”