Lydia Or Neo-Caesarea Or Alasehir? Just Call It Philadelphia 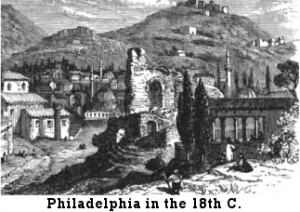 Every good Philadelphian knows that the word “Philadelphia” comes from the Greek words meaning “Brotherly Love.” (More accurately: Philadelphos means “one who loves his brother.”) What was William Penn thinking of when he named the city? Moreover, was this the first City of Brotherly Love?

Let’s first take a look at the “Prayer For Philadelphia” that William Penn penned in 1684, before he departed the fledgling city for the first of two times:

And thou, Philadelphia, the virgin settlement of this Province, named before thou were born, What love, What care, What service and What travail has there been to bring thee forth and preserve thee from such as would abuse and defile thee! Oh, that thou mayest be kept from the evil that would overwhelm thee; that, faithful to the God of thy Mercies, in the life of righteousness, thou may’st be preserved to the end. My soul prays to God for thee, that thou mayest stand in the day of trial, that thy children may be blessed of the Lord and thy people saved by His power. 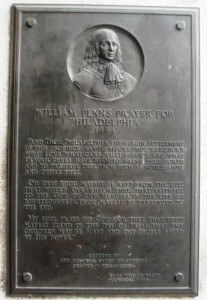 William Penn’s “Prayer For Philadelphia,” a plaque at City Hall.

Penn’s choice of name for “the virgin settlement” of his new land described what he wanted his city to be: a “City of Brotherly Love.” He could have retained the Delaware Indian name for the area: Coaquannock, meaning “Grove of Tall Pines.” Or, he might have used the name of the place where the alleged Treaty Elm stood: Shackamaxon. But Penn may have realized that the treaty area’s Indian name was open to wide interpretation, based on different dialects of Unami, the Lenni-Lenape language. (Besides “Meeting Place of the Chiefs,” Shackamaxon could also mean “Place of the Eels.”) Furthermore, Penn’s notion was that his new city was different, not like anyplace else in the world.

This may be so, but there were other Philadelphias—long before there was a Boston or New York. In fact, the ancient Greeks gave the name to several cities. William Penn knew this, which may account for the “named before thou were born” bit above.

Location of the ancient city of Philadelphia.

The best example of an ancient City of Brotherly Love was a town in Lydia, a kingdom of western Asia Minor. This settlement was located east of ancient Ionia in modern Turkey, near mount Tmolus, by the Cogamus River. King Attalus II (nicknamed “Philadelphus of Pergamosa” and “Attalus Philadelphus”) founded ancient Philadelphia in 140 B.C. during his reign (159-138 B.C.). Situated about 75 miles east of the Aegean Sea coast, the town was thus on one of the greatest trade routes in the world, linking Europe to Asia. The strongly fortified place held the key to the door through which all east-west trade and commerce passed. 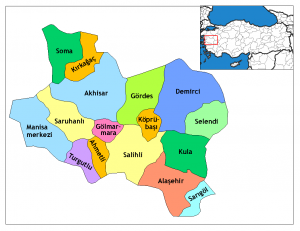 Portions of the ancient city of Philadelphia.

King Attalus designed Philadelphia for commerce and to be a missionary city through which Greek language and civilization would be spread to Asia Minor and beyond. As such, the city was a center of Greek culture and refinement. The old city sometimes bore the title “Little Athens” because of the magnificence of its temples and other public buildings. (This is much like our city once being called the “Athens of America” or the “Athens of the Western World.”) And rich in mineral hot springs, Philadelphia was a health spa for tourists who came for its medicinal waters.

The city was also famous for its grapes and wine; its chief deity was Dionysus, the god of wine in Greek mythology. Dionysus was also the Roman god Bacchus, so Philadelphia’s coins later bore the head of Bacchus and the figure of a Bacchante. As with the history of our own City of Brotherly Love, its products were shipped throughout the (known) world.

But unlike our city, ancient Philadelphia was subject to volcanic eruptions and earthquakes. The tiny earthquake that shook our fair city in August of 2011 was nothing like the one that destroyed ancient Philadelphia in 17 AD, as described in the Book of Revelation, 3:7-13. (Recurrent quakes occurred for twenty years.) By then, Philadelphia had become part of the Roman Empire. The city was rebuilt by Roman Emperor Tiberius and became a center of early Christianity. In gratitude, Philadelphians renamed the town Neo-Caesarea (“new city of Caesar”), but later reverted to the original name. But the cost of repairing the often shaken city taxed heavily the citizens, and poverty prevailed. 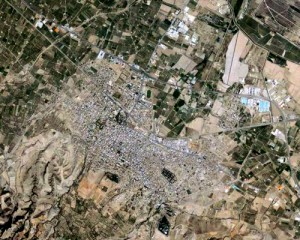 The modern town of Alasehir, Turkey.

The Christian church in Philadelphia was the sixth of the Seven Churches in Asia Minor written about in the Book of Revelation. (These were: Ephesus, Smyrna, Pergamum, Thyatira, Sardis, Laodicea and Philadelphia.) Revelation 3:7 states:

Since it was a missionary church that spread the gospel, it was one of two church of the seven that was viewed favorably. It also had the longest duration of prosperity as a Christian city of all the seven churches. 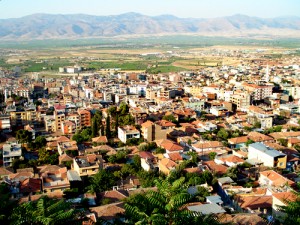 A Roman town until 1379 A.D., it fell into the hands of the Turks after persistent resistance. The Turkish city of Alasehir (or Ala-Shehir, the “city of God”) stands on the site of the old Old City of Philadelphia. Some eighteen thousand people call the place home. All that can be seen there relating to its Christian history are a section of Byzantine wall and a couple of brick pillars of the Church of St. John dating to the eleventh century.