In A 1930s Supermarket, Reinventing The Food Industry 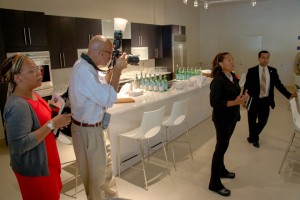 Editor’s Note: Last week, the 13,000 square foot Dorrance H. Hamilton Center for Culinary Enterprises, designed by Friday Architects, opened in West Philadelphia in a vintage Acme Markets store from the late 1930s (for our photo essay on the new building click HERE). The food incubator, which is an off-shoot of The Enterprise Center, one Philadelphia’s longest-surviving business incubators, is directed by chef and former restaurant owner Delilah Winder. The center provides culinary industry entrepreneurs–caterers, private chefs, cafe and restaurant suppliers–with a full range of supporting equipment and business coaching services, as well as a demonstration kitchen. The LEED certified building was funded by a diverse range of grants and gifts, including funding from the US Department of Commerce, the philanthropist Dorrance Hamilton, and the former publisher of the Philadelphia City Paper, Bruce Schimmel. We caught up with Gregory Heller, director of The Enterprise Center Community Development Corporation, for some insight into the project.

Hidden City:
Food seems to be more and more driving the grassroots urban economy–is there a facility and program like this one in other cities? Is there a model?
Gregory Heller: Yes, there are at least 43 other kitchen incubators across the U.S. Ours is one of the larger ones and we also believe that ours is the most comprehensive in terms of providing access to business technical assistance, capital and contract opportunities in addition to the physical facility. I’ve visited a few of these in New York and Boston.

HC: The building was a supermarket, served the neighborhood in a much different capacity, but was it important to you that you’re evolving what was built to be a food-related building?
GH: Not necessarily, but food is an important anchor for retail corridors, and I think having new restaurants on the corridor will play a major role in attracting visitors. There will be three new restaurants along 48th Street. These are traditional leases to businesses not connected with the kitchen incubator. [Two signed on already are Lahori Cuisine, being billed as the “first true Pakistani restaurant in West Philadelphia,” and the Ethiopian-flavored Cafe Injera.]

HC: How does this facility fit into the West Philly food ecosystem? Are there relationships with growers and suppliers?
GH: The relationship with growers is something I’ve wanted to develop down the line. We have definitely been connecting with suppliers and also sales venues for clients. 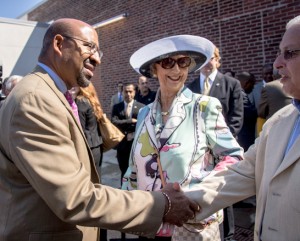 HC: You are well-regarded as an expert on Ed Bacon and were his confidant late in life. Bacon was a master salesman–is this somehow reflected in your understanding of what it takes to sell a project to funders and the market place?
GH: My forthcoming biography of Ed Bacon (to be published this winter by University of Pennsylvania Press) focuses on Bacon as a policy entrepreneur who was skilled at marketing ideas and visions to others as a way of connecting plans with the process of implementation. I learned a lot from Bacon about how important that skill is in turning ideas into reality, and what strategies are effective. Trying to get a project as complex as this one built during a recession very much required us to sell the vision in order to get others invested.

HC: The project has evolved from its initial concept.
GH: Initially it did not include the eKitchen Multimedia Center–our teaching kitchen/TV studio. This component was added along the way and is a critical piece to making this project more than just a back-of-house operation for entrepreneurs. The eKitchen will be a venue where we can host events, air public programming, and hold community workshops. It is the public space in the project and I’m glad that the overall concept evolved to include it.

HC: And how might it evolve?
GH: The biggest evolution will be in how the kitchens are used. Over time we may acquire additional equipment, shift the space around, and generally customize it to best suit our actual membership.