Goldtex Protests At An End? 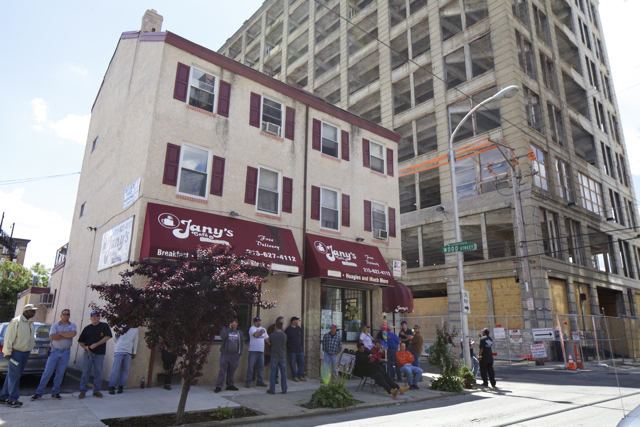 Union pickets next to the Goldtex Building in June | Photo: Hidden City Daily

Rumors have been flying that the highly publicized union protest at 12th and Wood Streets may have finally come to an end.

Michael Pestronk, of Post Brothers Apartments, which owns the former Goldtex Building under construction, acknowledged today that they had indeed met with union leadership yesterday, as they have regularly since the start of the protests, and that most rank-and-file members had been pulled from the picket line.

However, Pestronk stopped short of saying that a compromise had been reached.

“They approached us and said that if we made our next development, at Broad and Spruce, 100 percent union that they would back off us at Goldtex,” said Pestronk. He claims that Post Brothers countered by saying that they could not guarantee that the next development would be 100 percent union, as it has not yet gone to bid. However, they indicated that they would be open to hiring union workers and even “paying a premium for their services,” both at their future site and at Goldtex, if their rates were competitive.

Pestronk said this is consistent with the line Post Brothers have taken throughout the protests. He said the only agreement they came to at the meeting was “to continue talking.” He added that there were no binding agreements or any contracts signed at that meeting.

“But, after that meeting yesterday, for whatever reason, they pulled some picketers off the site,” said Pestronk.

“Nothing happened and nothing changed, but I think they needed something to tell their guys, to say ‘Hey, we’re making progress, something’s happening here.’ To us there was no outcome except that we will continue to talk and continue to work, which is what we were going to do anyway,” he said.

Pestronk says that he thinks the sea change at 12th and Wood came from union officials backing off of prior demands that the Goldtex site become union only. He said officials indicated that they would be amenable to running that project as a mixed shop. Post Brothers said they would be happy to pay union workers a competitive rate, and that they have no plans to lay off their current non-union construction crews.

Pestronk insisted that this offer was also nothing new, recalling that the initial dispute stemmed from Post Brothers attempts to run Goldtex as a mixed-shop. “I don’t know what they’ve been telling their workers, but I think they’d always kind of been lying to them and saying that our position had been that only non-union workers could work at Goldtex,” something he said was not the case.

“We’ve been offering them that to them for a year now, so we continue to be happy to let them work there,” said Pestronk.