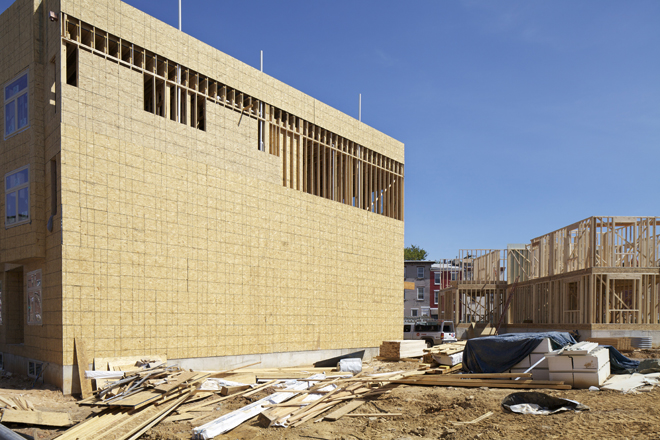 The pretty standard contemporary townhouses being constructed on the triangular 800 block of North 19th Street between Vineyard and Wylie Streets in Francisville don’t hint at the rich industrial history of the street (indeed, the triangle shape is a result of the neighborhood’s rather peculiar pre-industrial history). This was the factory home of the king of the pocket watch Theophilus J. Zurbrugg, a gilded-age industrialist who monopolized the industry, turning the Philadelphia Watch Case Company into a multi-state conglomerate. 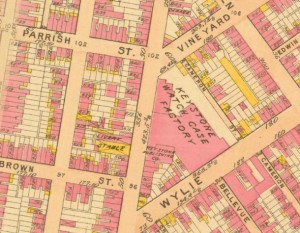 The Philadelphia Watch Case Company made metal watch cases for a variety of pocket watch makers in the Victorian era, when most men carried a pocket watch. Until the 1920s, watches and watch cases were manufactured separately. 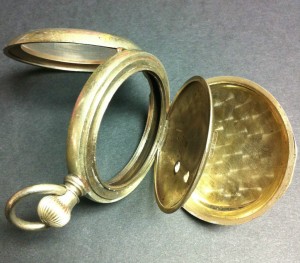 A watch case made by the Philadelphia Watch Case Company.

In 1884, a 23 year old Zurbrugg, who was born in Switzerland, founded the Philadelphia Watch Case Company on the east side of the 800 block of 19th Street. Zurbrugg bought out the existing watch case company of Leichty & Le Bouba, as well Hagstoz & Thorpe, another watch case firm that had erected a small factory on that block of 19th Street in 1880. Zurbrugg’s company soon employed hundreds of men, women, and children who produced 4,000 watch cases every day—about 1,250,000 a year. A crown was one trademark, an arm and hammer another. 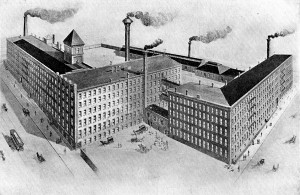 Philadelphia Watch Case Company factory on 19th Street. From Moses King, Philadelphia and Notable Philadelphians (1902). In that era, thick smoke emanating from factory smokestacks was seen as a sign of prosperity.

The Philadelphia Watch Case Company, which later became the Keystone Watch Case Company, expanded rapidly after it began to produce gold-filled cases. It was once the sole maker of the solid gold “Keystone,” “James Boss” filled, “Keystone Sterling Silver,” and “Cyclone” rolled plate and silverroid watch cases. In making these watch cases, the firm used a process of bonding thin sheets of pure gold to a stronger base metal. These products were sold not only domestically, but also overseas to Swiss watchmakers.

The 19th Street structure was almost doubled in size in 1887, and the company also occupied a four story adjacent building. 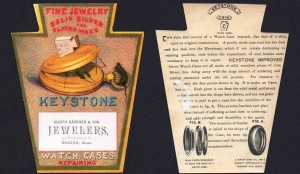 The Keystone Watch Case Company distributed die-cut printed trade cards to jewelers and watchmakers to advertise their product. Humorous and colorful images were used. These cards were often imprinted with the name and address of the local retailer.

In 1902 (some accounts say 1892), Zurbrugg moved the company to Riverside, New Jersey, off the Rancocas Creek and just across from Philadelphia’s Tacony district. (The Francisville plant was still apparently retained and operated into the 20th century.) Zurbrugg selected the old Pavilion Hotel—built in 1852 and vacant when he acquired it—for his new factory.

The next year, Zurbrugg acquired the New York Standard Watch Company. The following year, the Philadelphia, the Keystone, and a number of other watch case companies—most of which were already under Zurbrugg’s control—merged and continued under the Keystone name. The company then purchased the trade name of the famous Edward Howard Watch and Clock Company of Boston, Massachusetts. It begin making the “E. Howard Watch Co.” brand of watch in Massachusetts in 1905. Also, by that time, the Keystone Watch Case Company also owned several watch movement companies. 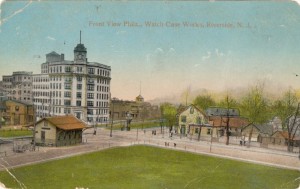 Zurbrugg had creaed an empire. In 1906, he began construction of a new building south of the old hotel. Completed in early 1908, the 7-story office building featured a prominent clock tower at the corner. The Riverside factory became quite a landmark attraction in South Jersey. It employed 1,000 people producing 6,000 watch cases per day, making it the largest watch case manufacturer in the world.

In the early 20th century, Keystone was continually being sued by other case companies and by the US government due to its violations of the Sherman Anti-Trust Act. Still, it survived longer than most companies making Victorian-era products.

When the popularity of pocket watches declined, so did the company’s business. Keystone became a division of the Riverside Metals Company in 1942. Manufacturing at the New Jersey factory ceased thirty years later, although the building is still standing. 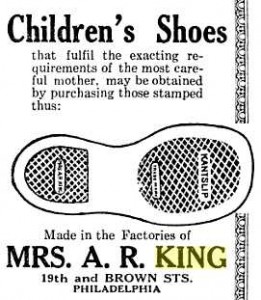 The North 19th Street site in Philadelphia became a shoe and boot factory by about 1915. Melville Woodbury, a prominent New England shoe manufacturer, moved the factory of his Kozy Slipper Company to the old watch case plant from Lynn, Massachusetts. The firm made traveling slippers, hospital slippers, and rope sole shoes.

Woodbury also moved his other shoe-making business, “Mrs. A. R. King, Inc.,” from Lynn to the same location. These moves were a result of Philadelphia’s non-taxation of machinery used in shoe manufacturing. The King corporation made all kinds of shoes on 19th Street and elsewhere, including “Mrs. King’s Celebrated First Step” shoes, “Mrs. King’s Barefoot Sandals” and “Mrs. King’s Ankle Ties.” The firm’s motto was “Our Trade Will Last as Long as Babies Are Born without Shoes.”

Apparently, babies were born wearing shoes in the 1950s and 60s, which was just before the factory closed. Along with a handful of houses, it was cleared from the site sometime after 1970. The triangular block was a barren field until the current townhouse construction.