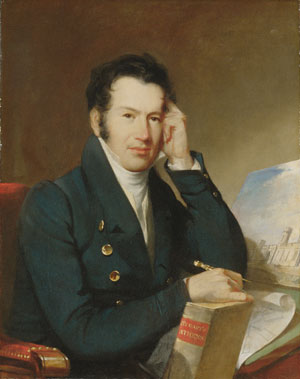 John Haviland (1792-1852) was among the most important 19th century architects of Philadelphia. Born in Somerset, England, he was bound to an architect in 1811 and later hoped to secure an appointment to the Russian Imperial Corps of Engineers. While in Russia, he met John Quincy Adams, who encouraged Haviland to come to the United States, which he did in 1816.

The architect is noted chiefly for his prisons–Eastern State Penitentiary (1829) in Philadelphia, chief among them. He was also the architect responsible for the design of the old Franklin Institute, erected in 1826 on Seventh Street south of Market, now the refurbished Philadelphia History Museum at the Atwater Kent. Haviland opened a drawing academy and subsequently taught drawing at the Institute. His other major works include the Pennsylvania Institute for the Deaf and Dumb (1824; now part of the University of the Arts), and renovations to the Walnut Street Theater (1827). 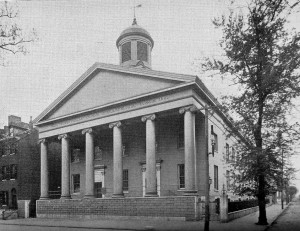 His first important commission, however, was the First Presbyterian Church on South Washington Square in 1820. (It should be remembered that in the 18th century and during much of the 19th century, Philadelphia was virtually the capital of American Presbyterianism. The city had three Presbyterian churches as far back as 1776.)

First Presbyterian was the first Philadelphia church to have a full classical Greek temple façade. Locomotive maker Matthias Baldwin became a member in 1831. It was there that the first meeting of the General Assembly of a reunited Presbyterian church was held in 1870. In 1895, the church had 560 members and 367 pupils in its Sabbath school.

The Presbyterian congregation remained on Washington Square until the late 1920s when the church moved to 15th and Locust Streets. (Today, First Presbyterian Church is at 21st and Walnut Streets.) The stately building was demolished in 1939 and replaced in the the 1960s with modern townhouses adjacent to the high rise Hopkinson House. (The land was used as a parking lot from 1939 to 1960.) 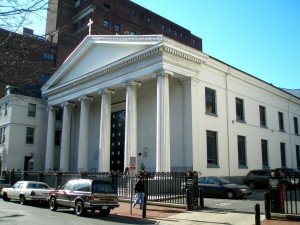 Haviland used as his model the Temple of Dionysus at Teos, an Ancient Greek city in Turkey. The Greek revival structure has a classical front complete with six fluted ionic columns and a flight of marble steps along the entire front. Its cast iron fence–with Medusa head decorations–is one of the most noteworthy in a city of such exceptional ironwork. The central front door is fourteen feet wide and twenty feet high, though only the lower half opens. The stained glass windows on the first floor are original and date from 1822; they have been called Philadelphia’s finest examples of early American stained glass. 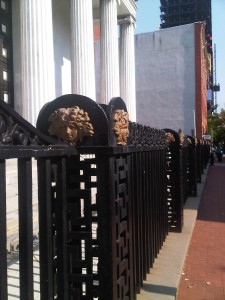 St Andrew’s was connected with missionary work since its very beginning. Church leaders held the first meeting the Protestant Episcopal Board of Missions in 1835 and notably, in 1822, they were the first Americans to send aid to the Hellas (Greek) War of Independence against the Ottoman empire. This was also the first church in the United States to establish an Infant Sunday School, and the first Protestant Episcopal Church to organize and carry on a Sunday School for African children.

Remarkably, this handsome edifice is still being used as a church. Just about one hundred years after its construction, the Episcopalians sold it a congregation of Greek Orthodox worshippers in 1921. The neighborhood was no longer much inhabited by Philadelphia’s Protestant elite and by the 20th century had become an enclave of immigrants from Greece and eastern Europe. 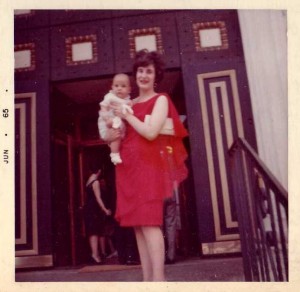 The author and his mother in front of St. George’s.

John Haviland died on March 28, 1852, in Philadelphia. He was, incidentally, buried in a crypt beneath this church. When St. Andrews was sold to the Greek congregation, his remains were later re-interred in the courtyard of the former Philadelphia Divinity School (the Episcopal Seminary) in West Philadelphia.