Zophar, Tran, And The Chocolate Factory 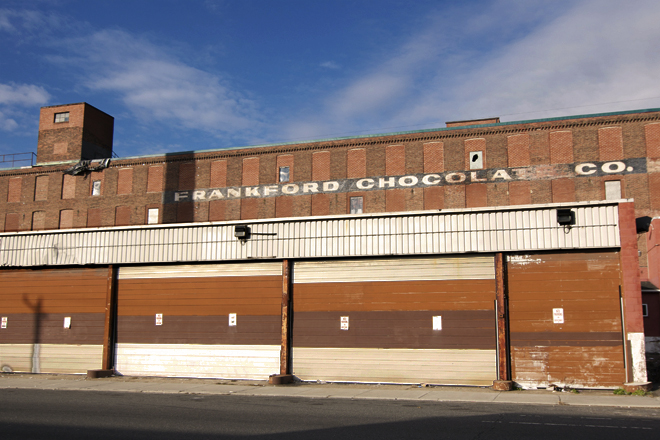 Empty and essentially unused for the last five years, the rebirth of this 152,000 square foot controversy magnet at 21st Street and Washington Avenue, the former Frankford Chocolate Company factory, once again seems in doubt.

In March, the Zoning Board of Adjustment approved a revised mixed residential-commercial plan for site designed by Campbell Thomas Architects. But the death of owner Tran Dinh Truong, the man whose visage graced the building since 2008, has put the project in doubt. The zoning approval is likely to be lost if the family doesn’t move on the project soon.

The ZBA-approved plan for the site | Image: Campbell Thomas Architects

Its future in doubt, the factory’s history, however, goes back to the 1860s, or the 1790s, depending on how you’re counting. Just don’t let anyone tell you this city wasn’t the wallpaper or the chocolate Easter bunny capital of the world.

We start in 1793, when the father-and-son team of John Howell and John B. Howell moved their Britain-based wallpaper company to Albany, New York. At the time, there were only two other wallpaper companies in the country. In a ramshackle building attached to their house, the Howells produced wallpaper using the most efficient technique of the time–gluing small sheets of paper together into a long roll that would be blockprinted and handpainted with patterns and designs.

Ambitious, the Howells realized that the wallpaper trade would be more successful in a larger city and so in 1803, they sold their small Albany factory and attempted a move to New York. Failing there, they tried Baltimore. In 1820, they hopped a steam packet and came north, making Philadelphia their permanent home.

John and John, Jr. opened up shop in the back of a building at 351 North 2nd Street, eventually moving to larger and larger spaces every other year. By 1840, John B. Howell’s five sons had taken over the company, renamed it Howell & Brothers, and built a large factory that filled the entire north side of the 1900 block of what is now Delancey Place. They claimed it to be the largest workshop of its kind in the world. Soon the block became “Howell Street,” a name that would stick until well after the factory was demolished. 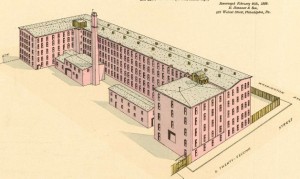 Southwest-facing view of the building from 1889 | Source: Athenaeum of Philadelphia

The Howell & Brothers company was the first to import a color wallpaper printing machine into America, in 1844. This machine, capable of printing in 54 colors, shot the already successful company into the stratosphere–enabling them to open more factories around the country by the end of the decade. Howell & Brothers became specialists in trompe-l’oeil printing–wallpaper printed to make rooms appear to have ornamental friezes, plasterwork, paneling, and even niches with statues. Eventually, the company grew so large that the largest wallpaper factory in the world was no longer spacious enough for the Howells.

In 1865, construction began on a brand new, high-tech factory in what they called the “Grey’s Ferry District,” on the north side of the 2100 block of Prime Street–later to be called Washington Avenue. There were two big advantages to this location: much more space and easy access to the Philadelphia, Wilmington, and Baltimore railroad.

The factory opened for business after one year of construction. At first, the operation was housed in the the long L-shaped 4-story building that still stands in the middle of the property along with a few outbuildings. Over the next few decades, the company would construct several additions, remaining the largest factory of its kind in the world.

Zophar Carpenter Howell, the most ambitious of the five brothers, came to control the company. This man became your classic Gilded Age tycoon. He would go on to diversify the family business, founding the Howell Real Estate Company, the Camden National Bank, and the Howell Corporation, an umbrella for all his other business interests (including the wallpaper factory). When he died at age 93 in 1902, the extremely wealthy Zophar was the oldest living Freemason in the world. 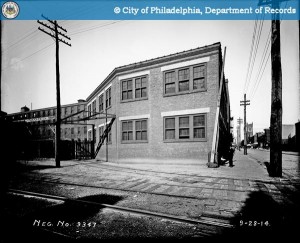 As a John Wanamaker Warehouse in 1914 | Source: PhillyHistory.org

The factory on Washington Avenue didn’t last much longer after that. It then became home to the American Can Company, which heavily altered and added-to the building in the short amount of time they occupied the space. Soon after it became a John Wanamaker warehouse, and it would remain so all the way into the 1970s, when the Frankford Candy and Chocolate Company took over the location, making it the home of the largest chocolate bunny-making operation in the world. The sign from the company still graces the factory’s 1866 facade. Frankford Candy and Chocolate operated there until 2006.

In February 2007, controversial developer Tran Dinh Truong’s Alphonse Hotel Corporation bought the property for $5.75 million with plans to completely overhaul the factory into a mixed-use superplex called the New Vietnamese Center. Tran installed giant banners on the facade of the building, which featured a large portrait of Tran himself. His plan was for up to 15 restaurants, 50 residences, storage space, and multiple retail locations.

Some parts of the complex were to be demolished, others to be enlarged. The proposal even included penthouses built on an extra floor constructed on top of the 1866-built section of the building. Neighborhood opposition was heavy, especially from residents that lived along the back of the property on Kimball Street. Though the project was not opposed by South of South Neighbors Association, the Zoning Board of Adjustments rejected the proposal in October 2009. 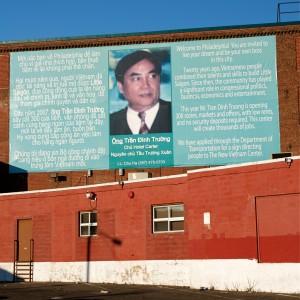 Over the next three years, the large posters faded and disintegrated. It appeared the project was dead; at best, it seemed, the old Howell & Brothers factory would become a glorified cell tower. But more recently, after working with neighbors and downsizing the project, on March 2, 2012, the Zoning Board of Adjustments approved a revised–and seemingly less-ambitious plan–for the factory, which include doctor’s office suites, restaurants, and 30 residential units, as well as interior parking for 80 cars. But then, on May 6, the 80 year old Tran died, putting the project again in peril.