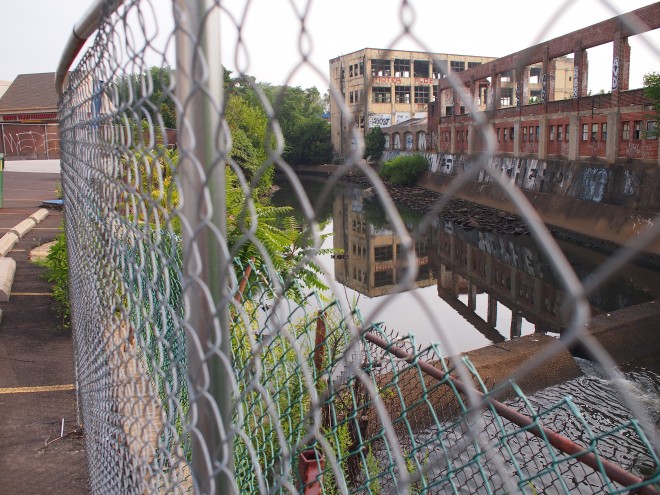 Largely flanked by disused or underused buildings, vacant land and parking lots, the Frankford Creek remains the last major open-air creek in the city without adjacent green space. The Lower Northeast District Plan draft, to be released on Monday, proposes replacing these with a greenway: part green storm water management infrastructure, part public park, and all trail, the Frankford Greenway will follow the creek from Wingohocking Street to the Delaware River. It will connect with Tacony Creek Trail, now under construction, in the end forming a 6.2 mile trail connection between Montgomery County and the Delaware River.

Conceived by various city agencies including the City Planning Commission, Parks and Recreation, the Redevelopment Authority, and the Water Department, the project will help fulfill the City’s pledge that 75 percent of Philadelphians will live within a ten minute walk of a park or recreation facility by 2025.

“There is a need for linear and local green space in this area of the city, as determined by Green 2015 and the upcoming Philadelphia Trail Master Plan,” write Rob Armstrong of the Planning, Preservation and Property Management Division of the Department of Parks and Recreation and Jeannette Brugger of the Strategic Planning and Policy Division of the Planning Commission, in an e-mail. “In addition, there is a need to connect several trail amenities in the area, such as the Tacony Creek Trail, the East Coast Greenway, the soon-to-be-constructed Port Richmond Trail on North Delaware Avenue, and on-road bicycle facilities, which will be satisfied by the Frankford Creek Greenway.”

The Delaware Valley Regional Planning Commission has given the city a grant for an initial feasibility study, to study engineering and potential for land acquisition. An request for proposals for firms to conduct the analysis will be issued by winter. The study is expected to take ten months; after that, the project timeline becomes indeterminate, depending on funding and land acquisition. 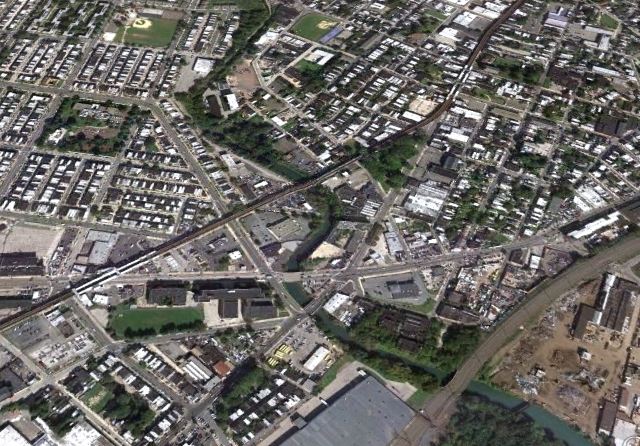 The feasibility stage of the project has the support of District Councilwoman María Quiñones-Sánchez. Ian Litwin, Lower Northeast District Plan project manager, says realization of the greenway remains a “moving target,” dependent on funding and land that have yet to be acquired. “All the land along the creek is privately owned so the city will have to acquire the land, which will not be cheap,” explains Litwin.

For precisely this reason, assembling the greenway will begin on the Juniata Park (south) side of the creek, where the parcels are relatively large. On the Frankford side, the creek is lined by rowhouse-sized lots. (It should be noted that though most of the land adjacent to the creek is vacant, according to city officials, no property owner will be forcibly relocated, and for those who choose to relocate the cost of their property and relocation would be compensated by the city.)

Litwin compares the current state of the Frankford Creek to the Los Angeles River: paved, underused, and lined with vacant land only urban explorers care to frequent. The main difference is that the LA River is a constant trickle, while the Frankford Creek oscillates with rainfall between trickling and overflowing, a bi-product of the combined sewer system. One of the largest outfalls in the sewer district is where the creek runs by the Juniata Golf Course. Hence the Water Department’s interest in the project: the riparian area surrounding the creek is ripe for soft storm water management infrastructure, such as rain gardens, depaving, and storm basins. 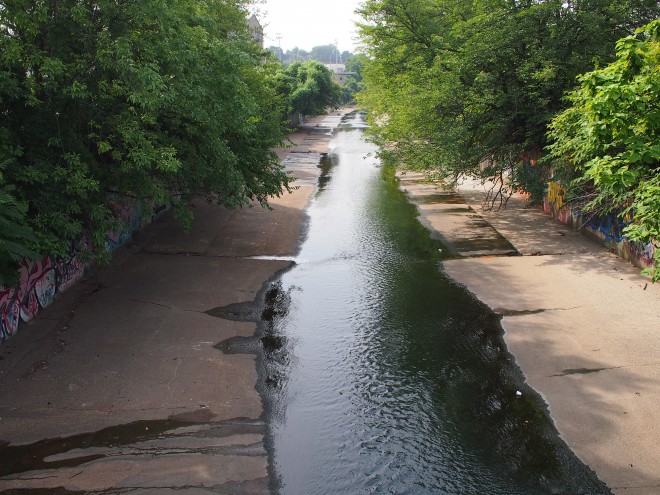 One model for the project is Delaware waterfront itself, where a trail, pocket parks, and natural stream banks have been inserted as funding and land become available.

The hope is that conservation of the creek’s ecology will catalyze preservation of the historic building stock alongside it. While some of the old industrial buildings will necessarily be demolished due to their derelict condition, others may be saved by private developers who could see renewed value in their proximity to the greenway for live-work spaces (akin to Globe Dyeworks, located a mile from the creek) among other uses. Real estate reinvestment, in turn, could churn up economic development. In anticipation of this rising real estate interest, Litwin is applying for historic preservation status for several buildings along the creek, including Tremont Mills at Adams Avenue and Wingohocking Street. 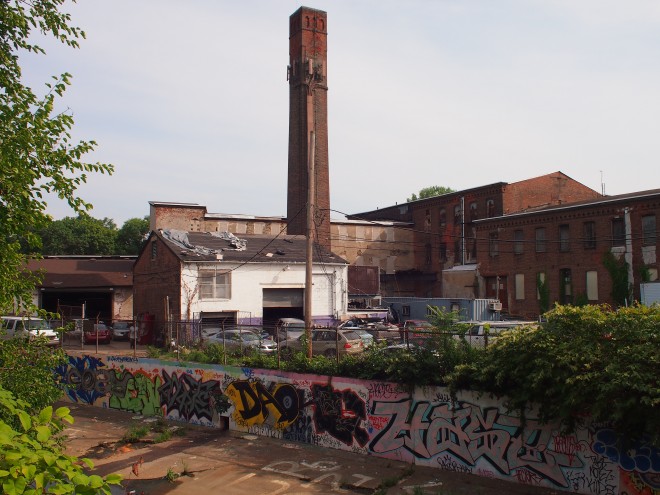 In addition to stormwater features, the greenway is also likely to include neighborhood connections, benches and trash receptacles, and other user amenities, according to Armstrong and Brugger.