The Original Made In America Festival 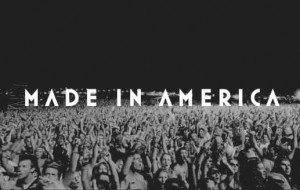 Labor Day Weekend’s Made in America festival promises two days of music, food, drink, and fun on the Benjamin Franklin Parkway. While the crowd at this, the first ticketed event on the Parkway, will be a fraction of the 500,000 who typically turn out on July 4th, the event is expected to attract some 50,000 music fans, with Jay-Z headlining the first night and Pearl Jam the second. Run-DMC, Skrillex, Drake, Meek Mill, Odd Future, Rick Ross, Jill Scott, D’Angelo and X are among the two dozen-plus acts on the bill.

As much as the festival is meant to put the city at center stage, we’re reminded of a rather more critical public spectacle, the 1788 Grand Federal Procession, which occurred in the same place and helped confirm popular support for a new federal-style government and constitution. The Grand Federal Procession certainly meant more to the city and nation than the 2012 Made In America.

Held on July 4, 1788, Grand Federal Procession of Philadelphia was a propaganda display on the part of Pennsylvania Federalists that linked the proposed U.S. Constitution with the celebration of the Declaration of Independence. Other towns and cities in the nation put on events called “federal processions” while the Constitution was being ratified, but Philadelphia’s affair was the largest and most spectacular of them all. 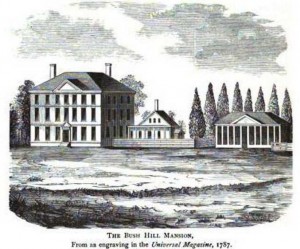 The one-day pageant began at Third and Cedar (South) Streets and wound its way three miles through Philadelphia to finish at the Bush Hill mansion located near present day 17th and Spring Garden Streets.

The parade was more than a mile and half long and comprised over five thousand people. A broad range of flag-waving artisans and tradesmen in 88 groupings participated in the event, along with bankers, clergymen, constables, doctors, foreign diplomats, lawyers, merchants, military officers and units, port wardens and customs collectors, Philadelphia court justices, students, and so on. Five of Pennsylvania’s delegates to the Constitutional Convention marched as well. 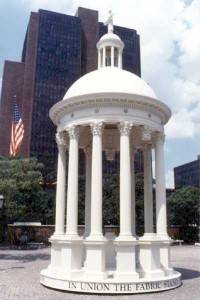 Reproduction of the Federal Edifice or “New Roof.” The Carpenters’ Company of Philadelphia recreated it for the U.S. Constitution’s bicentennial parade in Philadelphia (1987).

Teams of horses pulled several large floats built on carriages. One float was the Grand Federal Edifice, or “New Roof,” a circular temple devised by artist Charles Willson Peale. About 30 feet high, the structure symbolized the new federal government: 13 Corinthian columns–three incomplete or missing–supported a dome representing the national government. Peale’s concept was that without the unifying dome, the individual columns would topple.

Ten states that voted for ratification received columns; the three that had not yet voted (New York, Rhode Island and North Carolina) received unfinished columns or no columns at all. Atop the dome was a cupola, representing the new central government, crowned by the figure of Plenty holding her cornucopia. The motto “In Union the Fabric Stands Firm” was carved in the float’s base. Members of the Carpenters’ Company of Philadelphia built the Grand Federal Edifice.

Approximately 17,000 men, women, and children–half the city’s population–spread out in front of the Bush Hill manor house at the parade’s end. The estate occupied a large amount of land approaching the Schuylkill River immediately north of Vine Street (Philadelphia’s northern limit the time). The sprawling lawn sloped down towards Vine and the Schuylkill, as the house was located atop a rise (Bush Hill). This gentle incline is still visible today in the region between Callowhill and Spring Garden Streets, from 16th to 20th Streets. The future Parkway area was only steps away. 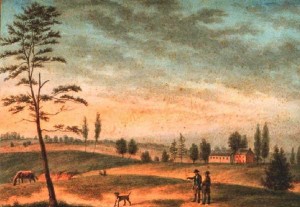 Supposed vicinity of the Bush Hill estate, site of formal ceremonies of the 1788 Grand Federal Procession. The Benjamin Franklin Parkway would be around the viewer’s point of view. Painting by August Köllner.

William Hamilton, owner of the Bush Hill manor, offered his grounds as the site of the pageant’s formal ceremonies. In the 1720s, the Penn family had given this property to Hamilton’s great uncle, attorney Andrew Hamilton (the “Philadelphia Lawyer”), in payment for legal services. The elder Hamilton built the Bush Hill mansion in 1740. He left the entire estate to his son, James, who in turn passed it to his nephew William. The house’s location today would be near the old Philadelphia Mint building, now being used by the Community College of Philadelphia.

In 1790 and 1791, a few years after the 1788 procession, John Adams lived at the Bush Hill mansion while serving as Vice President under George Washington. Abigail Adams, who was with him, wrote of the lands: “A variety of fine fields of wheat and grass are in front of the house, and, on the right hand, a pretty view of the Schuylkill presents itself.” Furthermore, during the yellow fever epidemic of 1793, a quarantine hospital was set up in the manor house. This is where Stephen Girard first made his mark–as administrator of this hospital.

Back to the 1788 Grand Federal Procession: The highlight of the celebration was an oration from the “New Roof” by Judge James Wilson (1742–1798). Wilson was a signer of the Declaration of Independence and a major force in drafting the Constitution.

Like the 2012 event (sponsored by Budweiser), food and drink was an important part of the 1788 Grand Federal Procession. A huge feast followed at Bush Hill, with casks of porter, beer, and cider. Ten toasts were drunk in honor of the ten states that had ratified the Constitution. A cannon was fired at each toast and another cannon was fired in response by the ship Rising Sun, lying a few miles away in the Delaware River with ten other decorated vessels as part of the festivities. These ships were illuminated in the evening. 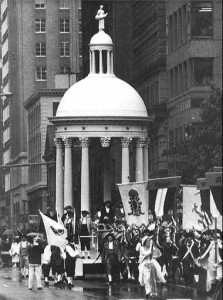 The Federal Edifice was later paraded in Washington, DC, as part of the presidential inaugural parade for George H. W. Bush (1989).

Altogether, Philadelphia’s Constitutional Procession on July 4, 1788, was the largest civic event in America up to that point. It was organized in only a few days by Francis Hopkinson, with help from many important Philadelphians of the day, including Charles Willson Peale, journalist Benjamin Franklin Bache (grandson of Benjamin Franklin), and composer Alexander Reinagle. The entire expense was borne by voluntary contributions from those who marched in the parade and partook in the ceremonies at Bush Hill.

Members of the Carpenters’ Company of Philadelphia subsequently constructed two replicas of the Grand Federal Edifice (“New Roof”). One was made in 1887 for the centennial commemoration of the U.S. Constitution. The other was made a hundred years later for the Constitution’s bicentennial parade in Philadelphia on September 17, 1987.

Director Ron Howard and Brian Grazer will be shooting a documentary of the 2012 Made in America festival. It’s too bad we can’t see a recording of the 1788 Procession–the first and most important “Made in America” event on the Parkway.