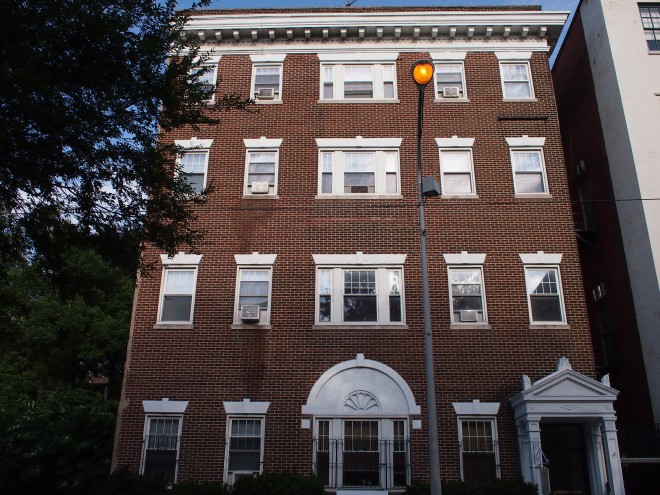 The charity impulse practically shuddered through the Victorian salons and Quaker meetinghouses of the 19th century, finding its greatest fervor in the hearts of women, who must have thought they could save the world. (We’ll let you decide if they were well-intentioned, racist, or just delusional–or all of the above.) And this staid apartment building next to Louis Kahn Park in Washington Square West was at the center of it, first as a female-run home for Civil War orphans and later as a pioneering Indian training school. And yet its quite important role in the movement to assimilate Native Americans has been almost entirely ignored. The Pennsylvania Museum and Historical Commission hasn’t placed a marker here and the Commission’s listing even has the facts wrong.

In February, 1856, Miss Mary McHenry, sister of railroad tycoon James McHenry, began a charity called the Church Home for Children, an organization that was created to house and educate orphans, or “friendless children.” She ran the charity out of her home at 1902 Chestnut Street. Then the Civil War began, and, well, orphan production soared. McHenry saw the need and adapted the mission of her Home, chartering the Lincoln Institute on May 9th, 1866, exactly a year after the end of the war. 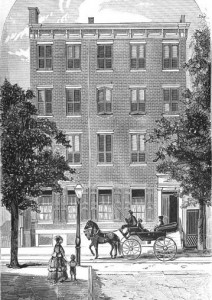 The Lincoln Institute in 1877

The Institute captured the attention of General George Meade and he, along with McHenry, raised the funds necessary to make alterations and additions to a large donated mansion at 308 South 11th Street (address later changed to 324) for the housing and education of 100 soldier-orphaned boys, ages 12-21. The boys would be set up with apprenticeships outside the school and eventually be discharged once they were able to support themselves.

In 1871, a separate home under the same administration was set up on a large plot at 49th and Greenway streets for veteran-orphans aged 3-12 who would transfer to the Lincoln Institute when they came of age. They called it the Educational Home for Boys. The Lincoln Institute was considered the fashionable charity of choice by wealthy women philanthropists of the period. Despite having George Meade as president for the first few years, the organization was almost entirely run by women.

By the end of the 1870s, there were few Civil War orphans left young enough to qualify for the Institute. In 1881, the school transferred its remaining residents to the 49th and Greenway campus and put the 11th street building up for sale.

The next year, Captain Richard Henry Pratt, founder and superintendent of the infamous Carlisle Indian Training School, visited Philadelphia in order to show off his most successful students at the parade celebrating Philadelphia’s bicentennial. For the duration of their visit, the students were housed at the 11th Street building of the Lincoln Institute. Mary McHenry and her colleagues were so impressed with the performance of the students that they decided to re-open the Lincoln Institute as an Indian boarding school.

Captain Pratt loved the idea and expedited the Institute’s request for funds from the Department of the Interior’s Bureau of Indian Affairs. On August 29th, 1884, 324 South 11th Street re-opened as the Girl’s Home of the Lincoln Institution and the 49th and Greenway campus became the Boy’s Home. Though government funding was the primary source of funds, much of the school was paid for by voluntary contributions. At this point, it was no longer considered a women’s charity and the most money came from millionaire best friends Anthony Drexel and George W. Childs.

The school was run on the same model as the Carlisle School. Students had their names changed, hair cut, and were prohibited from speaking their native languages. At the 11th Street campus, girls were taught to bake, sew, wash, iron, and make dresses. When they came of age, the girls would be placed into jobs on farms and estates. In order to avoid the city’s “summer epidemics,” from June to September each year the girls were brought to a 10-acre retreat called Pomonah, on George W. Child’s land two miles north of Wayne, Pennsylvania. 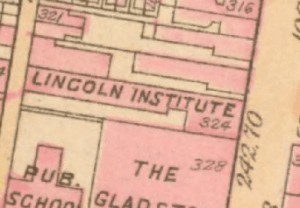 Despite the forced cultural assimilation and conversion of Catholic children to Protestantism and reports that the school exaggerated its students’ prowess in the 1887 Philadelphia Industrial Parade, the Lincoln Institute wasn’t quite as infamous for abuse and malfeasance as the Carlisle School. Then, in the 1890s, in a slight ideological shift–you don’t realize what you have until it’s too late–scholars became interested in studying the traditions of the rapidly disappearing native people. Industrious themselves, and perhaps just a bit hubristic, the researchers sought out to record the mores of every individual tribe before they went extinct.

Conveniently, the Lincoln Institute had, under one roof, representatives of more tribes than any other school. Great news for the researchers, who thoroughly studied the Lincoln students. The fervor of documenting native people so excited Mary McHenry, she spent the rest of her life traveling the country and writing books about the native people.

Often enough the Lincoln Institute was held up as a grand example of native assimilation into American society, and was the constant subject of tours and inspections by government officials, wealthy philanthropists, and Indian representatives. Accounts by students indicate that many of these visits were a farce–the school’s leadership would present older students as younger to seem more impressive and show off store-bought items as goods being produced by students.

In 1902, the federal government stopped funding Indian boarding schools. The 49th and Greenway campus was sold of to enable the Lincoln Insitute’s Girl’s Home and Pomonah summer retreat to continue. Mary McHenry and her estate would fund the school for the rest of its existence. In 1911, the rear segment of the 11th Street building, which stretched all the way to Quince Street, was demolished, and by 1912, was replaced with a four story addition designed by the Bissell and Sinkler firm. The addition would have a giant chimney, tall enough to clear the 11-story Gladstone Hotel that once stood next door. 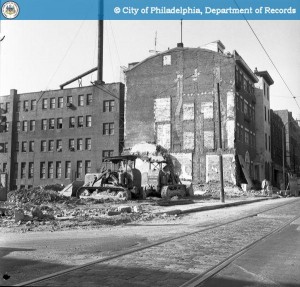 Exposed in 1971 with the destruction of the Gladstone Hotel. Check out the chimney. | Source: PhillyHistory.org, a project of the Department of Records

In 1915, the Lincoln Institution merged with another organization that would in turn merge with the Big Brothers Association in 1926. They sold the old Girl’s Home building the same year. After that, the building became the Sovereign Hotel which would later devolve into a day-rate apartment house as the neighborhood decayed in the middle 20th Century. It would join the Gladstone, Carlton and Colonial Hotels in an 11th Street row of slummy hovels until the neighborhood was revitalized in the 1970s and 80s.

Now apartments, the building is called Clinton Place. The space created by Kahn Park next door gives the building a noticeable countenance it never had when it was hidden behind the old Gladstone Hotel.