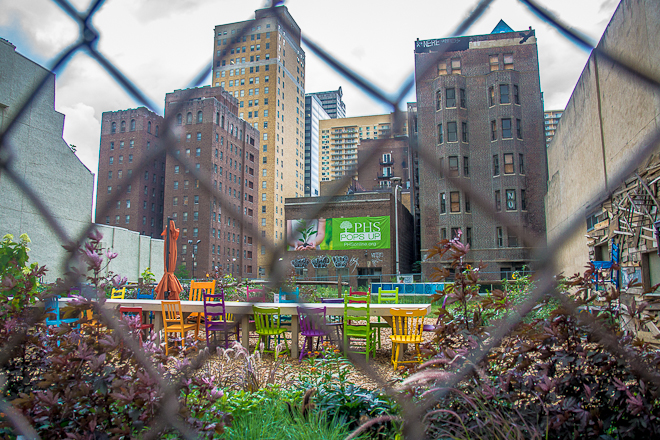 The Rittenhouse Square pop-up garden recently created by the Pennsylvania Horticultural Society reminds me of a school playground at recess; you’re only allowed there at appointed times, and there is lots of grownup supervision. But like recess, once you finally get to the pop-up garden at 1905 Walnut Street, it really is fun.

Like the school playground, the garden, in a repurposed vacant lot that’s been languishing for years, is meant for education as much as play. The folks at the Horticultural Society have set out to educate, bring awareness of the issue of food security, and provide space for passive recreation and the contemplation of the sensory delights of the garden. At this, they have succeeded.

Truly public gardens–think the Rose and Magnolia Gardens in Independence National Historic Park–can be a discouraging business for serious plant people; high-traffic public spaces can only be serviced by the toughest, most basic horticultural installations selected and installed for indestructibility. Aesthetics and creativity are by necessity relegated to the sidelines. Even then, the odds are against such spaces functioning remotely like a garden–it’s a jungle out there. 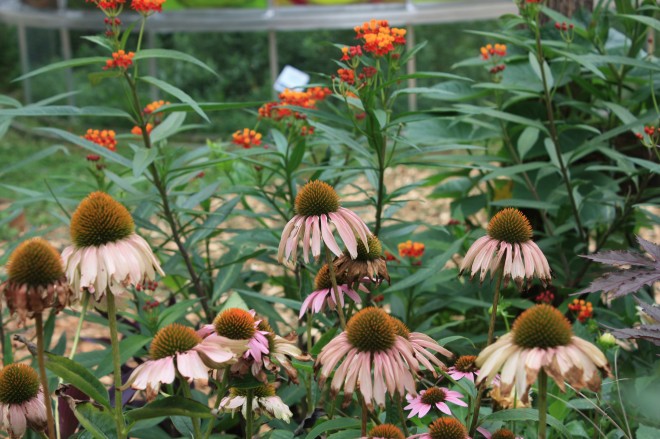 While there’s something less inherently lovable about restricted-access gardens, they are more likely to be successful landscapes. On Walnut Street, inside the existing chain link fence, PHS has created gorgeous deep beds of ornamental shrubs and colorful herbaceous plants are interspersed with food crops like rainbow chard and hot peppers. The plant selections are cleverly designed, using lots of new introductions to create zingy color and textural combinations.

But unlike many demonstration food gardens, a visitor will not feel the invisible hands of the designer on their shoulders, exerting her to drop and genuflect in at the base of the open-pollinated okra or the heirloom variety Indian corn. In this garden, the plants themselves are a backdrop to the centerpiece, a series of wooden tables placed end to end, lined with mismatched, brightly painted chairs. On my visits, I saw people at the table checking their smart phones, playing chess, eating lunch, and reading. 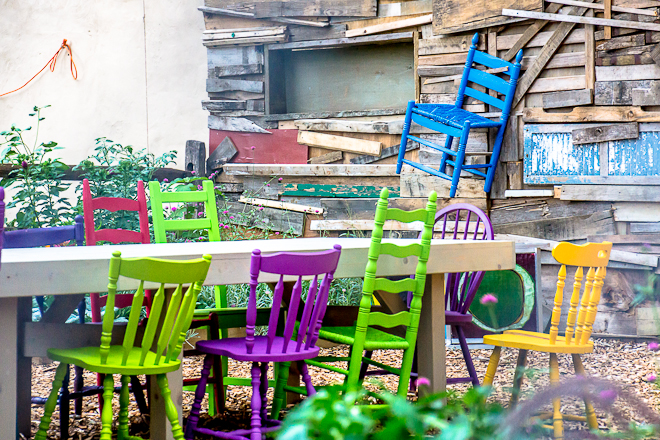 During open hours, PHS staff and volunteers are onsite to provide garden interpretation and information about their excellent City Harvest program, which supplies fresh produce to needy families. Some people loathe the idea of being guided in a public space, and would rather get their info from an app or a brochure. Fine. There are small informational placards placed in the garden and an information table next to the entrance. But for those who enjoy engaging with knowledgeable people, it’s fun to learn the names of individual plant cultivars or get information about the artists whose sculptures anchor the urban meadow at the rear of the garden.

It’s a confident approach. By allowing the visitor to engage as much or as little with the garden as she may care to, a certain degree of messaging opportunity may be lost. But The Omnivore’s Dilemma came out six years ago, and at least for now the food desert/urban ag/locavore message may have sunk in as much as it’s going to. If you haven’t heard that eating apples from New Zealand is a zero sum game, or that there’s a devastating link between poverty and poor eating habits, there may be other things for you to worry about. 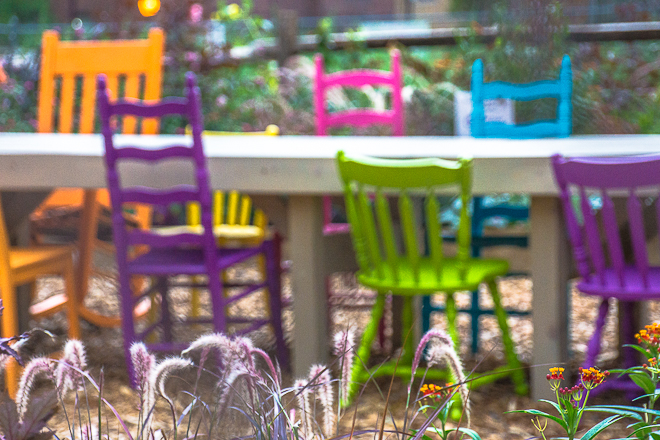 Unlike PHS’s grand dowager, the Philadelphia Flower Show, who is rumored to have lost her innocence after a sherry-soaked cotillion back in the 1950s, there’s something very un-jaded about the Pop Up Garden. Sure, it has a corporate sponsor, Chipotle, but don’t look for the logo made out in chili pepper plants. This garden is a generous offering to the citizens and doesn’t demand anything particular in return. Pedagogy comes after pleasure, which is true of every really good garden I’ve ever visited.

Last year’s pop-up garden took up a portion of the enormous empty lot at 20th and Market. Now this property is under agreement for development. Will this year’s temporary garden generate new interest in this longstanding chunk of urban blah? The real estate world is uncertain, but PHS would like to think it might help, and they could be right. Introducing life into dead spaces is surely one way to make us pay attention again. 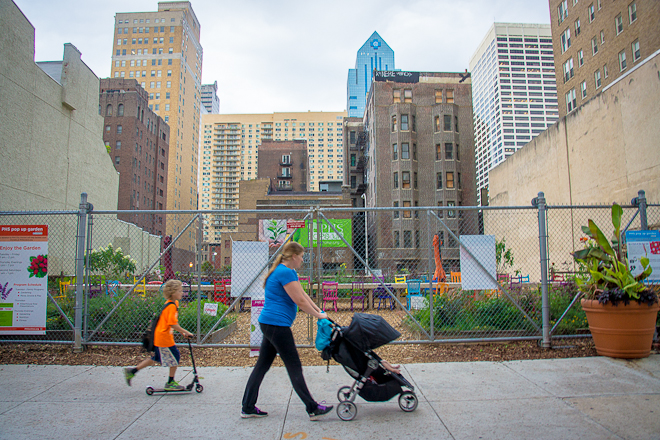 PHS Pop Up Garden, 1905-15 Walnut St. Open Tuesday-Friday from 11 am to 2 pm; Thursday evenings from 5-7; and the second Saturday of the month from 9 am to 1 pm. A farmers market takes place every other Friday from 5-7. For information about programming and renting the garden for private events, click HERE.