On Banker’s Row, Red Brick Paving Was Good As Gold 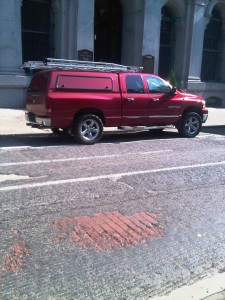 The sub-surface of red brick exposed on Chestnut Street. The former Bank of Pennsylvania at 421 Chestnut Street is the background. Dating from the 1857, the building was purchased by the Philadelphia Bank in 1859 following the Panic of 1857. It is now the Bank Building Residences at the Omni, with designer units priced from $1 million. Chestnut Street and its banks still have some cachet.

Recent repaving work on a few blocks of Chestnut Street in Old City has exposed red brick pavement. The bricks seem to be in relatively good condition–except where the milling machine itself has gouged the bricks.

The street was originally named for Thomas Wynne (1630-1692), William Penn’s friend and personal physician. Dr. Wynne was one of the first purchasers of land in Philadelphia; his lot along the Delaware River was at Front Street. Besides being a physician, Wynne was the President of the first Provincial Assembly and was also a prominent Quaker preacher.

Wynne Street was changed to Chestnut Street when the other parallel streets were given tree names (naming the streets for settlers violated the Quaker sense of modesty). By the 1790s, Chestnut Street lay in the center of the most densely populated section of Philadelphia.

The stretch from Second Street to Fifth Street was home to several commercial banks that helped finance the development of the early United States. They lent money for government projects and for private investment in industry, exploration, and general trade. With the US central bank–the Bank of the United States–nearby on Third Street, Philadelphia was the financial capital of the nation, Chestnut Street the Wall Street of the early republic. 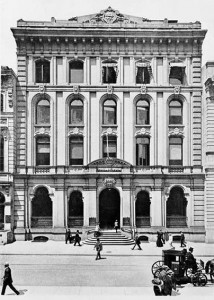 The Second Bank of the United States, the Bank of North America, and the Bank of Pennsylvania became the largest financial institutions on what would be called “Banker’s Row.” Bankers strove to occupy the biggest and most secure-looking building on the block.

Chestnut Street was also home to the country’s first and most important business and banking periodicals. These papers reported on current prices, the names of ships entering and leaving port, and political news critical to the economy.

Chestnut Street reigned until Andrew Jackson became president in 1829, seeking to destroy the power of the urban elite. The “Bank War” of the 1830s effectively ended Chestnut Street’s reign as America’s leading financial district. This “war” was Jackson’s politically-charged effort to kill off the Second Bank of the United States. 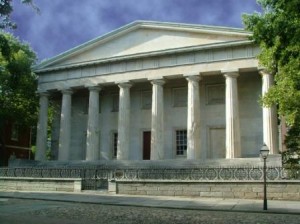 The south facade of the Second Bank of the United States, designed by William Strickland and built between 1819 and 1824.

Andrew Jackson vetoed the renewal of the Second Bank’s charter in 1832, as he viewed it as a private institution that was, in essence, a monopoly. The president ordered all federal deposits withdrawn and announced that US funds would no longer be deposited in the bank effective October 1, 1833. In retaliation, the bank’s president, Nicholas Biddle, began calling in loans from across the country, engineering a financial crisis. The move ultimately backfired when angry businessmen and farmers started blaming Biddle and the bank.

President Jackson triumphed in the Bank War–which helped define the party ideologies that endure today–by the mid-1830s; the ensuing Panic of 1837 was the result. For more about how the commercial banks on and around Chestnut Street ruled the nation’s financial system, see Robert E. Wright, The First Wall Street: Chestnut Street, Philadelphia, and the Birth of American Finance (2005).

This all might explain why Chestnut Street, from Second to at least Fifth, was paved with red bricks. This street surface was more expensive to lay down (by hand) and resulted in a more visually attractive thoroughfare. Such a surface is also quieter, as wagon wheels hardly made any noise on a brick-paved street as compared to one paved with Belgian blocks. 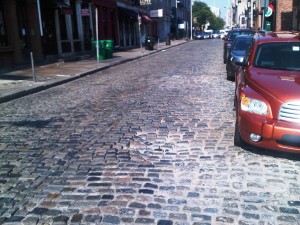 The Belgian block surface of the 100 block of Chestnut Street.

Despite the loss of its national banking power, Chestnut Street continued to be Philadelphia’s chief banking and business zone for the rest of the 19th century. By the 1880s, almost all of the banks on Banker’s Row, as well as most of the insurance companies on Walnut Street near Fourth, had been rebuilt and enlarged. It’s as if the banks and insurance companies thought that the city’s business district would not follow the legal services and law firms that were decamping for areas further west in anticipation of City Hall’s completion.

The 100 block of Chestnut Street is unaffected by the current-day repaving project, as this section was paved with Belgian blocks in 1940. This segment of Chestnut also retains much of its old commercial look from 130 years ago.