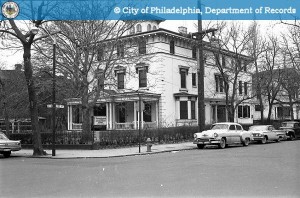 Samuel Sloan’s rather quiet Italianate designs found a welcome audience among mid-19th century Philadelphians. The houses, schools, and churches integrated well with the city’s Quaker influenced aesthetic, lending it a bit of elegance and a hint of the timelessness of the Old World. And so they endured through countless shifts in taste and architectural theory.

“Between the heydays of Thomas U. Walter and Frank Furness,” says preservationist Aaron Wunsch, “Sloan was Philadelphia’s most important and, probably, most prolific architect. He did more to shape the new fabric of Consolidation-era Philly and environs than anyone else. Mansions, twins, schools, courthouses, and whole neighborhoods bear his stamp, and so do many of the most important ‘therapeutic’ institutions of the era, notably mental hospitals, like West Philadelphia’s Kirkbride Center.”

But in the last year, two of Sloan’s buildings in West Philadelphia, where he was particularly active, were put in danger: the 40th Street Methodist Episcopal church at 40th and Sansom Streets and the mansion at 40th and Pine (pictured above) that has been the subject of a long-standing battle among the University of Pennsylvania, developers, neighbors, and preservationists. The owners of both of these buildings have secured demolition permits. 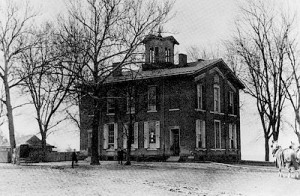 Now there is a third, Sloan’s last remaining schoolhouse, on Old Bustleton Avenue in the Northeast. The schoolhouse, which has been much altered and literally overwhelmed by a 1915 addition, is the only building on the National Register of Historic Places in zip code 19115. Federal Register status offers no protection from demolition, only the possibility of accessing historic tax credits for restoration.

The school building is part of the K-8 Politz Hebrew Academy. The school has no public plans for the land where the Sloan building now stands. The Bustleton Civic League opposes the demolition, according to an official of the Preservation Alliance of Greater Philadelphia, but once a demolition permit has been issued, it’s generally hard to reverse the process.