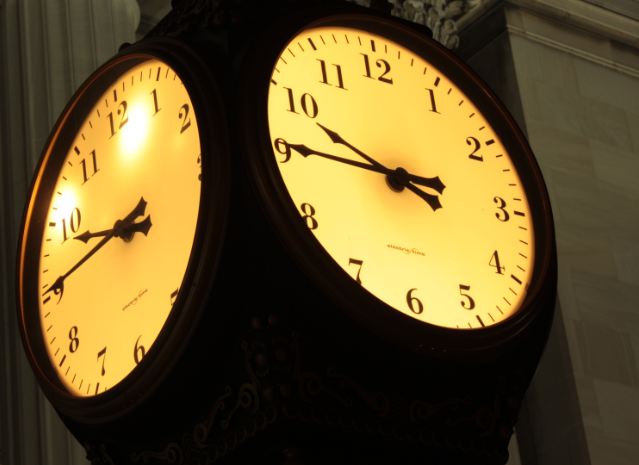 Editor’s Note: As we gear up for the first anniversary of the Hidden City Daily, it seems we have time on our minds (not on our hands, unfortunately). So we we’ve asked contributor Philip Jablon to make a little game: Name This Clock.

The public clock is a prominent feature on a wide array of structures. Most Philadelphia buildings featuring clocks on their exterior date from the mid-19th through the mid-20th century–the city’s most productive manufacturing years, when time indeed became money and life became structured according to factory shifts, school hours, and train schedules. From churches to factories, government buildings to retail stores, time pieces graced many a façade, steeple and cornice. Some buildings placed a free-standing clock on the grounds of their property. Later, into the 20th century, signmakers often incorporated a clock into a business’s sign.

Whatever its form, starting today, once a week we’ll feature a photo of a public clock. The idea behind this little memory exercise is to encourage you to think about the diversity and beauty of Philadelphia architecture and, of course, our often under-appreciated analog clocks. We start our game with the fairly accessible clock you see above (but beware, like life itself, the game will grow more difficult as time passes along).

The name of each person who correctly identifies the clock’s building and exact location by 11AM Wednesday, August 8 will be entered into a drawing. The winning name will receive a free annual membership to Hidden City Philadelphia. (Sorry, Hidden City Daily contributors are not allowed to play.)

Submit your answer to editor@hiddencityphila.org. Next week, when we present Name This Clock #2, we’ll reveal the winning entrant and information about this week’s clock.