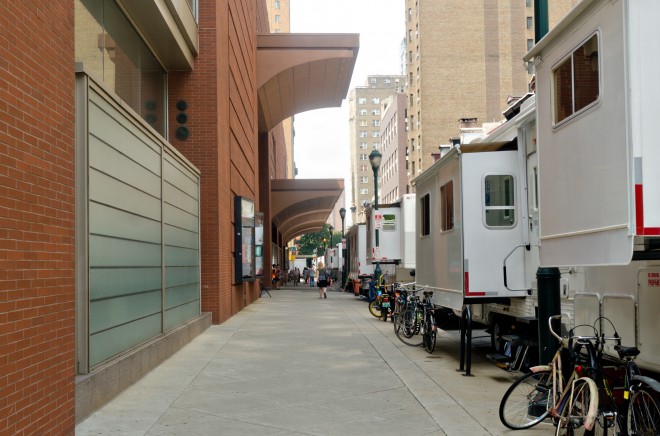 Walk around the city of Philadelphia these past few months and you’ll find it’s one big film prop. Massive caravans of long, white and silver trailers, food tents and a thick spaghetti of electrical cables line city blocks. Film, TV and advertising productions are on the rise here, thanks in part to the diligence of the Greater Philadelphia Film Office. The city becomes a set for few feature films each year, but TV commercials and reality shows also bring work to those in the industry here.

With the on again Pennsylvania film tax credit and the city’s versatile range of landscapes and architecture–from neighborhoods to high rises to suburbia in close proximity–the film industry is presently active. On some days, every grip, make-up artist, and production assistant in the city is booked. “The city doubles for New York and Washington, DC on a regular basis,” says Sharon Pinkenson, longtime executive director of the Philadelphia Film Office. Paris, too, she notes, has been evoked here in the courtyard of City Hall and 12th & Camac Streets was once transformed into a Parisian back alley.

“We’re the rainmakers, the ones that bring in the business based on a script or a storyboard,” Pinkenson explains. Often thousands of photographs from the Film Office image bank are sent out to film prospects considering Philadelphia locations. Any location proffered, though, is carefully vetted since it would be a big mistake to “sell” a location that turns out not to be available for a host of other reasons.

Film location scouts are first to pick up the lead. They are urban visionaries who seek the fantastic within our same-old streetscapes. Or so I thought. An interview with Philadelphia film location scout Bill Arrowood about his trade ended up with a revelation. He’s not just finding potential in the city but also the potential of the city. 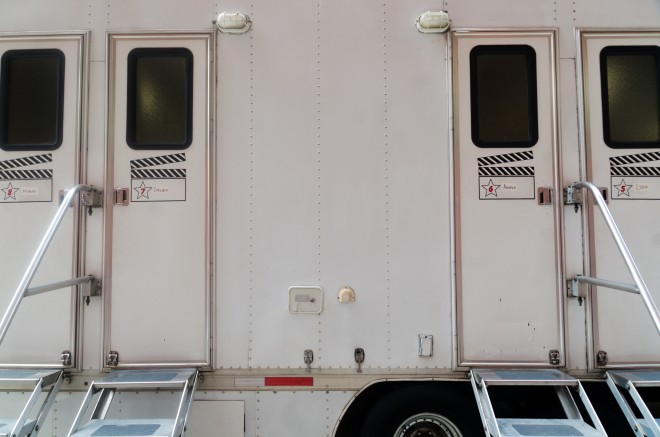 “I’m never lost, I’m just scouting. I’m never working, I’m always finding. I love it!” Arrowood tells me. He’s been at it 15 years. Originally a film student, he found he wasn’t right for other industry positions–and besides, location scouting isn’t something for which you can go to school. The dozen or so film scouts in Philadelphia are a collegial bunch. “We are blessed to have smart location people who care about their city,” he says.

“The film business is a snow globe. My job is to be the glass that keeps all the junk out,” explains Bill. He has to, simultaneously, bridge the real world and protect the make-believe world so, when the film wraps, everyone is happy.

“My work allows me to explore strange new worlds, alien beings and civilizations,” he says. He is made for film scouting with a good eye, a good memory for people and places, a fearless charm upon entering any community no matter how “bad,” a flair for architecture and design and, above all, a preparedness to do anything…cleaning toilets, too.

Bill’s advice for would be scouts: “keep your eyes open, don’t be afraid to go places. Eat the local food, have some coffee at a cafe, soak it in, walk like you live there. It serves you well.”

Arrowood grew up in the small town of Chestertown, population about 4,000, on the Maryland shore. “I’ll always have small town in me,” he says, naturally applying the intimacy of small town interactions to the big city of Philadelphia where, well, people are still just people.

“A Location for me isn’t about the buildings as they are going to be there after I leave, though there are plenty of remarkable ones around every corner, but moreso by the remarkable people I have met inside them.

“A couple of years ago I found a tiny magic theater called Grasso’s, built into the back of a row house, when the owner approached me while shooting a completely different kind of thing. It’s so out of place and wonderful, it was literally like magic. A bar that you shot in five years ago will remember you and treat you like a regular.”

He says the relationships have shrunken the scale of the big city down to “one cozy neighborhood where I can send Christmas cards to locations and wave in the street to friends that I otherwise never would have had the chance to meet.”

His belief in relationships extends to the city itself. “The parks are broke, the churches are broke, the schools are broke,” Arrowood says. But, he continues, “Philadelphia is becoming a better city every year.” He aims to donate ten percent of his fee to community-based organizations and initiatives.

“I see the richness and friendliness. Amazingly kind people working very hard to make things better. You have to start with a belief that it is a good place. There are a lot of diamonds out there, a lot of diamonds.”