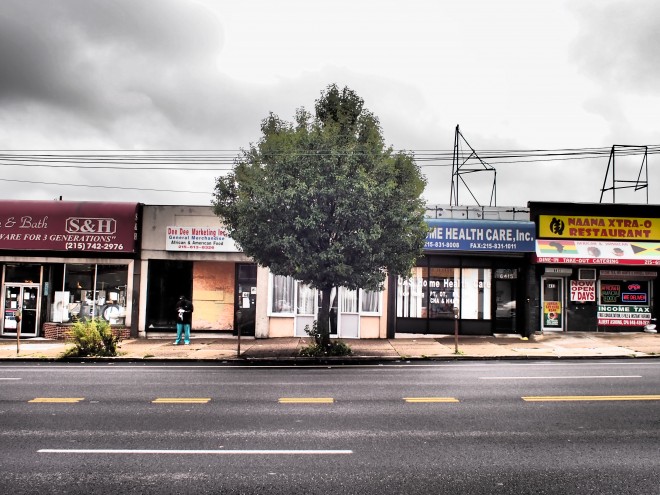 Editor’s Note: As readers have pointed out, Frankford, Northwood, Lawncrest, Sommerdale, and Oxford Circle have for some time been known collectively as the “Near Northeast.” Over the past decade or so, and particularly in the process of the city’s 2035 master plan, that term has been replaced by “Lower Northeast.” Though it may not ring true to some ears, we’re going to stick with it for consistency. The draft of the Lower Northeast District Plan will be released on Monday, August 21.

Castor Avenue in the Lower Northeast should be one of the liveliest neighborhood centers in Philadelphia. Surrounding neighborhoods like Oxford Circle have seen strong population growth for decades, mostly due to a diverse influx of immigrants. But the mostly one and two story business corridor is limited in both scale and usage by current zoning regulations. In a move that is likely to meet some resistance, the Philadelphia City Planning Commission is putting forth recommendations that would see the avenue bustle with new residents and day-to-night activity, namely by encouraging pedestrian oriented mixed-use development through additional density.

Change is not always welcome in this area of the city which has seen little alteration to the built environment since rowhouse blocks emerged from farmland in the 1940s and 1950s. Stability is one of its main drawing points.
But change has come. The area has gained an average of over 1,000 residents a year for the last two decades. Much of this growth has been accommodated by the rapid conversion of single family homes into multi-unit apartments. And individual households are bigger too, set off by a spike in the percentage of the population under 20 years old. 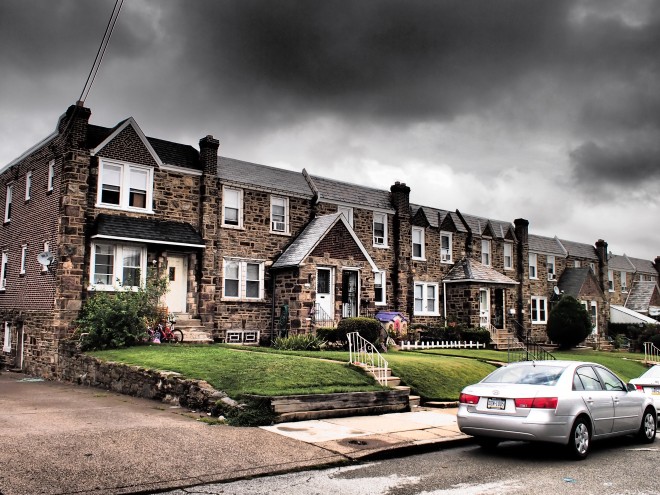 Growth has brought with it racial change. In 1990 over 80 percent of residents in the Lower Northeast were white. Today the district is one of the most diverse in the city, with sizable African American, Latino, Asian, and numerous other immigrant communities. However, population growth has not contributed to economic gains. In fact, home ownership has declined as poverty levels rise, causing fears about long-term neighborhood stability among existing residents. Some kind of intervention is necessary if these fears are to be addressed.

The city projects that population growth will continue. In response to input from public meetings, PCPC has highlighted the Castor Avenue corridor as a priority area to direct development that harnesses this growth to create a thriving neighborhood destination. By recommending that the corridor zoning be changed from an entirely commercial district (CA-2) to a moderately denser neighborhood commercial mixed use designation (CMX 2.5), demand for housing could be accommodated on upper floors giving the avenue 24-hour activity, thereby increasing safety and creating a critical mass of shoppers for businesses. The change in designation would encourage walkability by allowing for pedestrian oriented retail as of right. The city also plans to work with existing businesses on Castor Avenue to set-up a corridor management organization to maintain safety and improve the streetscape. 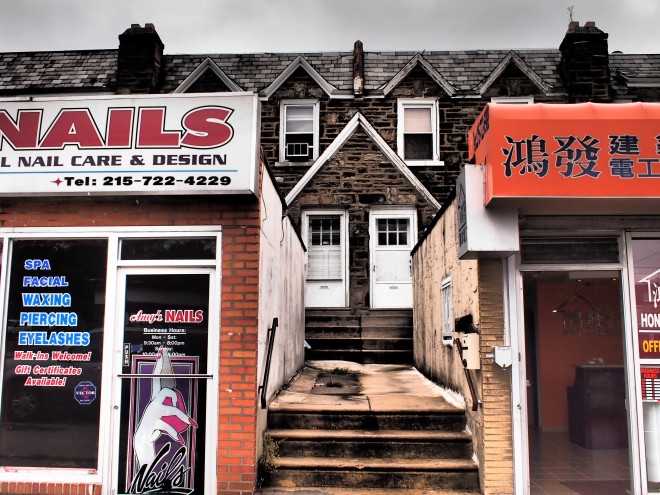 Critically, the planning commission seeks to respond to public concerns by recommending the rezoning of the surrounding housing stock from multifamily residential (RM-1) to single family attached residential (RSA-5), conserving the existing character of the rowhouse blocks by preventing further apartment conversions.

Planning Commission staff presented draft recommendations for the Lower Northeast District Plan at a final public meeting last Tuesday evening at the Globe Dye Works in Frankford. This is the third district plan out of 18 that the city will complete over the next several years building on the citywide vision put forth in Philadelphia2035 (adopted in 2011) that calls for activating the public realm through better design, additional parks and green streets, increasing transit use, promoting public health and encouraging development that builds upon trends in population and employment growth. The district plans provide a detailed blueprint to implement these goals by proactively directing the agenda for the zoning remapping process that is ongoing with the enactment of a new code, which becomes effective on Tuesday, August 22nd, as well as setting priorities for capital improvements and public-private partnerships.

The district plan also seeks to leverage and improve upon the extensive transportation infrastructure in the Lower Northeast, an area known for auto-dependency, but actually well served by transit. Dissected by Roosevelt Boulevard and anchored on the eastern edge by the northern terminus of the Market-Frankford elevated line, the district is the gateway between the Upper Far Northeast and Center City. 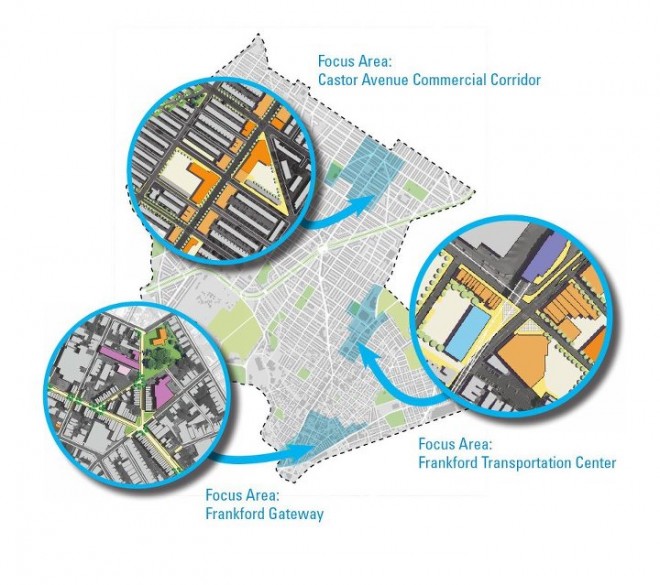 The Frankford Transportation Center services more than 730,000 people within one transit trip, making it one of the busiest stations in the region and thus it has the potential to be developed as a destination, rather than a just a point of departure. As such, public realm improvements to the area surrounding the station are recommended as an early priority for investment. Drawing upon the experience of The Porch at 30th Street Station, PCPC recommends enlarging and activating the plaza at the station entrance by reclaiming space currently used for auto traffic in order to enhance public safety and encourage transit use.

In addition, the plan calls for improvements to storefronts along Frankford Avenue and a full build out of the surrounding lots with new mixed use development, again to encourage pedestrian activity. But while the Frankford hub may seem like a prime candidate for the new Transit-Oriented-Development zoning overlay, which allows for high density at transit stops to encourage pedestrian activity, the market simply does not exist to justify such a change. Ian Litwin, community planner and project manager for the Lower Northeast plan, noted that the recommendations call for only a moderate increase in development because of limited demand.

Additional recommendations to strengthen transit use through redevelopment focus upon the branding of East Frankford as an Artisan Industrial District–with public realm improvements along Frankford Avenue and Church Street, and reclamation of the land adjacent to Frankford Creek for park space and a greenway connecting to the existing Womwrath Park (see our report on the greenway proposal tomorrow). A number of historic industrial buildings abut the creek and are strong candidates for preservation designation and adaptive re-use as live-work or industrial commercial spaces, following the model of the Globe Dye Works, which has brought new economic and cultural activity to the area.

Lighting and public art installations along Church Street between the Frankford Avenue El station and Torresdale Ave, including the development of pocket parks on currently vacant land would encourage pedestrian activity and establish the corridor as the center of the district. However, enhancing the tunnel-like environment of Frankford Avenue beneath the elevated train with streetscape improvements alone may not be sufficient. Currently commercial vacancy rates are above 50 percent. The commission is further examining the possibility of instituting greater building setbacks for future development along the avenue to enhance open space and improve perceptions of safety. 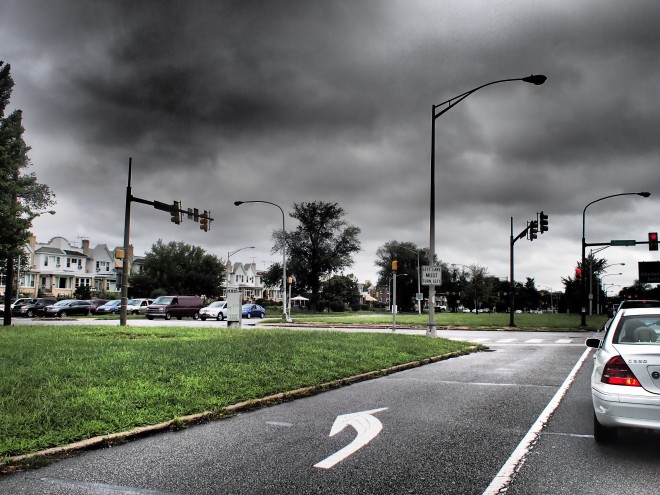 Perhaps the biggest question left unanswered by the presentation was the future of Roosevelt Boulevard. As has been the case for some years, details for potential transit improvements to the Boulevard were limited at this stage of the planning process, with a call for additional study of the alternatives and circulation redesign to encourage more pedestrian and bicycle use. However, the increase in population reinforces the case for some kind of improvement. Text message based surveys facilitated by Code for America revealed that a vast majority of respondents would utilize rapid transit service to Center City.

The recommendations presented are both progressive and feasible, provided that strong private partnerships can be identified and cultivated to transform the plan into action. This may be the biggest challenge for the Lower Northeast as it is not as well served by community development and business organizations as other areas of the city.

It is unclear if the City has the resources necessary to help launch such organizations from the ground up. More details on implementation will be clarified as the plan is finalized over the next few months. An information only presentation of the draft plan will be made at the Planning Commission meeting on August 21st. A public comment period remains in effect with the expectation that the Commission will vote the final plan into acceptance at their October meeting.