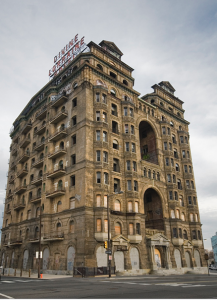 Developer Eric Blumenfeld appears to be close to acquiring the note on the Divine Lorraine hotel held by Amalgamated Bank, several sources say, and has plans to acquire the property at Sheriff’s sale. The New York City-based bank holds the note on the property because local developer Michael Treacy and investors from Michigan and the Netherlands have defaulted on the loan.

Hidden City took part in a tour of the building in late July with staff members of Blumenfeld’s firm EB Realty Management Corporation, a representative of the historic preservation consultancy Powers & Company, Reading Terminal Market director Paul Steinke, and others who hope to see the long-languishing landmark resurrected.

Blumenfeld seems to be much closer to moving forward with a a deal than he was in March when he floated a plan to create a combined high school campus behind the Divine Lorraine for Franklin Learning Center, Parkway, Masterman, and Benjamin Franklin High. No word on whether that plan, which would be extremely complicated in terms of financing, logistics, and politics, has moved forward.

If the school campus plan isn’t successful, some sort of “envelope” of new development will still be needed around the Willis Hale-designed building, probably in the form of condos or apartments–and a lot of them. The previous developer planned to build 900 units on the adjacent parcels. Receiving federal historic tax credits will be critical to making the numbers work, which is why Blumenfeld is talking with Powers & Company, although he has yet to retain the firm. The building is on the National Register for Historic Places and became the first integrated hotel of quality in the country after Father Divine’s International Peace Mission Movement purchased it in 1948.

Another small chunk of money might come from the State of Pennsylvania’s new historic tax credit program, which could be tapped for as much as $500,000, although a considerably smaller sum is more likely since there is only $3 million in the statewide program’s budget. With Treacy and company owing approximately $700,000 in back taxes, some form of tax relief or incentives from the City of Philadelphia may also be part of the equation.

This would be the second time Blumenfeld has owned the Divine Lorraine if a deal goes through. Blumenfeld bought the property from Tony Goldman in 2003 for $5.3 million, and sold it, along with parcels of adjacent land, to Treacy and his investors in 2006 for $10.1 million.

Even as the Divine Lorraine has been stuck in development limbo, the neighborhood around the building has continued to improve, thanks in part to Blumenfeld himself, who redeveloped the former Botany 500 clothing factory at 640 N. Broad Street in 2007 and the Biberman Building at 15th and Mt. Vernon in 2011 into high-end loft apartments. New condo development has moved steadily east down Fairmount Avenue, culminating with a 30-unit development replacing a seafood warehouse and the Fairmount 500 bar on the southeast corner of 15th and Fairmount. The City closed its largest homeless shelter early this year, which was located across the street from the Divine Lorraine, and Project Home is planning to build 55 units of affordable housing on the triangular lot at the intersection of 15th, Fairmount and Ridge.

For our photo essay on the building before it was stripped of interior architectural detail, click HERE. 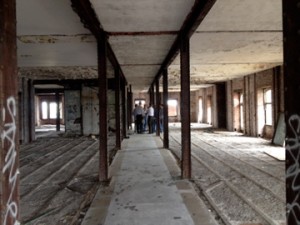 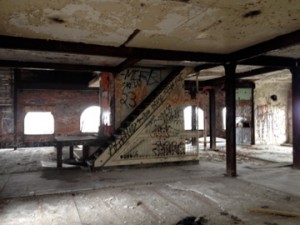 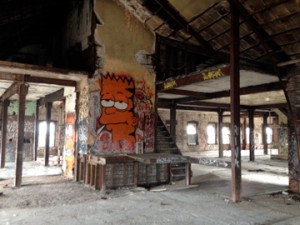 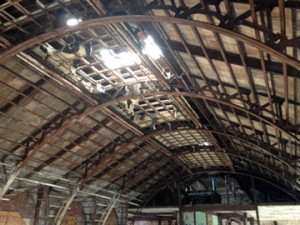