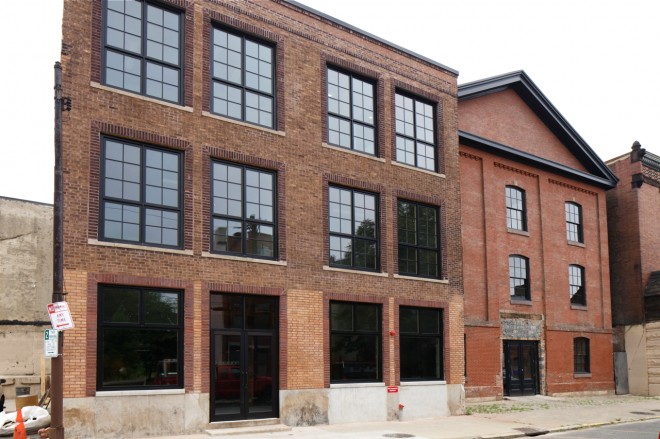 3rd Ward is rehabbing both buildings. The building at right was originally a church and later a box factory | Photo: Hidden City Daily

3rd Ward, the Brooklyn co-working space originally scheduled to open this summer in Kensington will now be slated for a “soft launch” in October. Read our earlier report on the project and its developer David Belt HERE.

“We’re a little bit behind in the construction schedule,” says Lauren Puglia, 3rd Ward marketing director, of the renovation of the former church and box manufacturer at Fourth and Thompson. The soft launch will reveal only half of the facility, with a grand opening sometime before December.

“We’re definitely for-profit,” Puglia says, explaining the 3rd Ward business model. But, she adds, the community will drive the evolution of the facility. This may make the Philadelphia 3rd Ward distinct from the New York version as it develops.

Initially, however, folks can expect a similar mix to the workshop spaces and classes offered in New York. One difference will be a new culinary space, which was made possible by the bigger venue, set to open in 2013.

There will also be a Philly-particular restaurant. However, despite a several inquiries, no restaurant partner has yet been chosen.

“We’re all very stoked about the Philly space,” Puglia adds. “We get to start from scratch and learn from all of our [previous] mistakes.”

3rd Ward will begin staffing in August for the upcoming opening in Philadelphia. To apply, email jobs@3rdward.com.