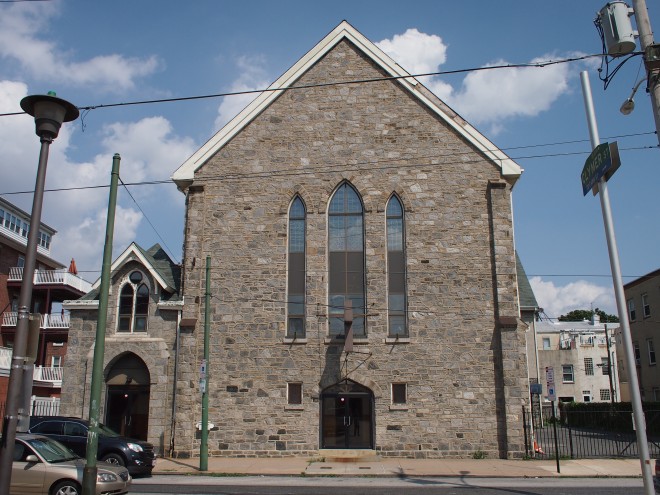 July is apparently Hawthorne month. Tomorrow at 6PM is the official grand opening of Hawthorne Community Park; yesterday, in his Shadow Knows column, GrojLart explored the history of the former Union School and Home, just off the park at Twelfth and Fitzwater. Now let me take you next door to Rising Sun Baptist Church, right on the park, a building that too is a lens on the city’s history–and a little of my own as well. It’s also a remarkable story of a prominent neighborhood building gutted by fire–and ultimately restored.

The All Saint’s Episcopal congregation had its beginning in 1827 as a Sunday School established in a house on Shippen Lane. By the 1840s, plans were made to construct a place of worship on a lot at 745 South 12th Street. The fieldstone edifice was constructed for All Saint’s in 1846. The church’s cornerstone–a copper box with a bible, a prayer book, and sundry papers and records–was laid at the northeast corner of the foundation on April 15, 1846, in the presence of about 1,000 people. Designed and built by J. & A Ferguson, the design was cruciform, with the nave and chancel 100 feet deep by 42 feet wide. The basement–the cause of much heartache 148 years later–was divided into four rooms used for the Sunday school and bible classes. 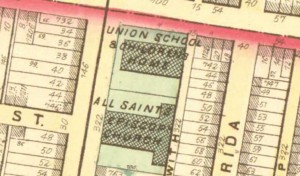 From the 1875 Hopkins Philadelphia Atlas. Note the Union School and Home next door.

With a roof but no ceiling and walls without plaster, the congregation began occupying the church on January 17, 1847. It was consecrated a year later. As the size of the lot was augmented, an enlargement was made in 1854 (the architect was John Notman).

As often happens in the history of religious buildings, the neighborhood changes and congregants move to greener pastures. This has occurred countless times in Old City, Society Hill, Northern Liberties, and Southwark, among other places. So often as immigrants took hold in these oldest areas of the city, well-off congregants moved to points north and west. 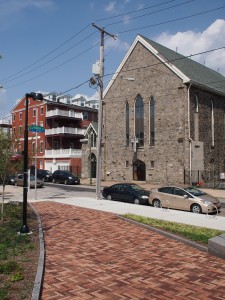 Eventually, the congregation moves and the trustees sell to a new group. This scenario transpired at All Saint’s at the start of the 20th century. Not only did the Episcopal congregation face a rising number of Italian Catholics in South Philadelphia, but it saw a general increase of immigrants of all sorts, among them Greeks.

Indeed, Twelfth and Fitzwater was near the center of the city’s Greek population (vestiges still remain near 11th and Christian). And so in 1908, All Saint’s sold the property for $35,000 to a Greek Orthodox congregation. All Saint’s then merged with Holy Spirit, a mission church that it had established at 12th and Snyder in 1890. Keeping the “All Saint’s” name, the two congregations united at a new building at 11th and Snyder. This church lasted until 1949 when it moved to Rhawnhurst in Northeast Philadelphia.

Meanwhile, the Greek Orthodox church was given the name “Evangelismos” (Church of the Annunciation). According to the current church’s website: “Many parishioners remember their young years at what they affectionately call “the Old Evangelismos,” a safe harbor for the Greek Orthodox immigrants and their offspring for over sixty years.” This is the church my father attended and where he sang as cantor.

After sixty some years, the same thing that happened to the All Saint’s congregation happened to Evangelismos: parishioners were moving out–in this case to Elkins Park. The church followed in 1963, to 504 Elkins Avenue (a few blocks from the church’s present location at 7921 Old York Road). On June 8, 1968, construction of the Hellenic Cultural Center began, followed by the new Church of the Annunciation itself. It opened for worship on November 19, 1972, and still stands proud as one of the sixteen or so houses of God along Old York Road. 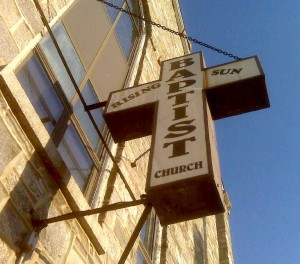 Rising Sun Baptist, founded in the 1920s at 3rd and Washington, purchased the old Evangelismos in 1967 for $65,000. Then, on January 28, 1994, the church caught fire. The blaze–caused by leaking exhaust gases from a clay heater flue–started in a basement crawl space. Investigators found separations as wide as an inch in several joints, permitting carbon monoxide and other gases to escape.

Firefighters were called and extinguished most of the fire after a half-hour or so in the basement. But without warning, an explosion of superheated gases occurred and flames came up behind the men. The gases ignited beams and flooring in the crawl space beneath the church’s kitchen. As the fire spread through voids and openings to the upper floors, a backdraft fire in the high plaster ceiling near the nave caused it to burst into flames.

What began as a routine basement fire turned into a 5-alarm disaster involving over a hundred firefighters. The ceiling and the floor collapsed, trapping two men. Defying the chief’s orders, a rescue crew of six men went in to locate the men, but they too almost became victims. The old church burned out of control. People were evacuated from neighboring buildings and the Red Cross set up a temporary shelter at a nearby school. Many cried at seeing the inferno.

Firefighters John Redmond and Vencent Acey were killed in the line of duty. It was the worst day for the Philadelphia Fire Department since the One Meridian Plaza fire in 1991. 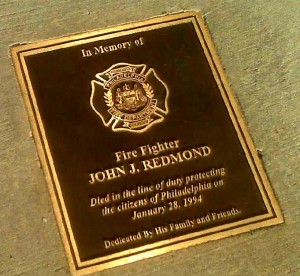 The 148 year old church was destroyed. Little survived other than the 24-inch-thick stone walls. It was in such bad shape that the city designated it “imminently dangerous” and the feeling was that it could not be rebuilt. In addition, since many older members of Rising Sun had moved to southwest and northwest Philadelphia in the 1990s, there was a question as to whether the congregation could recover.

Yet the chairman of the church board Andrew Timmons said that Rising Sun would be restored. And it was in 1996. From the ashes, the storied church was reconstructed and still stands today. A bronze plaque in the vestibule, dedicated to John Redmond and Vencent Acey, is a reminder of the terrible fire.

Today from the outside, Rising Sun appears almost as it did before the fire. But inside, the building received a new kitchen, pastor’s study, classrooms, heating and air conditioning systems. It has an elevator to the second floor sanctuary for handicap access—also designed for caskets. The $750,000 project was financed by an insurance pay-out and a $175,000 bank loan. The troublesome basement and crawl space were filled in.