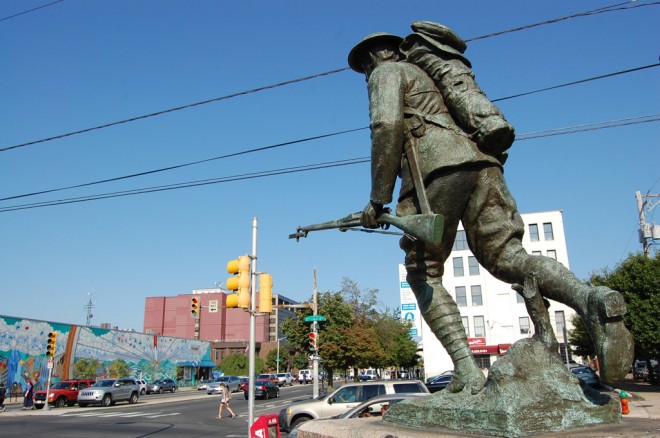 Looking as if he’s leading a charge out into traffic at the busy corner of 2nd & Spring Garden, this World War I doughboy is part of a memorial honoring fallen soldiers who hailed from the Philadelphia neighborhood once known as the Tenderloin.

Largely razed to make room for the Vine Street Expressway and its connector ramps, the Tenderloin was a hub of what was once known as “vice.” That is only part of its story, however. The Tenderloin was host to a complicated mix of uses, as authors Fredric M. Miller et al write in Still Philadelphia: A Photographic History, 1890-1940:

The red-light district, or tenderloin … ﬂourished in Philadelphia despite the city’s notorious blue laws and its strait-laced reputation. Philadelphia’s tenderloin district was small and unusual in not being exclusively devoted to illegal enterprise. Factories and warehouses shared the neighborhood with hotels and theaters, and many working people lived nearby. The area had long been tolerated and protected by politicians and the police. 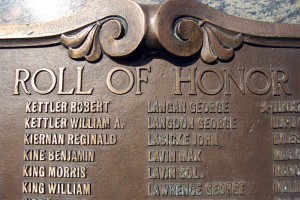 The Tenderloin doughboy wasn’t always located at this busy intersection. E. David Horwitz, assistant professor of history at the Community College of Philadelphia, points out that the monument once graced a pocket park that stretched from the east side of 5th Street through to York Avenue, between Willow and Noble Streets. All but erased from living memory, York Avenue was a diagonal street that pre-dated the city’s current grid layout of streets. The names inscribed on this memorial are virtually all that remain of the Tenderloin district.

For more from Hidden City on the Doughboy and the new park surrounding him, click here and here. 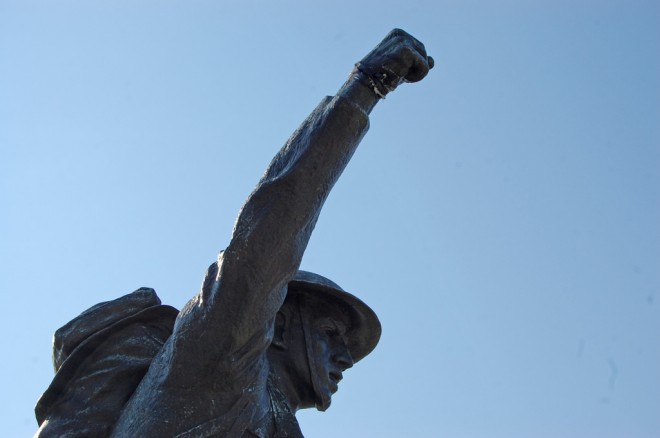