The Olympics Once Were Here. Sort Of. 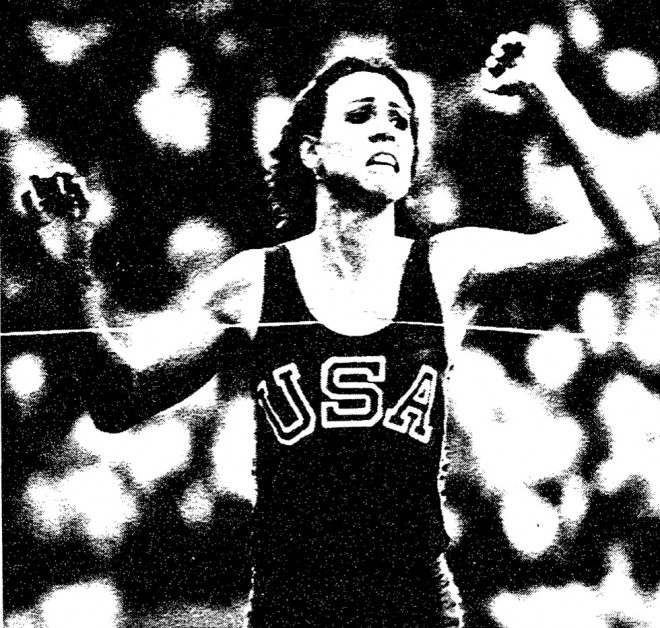 “Mary Decker crossing the finish line at Liberty Bell Classic with a U.S. record in the 1,500-meter event” | Photo: Keith Meyers, for The New York Times

Tonight, while one in seven will watch the Danny Boyle-directed opening ceremonies of the 30th Olympic games in Stratford, East London, perhaps a few will recall the Jimmy Carter-initiated “alternative Olympics” of 1980 held here in Philadelphia thirty two summers ago.

The 1980 Moscow games followed on the USSR’s desperate and brutal invasion of Afghanistan. President Carter’s subsequent call for an American-lead boycott was itself a desperate attempt at punitive diplomacy and it was met with criticism that it would be collaterally damaging for the athletes, a charge not unlike those against the NCAA in its punishment of the Penn State football program. 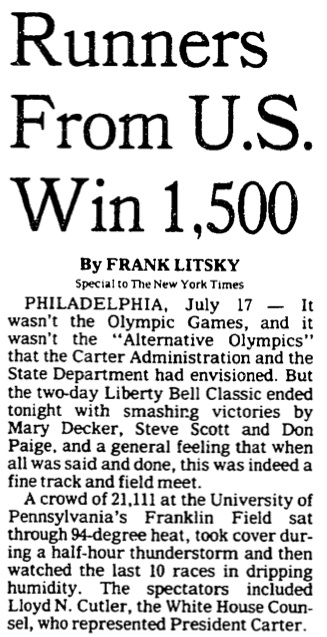 Carter promised an “alternative Olympics” for all allied nations joining in the boycott, first maneuvering towards a West African venue. Yet when that plan fell through, the Carter administration turned to Philadelphia, requesting the University of Pennsylvania to make Franklin Field available for a stripped down track and field meet–a seemingly perfunctory expression of anti-Sovietism.

An imitation of an imitation, the “Liberty Bell Classic” of July 16-17, 1980 failed to create any significant lasting impression on the American people, let alone here in Philadelphia. Most participants made the best of the impromptu boycott games. Harvey Glance, who had won gold in the ’76 games in Montréal, was forward looking. The disappointment “is history,” he said. “We can’t do anything about it. Let’s put on a good meet for the American public. Let’s forget about Moscow.”

Over 370 athletes from 30 nations converged upon West Philadelphia. Six world record holders were there. Some 25,000 (3,181 paid $1 for the opening day’s events; 21,111 paid $4-$10 for the second day) got to see “smashing victories by [Americans] Mary Decker, Steve Scott and Don Paige” of Villanova. Renaldo Nehemiah (of future San Francisco 49ers fame) “looked as good as ever,” said Sports Illustrated,  “in winning his race in 13.31, just .31 off his world record.”

The 94-degree heat was oppressive; the brown grass of the football field unattractive; the competition, provincial. Yet Villanova runner Don Paige, who won gold in the 800 meters, would have it no other way. Speaking to the Daily News two years ago in commemoration of the 30th anniversary of the boycotted summer games in Moscow, Paige maintained the cherished Olympic ideal.

“I still say maybe because Don Paige did not go to the Olympics, maybe I spared one life in Afghanistan. And if I did, I sleep really well at night because of that. It makes me feel good and proud.” 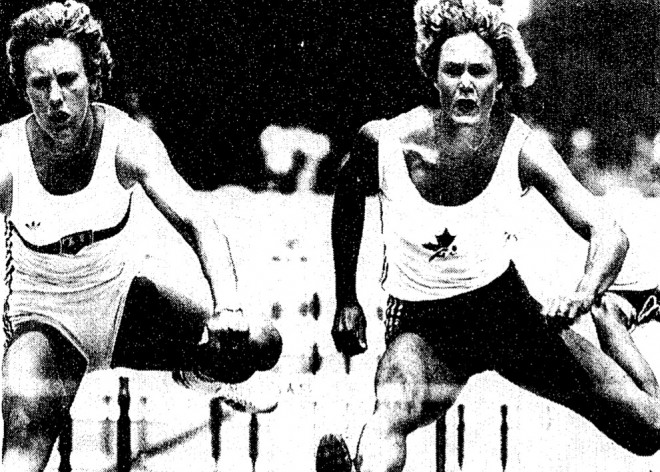