Inside This Manayunk Hardware Supply House? A Movie Palace 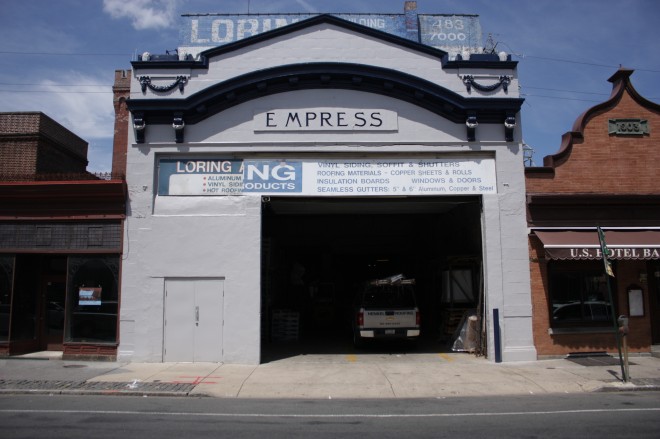 The exterior of the Loring Building Products warehouse, the former Empress Theater, on Main Street in Manayunk. | Photo: Philip Jablon

Earlier this year, Terry Loring pulled down some of the signage on the front of her family’s construction material warehouse on Main Street in Manayunk. Behind forty years’ worth of Loring Building Products signs she found the word “Empress” carved into the façade, along with subtle neoclassical details. She decided to highlight the name when she had the building repainted, in homage to the warehouse’s past as one of Philadelphia’s grandest neighborhood theaters.

The Empress opened in 1914 as a mixed-use vaudeville/motion picture theater that seated 1,500 people. At some point during its early years it was purchased by the prolific Stanley Company of America theater chain, founded by Philadelphia-born theater magnates Jules and Stanley Mastbaum. Stanley was the largest theater chain in the country during the Golden Age of motion pictures. In Philadelphia, the Stanley Co. either built or eventually purchased some of the most exquisite theaters in town, including the Mastbaum, Stanton, and the eponymous Stanley Theater. Eventually the company was bought out by Warner Bros. and became Stanley-Warner Theaters. 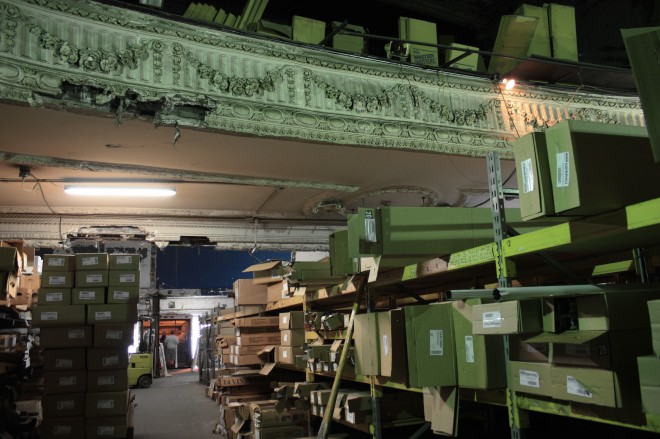 By all accounts, the Empress was the premiere entertainment venue of Manayunk in its heyday. Employees of Loring Building Products claimed that W.C. Fields and the Three Stooges performed skits on the Empress’s stage during its vaudevillian years.

As live shows fell out of favor and the film medium grew, the Empress was leased to the Riviera Amusement Co., and served exclusively as a movie theater under the company moniker The Riviera Theater. The number of seats declined to 700. In 1941, Stanley Co. sold the building to Riviera Amusements for $64,900. By then, the theater had lost much of its former shine. 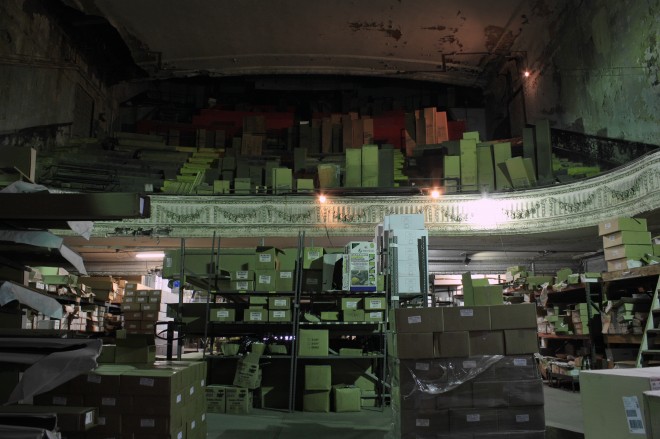 “For a while it became what was known as a ‘scratch’ theater,” said current owner Terry Loring, the daughter of the Loring Building Products founder. “Movie-goers would come out scratching themselves from flea bites.”

The decline of the Empress/Riviera over the next two decades mirrored a nationwide trend: all across the country, once-opulent movie palaces struggled against a waning manufacturing sector and the growing popularity of television as a leisure-time alternative to the silver screen. Theaters unable to afford expensive technology upgrades–such as Cinerama or Cinemascope systems–saw their up-market clientele switch to theaters that could. The phenomenon is not unlike what’s happening to theaters today with the rise of digital projection and 3D movie technology.

The Riviera screened its last film in 1962.

By the mid-1960’s the aging theater was serving as a live music venue. This is where local legend gets tangled with fact. As the story goes, a man dropped one too many hits of acid during a Jimi Hendrix concert and decided he could fly. He allegedly nosedived off the Riviera balcony and died on impact. 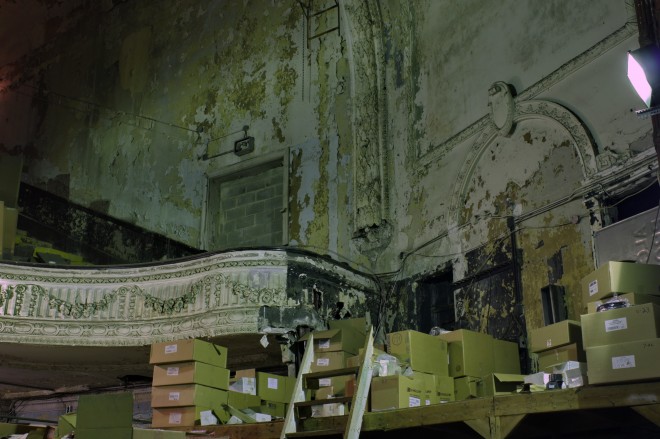 Rumors of drug dealing at the venue led acting police commissioner Frank L. Rizzo to order the club to cease and desist. One can almost imagine Police Commissioner Rizzo arriving at the theater, night-stick in hand, to personally shut it down. This was the end of the Empress/Riviera’s life as a Manayunk hotspot.

All has been quiet at the Empress since Loring Building Products picked up the deed in the late 1960s. For more than 40 years, the company has used the building as an office, warehouse and distribution center. 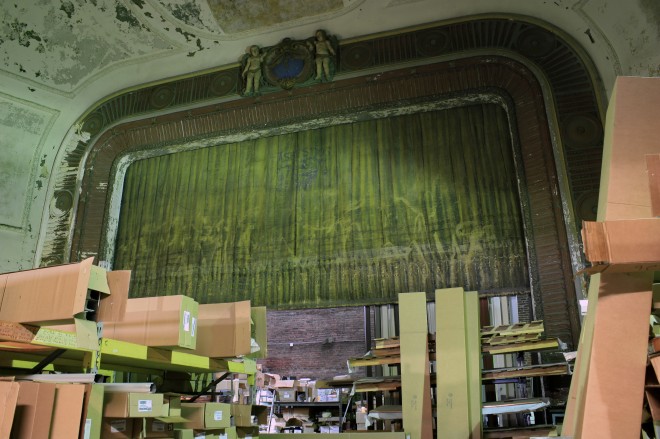 Architectural remnants of the building’s past serve as a backdrop to current operations. The grand auditorium, once host to captive (if not itchy or stoned) crowds, now holds rows and stacks of construction materials. Above, molded plaster garlands adorn the walls and face of the balcony. An ornate proscenium, highlighted by a cherub-flanked cartouche at its peak, frames what was once a stage. Just below that, a mustard-yellow pleated curtain with the insalubrious admission of ‘ASBESTOS’–an early precaution against fires–dangles half-raised. Toward the foyer, evidence of the psychedelic past can be discerned in the form of a tie-dyed paint job near the ladies room. 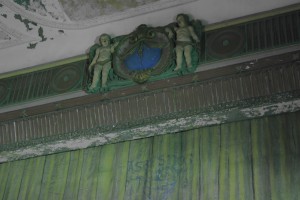 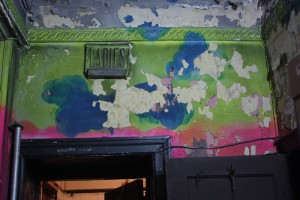 At the height of the real estate market in 2006-07, developers were eyeing the old theater with thoughts of restoration in mind. But those multimillion dollar plans fizzled when the bubble burst in 2008.

Thanks to the good stewardship of the Loring family, the former-Empress Theater endures, an elegant part of Manyunk history.