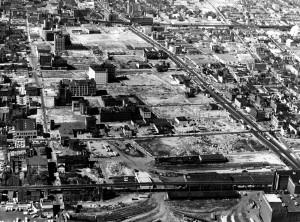 The second City Museum (and the Betz Brewery) in the top left of this scene of destruction. It shows the scope of the Callowhill East Redevelopment Project, ca. 1969. About thirty percent of Northern Liberties was wiped out in a failed urban renewal effort. Temple University Urban Archives.