The Cheapest Place Of Entertainment In The World 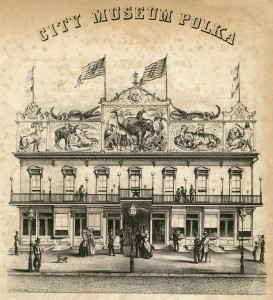 The “City Museum Polka” (1854). This is the cover of sheet music written to commemorate the opening of the City Museum on September 12, 1854. Library Company of Philadelphia.

The north side of Callowhill Street on the west end of the block between Fourth and Fifth Streets: a lonely setting where today it seems nothing of import or interest ever happened.

The present day can be deceiving, for this spot has been a church, natural history museum, German language theater (one of the last of its kind in the nation), and one of the largest and most popular breweries in the country.

Built in 1823, the Second Universal Church stood in the center of the lot at 417 Callowhill Street, twenty feet back from the street. The building was sixty feet in front by eighty feet deep, with a portico and Doric facade of imitation of marble. Its ground floor was divided into four aisles and four tiers of pews, while the outward aisles adjoined the walls. A burial ground surrounded the house of worship. A sugar refinery operated from the rear of the property, facing Willow Street.

After about thirty years, the Second Universal Church sold the property and bought a church on Eighth Street above Noble Street. The bodies in the old churchyard were transferred to another cemetery. 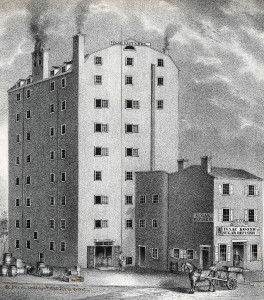 The church was then converted into the City Museum, which debuted on September 12, 1854. In imitation of the long-gone Peale Museum, the first natural history museum in the nation, the City Museum combined art, natural history, and education. It had a fine group of paintings and statues from European and American artists as well as a large collection of Native American artifacts.

The City Museum also boasted a second floor lecture room used for dramatic performances. This theater was actually the chief reason for the museum, as its goal was “to blend moral amusement with scientific instruction.” Even so, the museum became a rowdy spot featuring dancers, jugglers, and magicians. Naturally, a lager beer garden supplanted the City Museum in 1860 and its name changed to the Melodeon, which advertised itself as “The Cheapest Place of Entertainment in the World.” Later renamed the Atlantic Garden, the building was consumed by a spectacular fire on November 25, 1868.

A larger theater was immediately built on the ruins. Renamed Concordia Hall and then Concordia Theater, it had a central gas chandelier whose ventilator projected through the roof and was crowned with a tiny star. The new facade had five high arched windows set at the second floor level. It became a significant neighborhood amusement venue, offering serious drama and variety shows, sometimes in English but often in the native tongue of the surrounding German community of Northern Liberties. 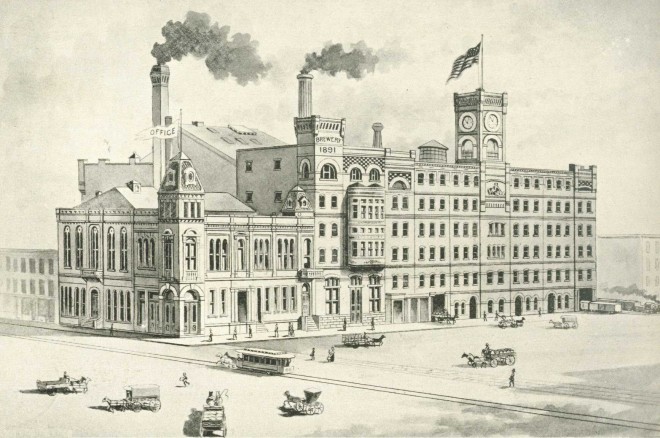 As the neighborhood became increasingly industrial, it became part of the city’s skid row. The Concordia declined and went through several other name changes in the late 1880s. Finally, in 1890, the old theater was incorporated into the John F. Betz & Sons Brewery and was converted to house bottling machinery. It remained this way well into the 20th century. 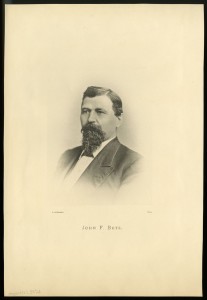 John F. Betz, owner of the Betz Brewery and scores of other enterprises. Library Company of Philadelphia.

German-born John Betz set out as an apprentice brewer in New York and came to Philadelphia in 1867, where he began working at the William Gaul Brewery at New Market and Callowhill Streets. He came to own the sugar refinery facing Willow Street between Fourth and Fifth. Betz transformed it by 1880 into one of the largest and best known breweries in the country. This six-story Victorian pile was a block wide and even had a four-sided clock tower.

Contemporaries claimed that John Betz’s beer rivaled all Bavarian imports and it made him rich. The Betz Brewery remained in business until 1939, when it was purchased by the Liebman Furniture Company.

The stately brewery was later demolished, but the old Concordia theater escaped demolition to became a warehouse. The storied building survived until the late 1960s when the entire Callowhill neighborhood was leveled in the Callowhill East Redevelopment Project. The federally-funded scheme encompassed a rectangular zone from Second to Ninth Streets between Callowhill and Spring Garden Streets. 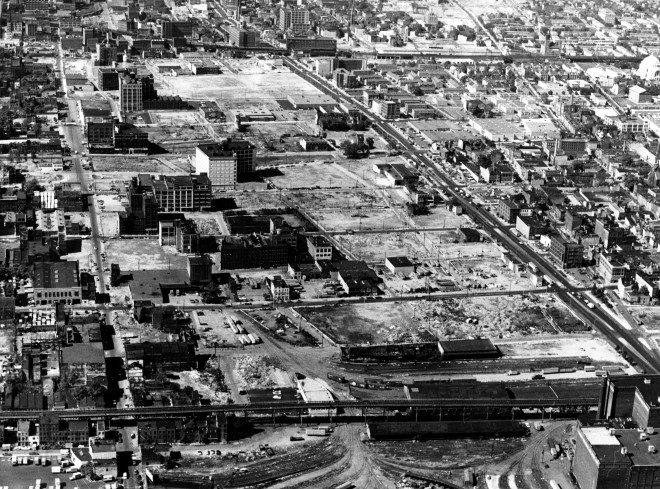 Site of the second City Museum (and the Betz Brewery) is in the top left of this scene of destruction. It shows the scope of the Callowhill East Redevelopment Project, ca. 1969. About thirty percent of Northern Liberties was wiped out in a failed urban renewal effort. Temple University Urban Archives.

There was a brief flurry of protest, but this was not taken seriously. Some twenty city blocks were leveled in this monstrous undertaking, and several cross-streets were removed from the Philadelphia street grid. Hundreds of eighteenth and nineteenth century dwellings, stores and workshops were torn down, and countless residents living in the Callowhill neighborhood were displaced, as were many businesses.

The site of the City Museum today

The district is now an urban wasteland of parking lots, faceless warehouses, and minor low-rise industrial buildings with no architectural appeal–or windows, for that matter. The desolate no-man’s land cuts off Old City to the south and Northern Liberties to the north, forever separating what had been, since the 17th century a natural link between the two vital areas of the city. The Vine Street Expressway (directly across Callowhill Street) did not help matters, as it removed six city blocks all the way from the Second to Eighth between Vine and Callowhill Streets.