In Love With A Ship And Its Architect 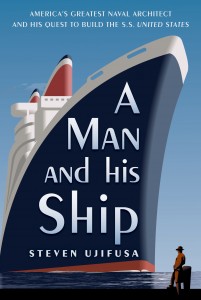 Editor’s note: Steven Ujifusa is the author of the new history A Man and His Ship: America’s Greatest Naval Architect and his Quest to Build the SS United States and a past Hidden City contributor. He’ll be appearing tonight, Thurs., July 19 at 6PM at the Independence Seaport Museum.

Meredith Broussard: Your new book is about the guy who built the US United States, the rusting hulk of a cruise ship docked near the IKEA on Columbus Boulevard. How did you get the idea for the story?
Steven Ujifusa: I first heard about the SS United States as a child. My grandparents both traveled on the ship in the 1950s, when she was the fastest and most popular liner on the Atlantic. It was my grandmother who first got me interested in ships and the sea. In fact, she was with me in the car when I saw the ship for the first time back in 1996, soon after she arrived in Philadelphia and we were driving over the Walt Whitman Bridge. About 5 years ago, I started to learned more about William Francis Gibbs, and I realized that this native Philadelphian was one of the great builders in American history, on par with Frank Lloyd Wright and John A. Roebling. Colorful, eccentric, and largely-self taught, Gibbs had one mission in life: to build the safest, fastest, most beautiful ocean liner in the world. I believe this ship is the equivalent of the Brooklyn Bridge and the now-lost Pennsylvania Station, and the inspirational story of her driven designer needed to be told.

MB: What led Gibbs to create the ship?
SU: Gibbs was determined to built an American passenger liner that could compete with the great ships of England, France, Germany, and Italy. Above all, he wanted is liner to outrun them. During the first half of the twentieth century, European governments heavily subsidized their steamship companies to build ocean liners that could make the fastest crossing of the Atlantic. They were also floating national showcases of engineering, art, and design. It was not until after World War II, after nearly forty years of scheming, was Gibbs (working in concert with the shipping company United States Lines) able to get a subsidy out of the federal government to build the ship that became the SS United States. Should another world war break out, the ship could be quickly converted from a 2,000 passenger luxury liner into a 14,000 soldier troopship.

Gibbs was an engineer with the soul of an artist, and saw ships as floating symphonies of steel. And like fellow self-trained American designer Frank Lloyd Wright, he was a great lover of beauty. 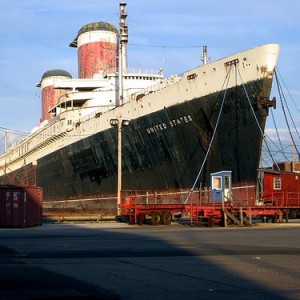 MB: What discovery surprised you most during your research?
SU: In 1944, Gibbs was investigated by the House Naval Affairs Committee for war profiteering. During World War II, his firm was responsible for nearly 70% of all naval vessels constructed by the government. This included destroyers, cruisers, Liberty ships, and the Normandy landing craft. His once-struggling naval architecture prospered, but some politicians felt he was bilking the government. A trained attorney and meticulous businessman, Gibbs ably defended himself against the charges, showed the committee his books, and walked away a vindicated war hero. If found guilty of war profiteering, he probably would have never built the SS United States at war’s end.

MB: What’s one thing about the ship that will stand out visually for a passerby?
SU: Her enormous red, white, and blue funnels, the largest smokestacks ever placed on a liner. Because of these large stacks, she could be identified miles away. They are now faded and peeling, but as sculptural forms are still beautiful. Gibbs personally oversaw their design. Also note how low and sleek the United States is compared to today’s bulky cruise ships. She was built for looks as well as strength. In the 1950s, passengers did not demand private balconies.

MB: Why does the story of the ship matter now?
SU: The SS United States represents a story of national achievement, one as great as the Brooklyn Bridge was in the late 19th century. The amount of passion and effort that went into her design and construction is simply staggering. In times such as these, when so many are lamenting America’s uncertain place in the world, the SS United States is a reminder of a time when our nation built things, great things. Imagine something the size of the Chrysler Building turned on its side, and moving through the ocean at over 40 miles per hour. The story of the SS United States is also one of someone pursuing a beautiful dream, and achieving it after overcoming great obstacles such as shyness, family bankruptcy, and a long line of naysayers. 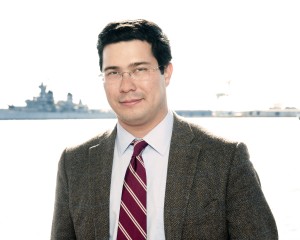 MB: What has happened to the ship since it was docked (more or less permanently) on the Philadelphia waterfront in 1996? I’ve heard it’s a saga.
SU: After the developer who brought her to Philadelphia in 1996 died, the ship was purchased by Norwegian Cruise Line in 2004 with the intent of returning her to cruise service. Yet in 2010 Norwegian lost interest in the project and offered her for sale, this time for scrap. The day before scrapping bids were due, philanthropist H.F. “Gerry” Lenfest offered the SS United States Conservancy–a national nonprofit based in Washington, D.C.–$5.8 million to purchase the ship and maintain her for 20 months. The deal was finalized in February 2011, and the SS United States Conservancy became the owners of the ship, charged with brokering a real estate deal that would redevelop the ship as a stationary attraction in a major port city, as well as raising money from the general public to preserve this irreplaceable treasure for future generations. It’s as if a guardian angel intervened just as the wrecking crew arrived at New York’s Pennsylvania Station half-a-century ago.

MB: What’s in store for the ship’s immediate future?
SU: The Conservancy has just launched a new fundraising initiative coinciding with the 60th anniversary of the ship’s maiden voyage, one that blends public history, micro-investing, and historic preservation. Www.savetheunitedstates.org allows people to purchase sections of a virtual ship and share photographs, stories, and film footage with the American public. This initiative will raise money for the ship’s external restoration. At the same time, the Conservancy is working to secure partnerships with developers on the East Coast. If a deal is not secured by November of this year, the Conservancy will be forced to sell the SS United States to a Gulf Coast scrapper, and she will be ripped to pieces and melted down.