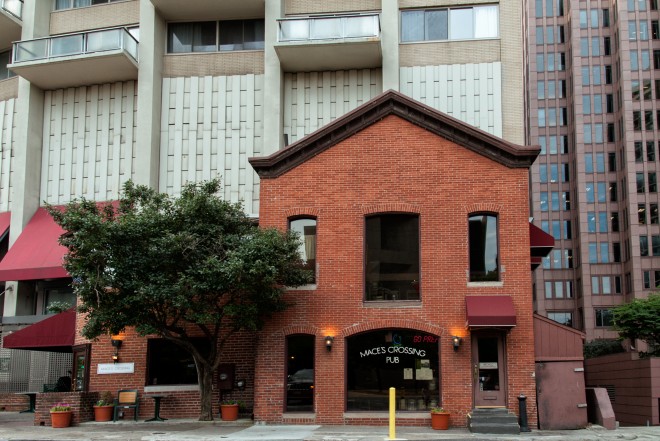 Here’s a little bitty building–a former carriage house–that has outlived everything else nearby, enduring despite the march of skyscrapers that has consumed everything around it. Saved from demolition by nothing other than random chance, we might call it an immortal pile of bricks.

The story of this carriage house begins almost three centuries ago–and in another part of town. Around that time, William Penn’s foolish descendents started leasing property on the city’s five open squares. In 1741, they subdivided Northeast (Franklin) Square–what the Penns called “Race Street Lot”–into leaseable spaces. One of them was rented right away by the German Reformed Church for use as a burial ground. In 1763, the church would purchase the lot for 189 pounds. 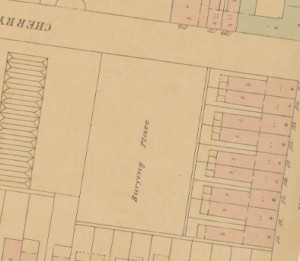 In 1795, after five decades in use as a graveyard, Philadelphia’s government wanted its square back. They offered $30,000 for the lot, but the church refused. The matter was brought to the civil courts in 1801. The city would claim that the fenced-off area, covered in weeds, vines, and an overabundance of gravestones, was a public nuisance. The courts declared that the Penns’ sale of the lot was invalid in the first place. In exchange for ripping off the church, the city offered $5,000 and a new plot of land, the area bounded by Race, Cherry, Schuylkill Fifth (18th) and Sixth (17th) Streets.

This new space was much larger than the Franklin Square graveyard. The German Reformed Church, after moving all the bodies and gravestones in, didn’t even come close to filling all the space. Even after three more decades, they still had plenty of room. The church sold three sides of the property to private developers who would build large rowhouses along its perimeter around 1840.

At the end of the 1860s, the graveyard finally ran out of room. The German Reform Church was forced to create a space for itself at the new West Laurel Hill Cemetery and move all the bodies and grave markers there, where they still reside today. The space left over in the 1700 block of Cherry Street was then split up into small lots. In 1870, the rowhouses on the eastern side each got an 18′ x 49′ extension to their backyards. 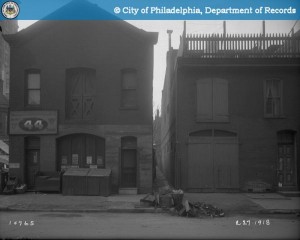 The Carriage House in 1918 | Source: PhillyHistory.org, a project of the Philadelphia Department of Records.

The northeastern-most of these houses was 126 North 17th Street, standing at the southwest corner of 17th and Cherry. It was the last of the long row of identical homes that once backed-up to the graveyard and would now have an extended rear space. Though its not exactly clear when it happened, the owners of 126 North 17th decided to build a carriage house on the new rear space of their property that would face Cherry Street. This, then, is the birth of what today we call Mace’s Crossing.

Half a century later, the new Fairmount Park Parkway (Benjamin Franklin Parkway) was planned to cross straight through 17th and Cherry Streets. One of the goals for the Parkway was to acquire all the “undesirable” properties in and around the new boulevard’s path and re-sell the ones that ended up adjacent to the road to developers in order to help pay for the project. The result is that the primordial version of the Parkway would be lined with the diagonally-cut remains of buildings that got in its way.

In 1916, after 126 North 17th and a few of its neighbors became soon-to-be-destroyed city property, the carriage house became its own address: 1714 Cherry Street. The Tay-Miller Chemical Manufacturing Company moved in, producing snake oils and a car cleaner called “Hand-i-Wash.” The Parkway’s trail of destruction reached 17th and Cherry in September, 1917 and took until the start of 1918 to break through due to the bulkiness of the Medico-Chirurgical Hospital Complex. 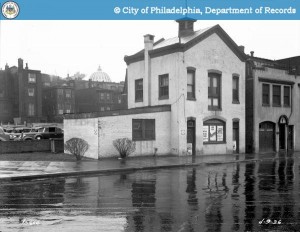 1936 | Source: PhillyHistory.org, a project of the Philadelphia Department of Records

Later that year, Tay-Miller’s Hand-i-Wash product became a big hit, causing the company to move out of the small carriage house to a much bigger facility at 20th and Market. The little building and the remaining row of homes nearby were then acquired in 1920 by the Sun Oil Company (Sunoco), who planned to build a 12-story Parkway-facing headquarters designed by none other than Horace Trumbauer. The project went into a familiar development limbo that lasted for most of the 1920s. Sun Oil eventually decided to build their new HQ on Walnut Street instead. The land they cleared for the Parkway HQ became a surface parking lot; the carriage house would be painted white, get a small addition, and become a refreshment stand.

For the next thirty years, the carriage house would be one of the only structures on the south side of the Parkway between 17th and 19th Streets and one of only three small buildings that survived in the Parkway’s destructive wake–and the only one that directly faces it. It had the Sun Oil-created surface lot to its east and the Municipal Court’s parking lot to its west. The building would go through a myriad of uses during this time with long periods of abandonment in between. The surface lots would finally get tall buildings in 1964 and 1968, leaving the little carriage house in their shadows. 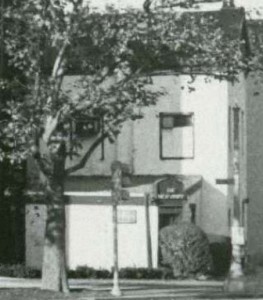 Side view, 1964 | Source: Athenaeum of Phiadelphia

In November 1975, brothers Bernard, James, and Robert Thompson purchased the property for $70,000 and about a year later opened their restaurant, Mace’s Crossing, after overcoming some issues with their liquor license. The pub has occupied the little building ever since.