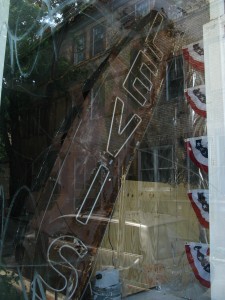 Determining who invented the hot dog is almost as difficult as determining who invented the hoagie. One story says the hot dog was created by Thomas Francis Xavier Morris, a Caribbean immigrant who served hot dogs in Paterson, NJ as early as 1892. Still another tale says the modern hot dog was inspired by a cartoon of a dachshund in a roll that was drawn by New York Evening Journal cartoonist Tad Dorgan around 1901. My favorite story says that the sausage-on-a-bun concept was invented by Abe Levis and Anna Solo Levis, who opened a little sandwich shop on South Street in 1895.

I like the idea that hot dogs might have originated in Philly. Add that to Philly’s solid credentials as Ground Zero for the invention of ice cream (popularized by another Caribbean immigrant, I might add), and it means our city has convincingly influenced America’s taste buds.

For most of the 20th century, South Street’s Jewishness was announced by the giant hot dog-shaped neon sign above the Old Original Levis Hot Dogs and Sandwiches shop. The Levis brand has been revived in an Abington store owned by Elliott Hirsh, who bought the original shop in 1990). The historic sign will be re-lit inside the South Street Magic Shop at 517 S. 4th Street tonight at 6 PM in honor of National Hot Dog Month. 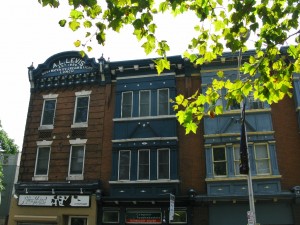 Toast the relighting with a bottle of Champ Cherry soda, a Levis original, or look for one of the other hot dog specials at local businesses this week. We’re planning to check out local artist Hawk Krall’s hot dog art on the walls at Hot Diggity. Other events are listed below. For more information, see the South Street Headhouse District Facebook page. 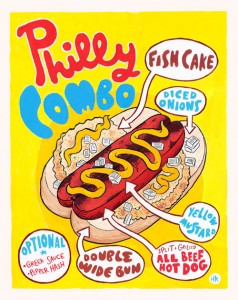 The Philly Combo, said to have originated at Old Original Levis Hot Dogs, is available at Hot Diggity, which has taken up the South Street hot dog mantle | Image: Hawk Krall.

(Editor’s note: Thank you, South Street Headhouse Square District, for alerting us to this national occasion—I will take it as an excuse to eat hot dogs all month long.)