Lost Goldmine Of The Wissahickon

In a previous article, I wrote about Johanas Kelpius, the merry monk who lived as a hermit in a cave by the Wissahickon. But there is another set of caves on the Wissahickon that few have heard of, and fewer still have entered. In the steep hills of Wissahickon Park, Gorgas Creek tumbles through a thickly-wooded valley on its way to join Wissahickon Creek. Near the intersection of these two creeks, a 20 foot rock outcrop thrusts itself off the hillside like the prow of a stone ship. At its foot, a dark, low tunnel reaches back twenty feet into the rock. Further downstream, a small hole in the hillside blows cold air, hinting at still larger spaces underground.

Almost nothing about the caves is known for certain. They remain shrouded in legend, purported to be the hiding place of robbers, Indians, and patriots. What we do know is that the caves are man-made, excavated with hand-powered rock drills and black powder by the Roxborough Mining Company in 1763-1764, which means they are among the oldest mines in North America. The company, whose goal was to uncover “ores and minerals,” consisted of just seven men, several of them were German immigrants from Germantown, apparently under the leadership of Barnard Gratz. Today the rock contains nothing of value, so it is puzzling why they would have dug there at all. 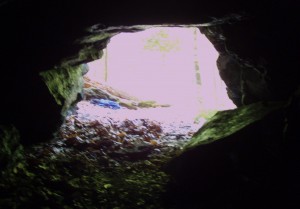 Looking out from inside the mine. | Photo: John Vidumsky

Local legend says that the Roxborough miners were looking for gold and were led to dig at this spot by a dowsing rod. This is plausible, but can’t be confirmed. Dowsing is a pseudo-scientific way of finding precious metals underground with a forked stick. We know that the immigrants of Germantown believed strongly in the power of dowsing and would often dig for treasure where the hazel stick pointed. Whatever they were searching for, legend says the miners found nothing and the mines were abandoned by 1764 (Another legend says that during the Revolutionary War large amounts of grain were hidden there from pillaging Hessian mercenaries.)

The caves were rediscovered in 1854 by a young local historian named Horatio Gates Jones. One of the entrances had become silted up, and had to be dug out before Jones could crawl inside. He recounts that this tunnel forks like a “Y” and goes back 30-40 feet. Shortly after, the hole largely filled up again with dirt, as it remains today.

The other tunnel however is still open, and shows evidence of occasional habitation by a modern-day Kelpius. There is no gold to be found, but this man seems to have found riches here of another kind. He has a guestbook for his cave, which reads in part, “Please love this space as God provided, read the Good Book and see that the earth will be renewed. This is Paradise!…Please respect this beautiful home!”

Author’s Note: special thanks to The Roxborough, Manayunk and Wissahickon Historical Society, who helped with research for this article. 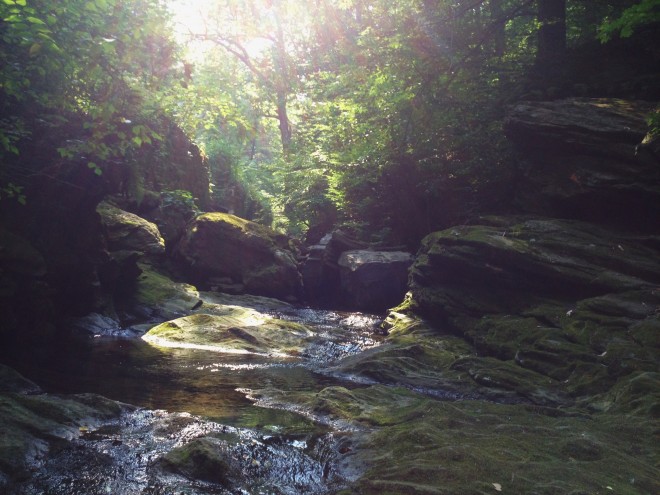