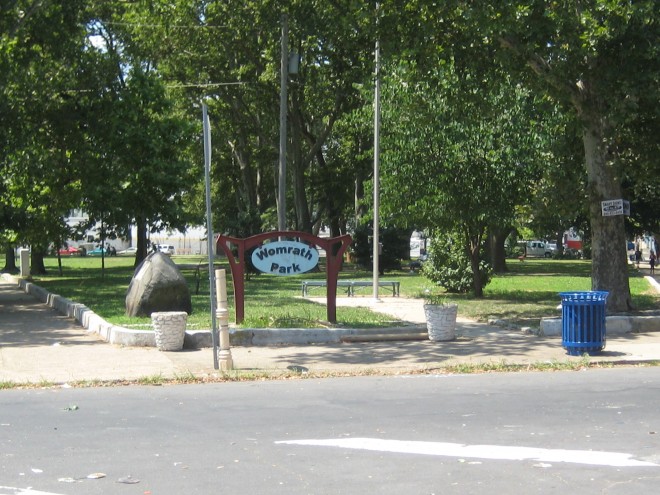 Ride the Frankford El to the end of the line at Frankford, and between the Church and Margaret-Orthodox stops you will pass over Womrath Park, a triangular parcel of green space at the intersection of Frankford and Kensington Avenues. According to local lore, Thomas Jefferson read the Declaration of Independence on this site before it was read to the public at large. The Founding Fathers also allegedly dined at the park site on July 4th, 1776. These stories were passed down for generations before appearing in print in the late nineteenth century and have been written about many times since. Could they be true? Maybe, maybe not.

What is now Womrath Park was in the 1770s part of a handsome Frankford estate that was the summer home of Henry Drinker, a prominent Philadelphia Quaker businessman. In addition to the mansion house, the property included a summer house, and it was in this summer house that the events of July 1776 purportedly occurred. Henry Drinker’s wife Elizabeth is notable for having kept a diary from 1758 to 1807 that is considered one of the great diaries of eighteenth-century America. In it she records everything from mundane family matters to momentous events surrounding the American Revolution. Unfortunately, there is nothing in her diary about any of the Founding Fathers being at her Frankford estate in July 1776, nor is there anything in the writings of the Founding Fathers themselves to indicate that they were in Frankford in this period.

And yet, there is some evidence to indicate the stories may be true. In 1792, Henry Drinker sold the property to Enoch Edwards, a leading patriot who was a close friend of Thomas Jefferson and who had served as attending physician to George Washington during the Revolutionary War. Edwards’s niece, Fanny Saltar, lived a few miles away at Magnolia, an estate along the Delaware River in what is now Tacony. She visited Edwards and his wife often in Frankford. In a letter in later years in which she reminisced about earlier days, she writes the following:

After my uncle’s return, he purchased a place in Frankford of Mr. Drinker … One day when Mr. Jefferson was on a visit to my uncle, they walked up to this summer-house. He looked round and said: This is the spot on which the signers of the Declaration of Independence dined the day they signed the Declaration. 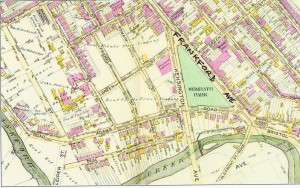 Womrath Park, as shown in 1894 Bromley Atlas of Philadelphia

Historical researcher Joe Menkevich, who has studied Frankford history extensively, has determined that this reminiscence by Jefferson probably occurred in 1793. He also notes that the story of the Founding Fathers in Frankford had been part of the local lore for many years before Fanny Saltar’s account of it was published in 1916. Menkevich’s research also suggests that it is very likely that some of the Founding Fathers dined in Frankford on July 2nd or possibly the 4th and that they were in Frankford in this period arranging business deals on New Jersey pig iron and Frankford gun powder. Henry Drinker was part-owner of a New Jersey iron forge, and Frankford had the only gun powder mill in the colonies at that time.

So perhaps there is some truth to the stories after all.