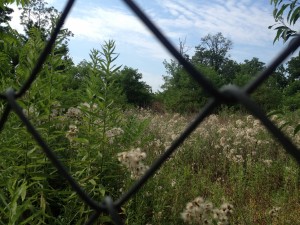 On Monday evening, Jenny French joined a group of ten other people in the basement of the Germantown Mennonite Church to discuss a new intentional community now in the planning stages in Mt. Airy, Wissahickon Village Cohousing. “I don’t like living alone!” said French, a recent widow and the mother of a son who’s left for college. She feels alienated, and being alone in her house exacerbates her loneliness.

After visiting a community where residents shared a recreation center that included a pool and common rooms, French decided it was time to seek other options. Like others at the meeting, French was drawn by her interest in two of the main co-housing principals: shared space and a friendly close-knit community.

The meeting was headed by Libby Harman and Janet Boys, both long-term residents of Mt Airy and organizers of the co-housing group. While there is no central leader, the group was initiated by the passion and organization of Lynn Iser, a community coordinator who was determined to build co-housing in Philadelphia. Wissahickon Village Cohousing will be the first development of its kind in the city (and possibly the most urban in the U.S.). Other similar groups are forming in Germantown and University City.

Meetings such as this one are held on a routine basis to inform and recruit members. Investments gathered from membership fees (Associate Member for $250 or Full Member for $1,000) go toward the estimated 10% to 20% needed to break ground for development. The group is in negotiations with Iron Stone, a private equity investment firm, to lead the development. This will be Iron Stone’s first co-housing development. 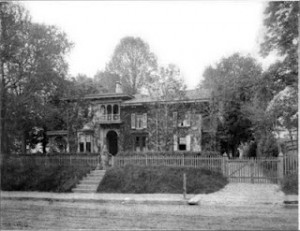 The site is located on 7048 Germantown Avenue, previously occupied by the Garret-Dunn House before it was destroyed in a fire caused by lightning in 2009 (read more about the fire HERE).  Harman and Boys see this freak accident as a mixed blessing:  the building was on the National and Philadelphia Registers of Historic Places and, though neglected, couldn’t have been incorporated into the village.

The area planned for development is 1.5 acres and lies adjacent to an additional acre of open green space overrun by weeds and unkempt trees. While the green space land is owned by the neighboring Acme supermarket and cannot be built on (per an agreement formed between Acme and the community), it creates a buffer between the co-housing development and the surrounding residences.

At the beginning of the meeting, Boys introduced the 1970s European roots of the co-housing concept. “It started in Denmark as a daycare center,” she explained. An American couple saw the Denmark daycare and brought the idea back home to the states (read about Denmark’s first cohousing community HERE). In the 25 years since the first co-housing structure in the U.S., over 120 have been formalized in North America (find a list of finished and developing communities HERE). 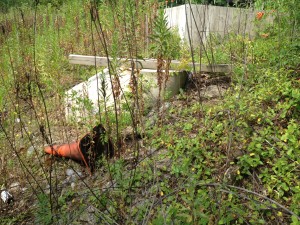 Both at home and abroad, cohousing is defined by a few common principles. It is an intentionally designed living situation where housing or apartment units are situated so that families interact. Common design includes pedestrian paths that weave through the development, a common house which can include a large communal kitchen, dining room, and other shared space. Resources such as lawn mowers, cleaning supplies, and laundry rooms are also communal. Parking lots situated outside the perimeter compel more neighborly interaction.

Cohousing also incorporates a walkable, less car-dependent community. The planned site on Germantown Ave has nearby amenities such as Lovett Library, the Chestnut Hill East and Chestnut Hill West train lines, Acme, Weaver’s Way Co-op, several gyms, restaurants, an electric bicycle shop, and at least one bank. The group is considering a Philly Carshare site in the co-housing parking lot.

Co-housing groups, including Wissahickon Village, generally rely on two guidebooks: The Cohousing Handbook: Building a Place for Community and Creating Cohousing: Building Sustainable Communities. Each development has its own particular ideological vision, however. Wissahickon Village focuses on two important goals: to create a diverse demographic of families and to sustain multigenerational residents. So far, members include five singles, two adults with children, and three couples. The members are straight, queer, young and old.

Because co-housing is designed to meet the community’s needs, units will vary in size including studios, two bedroom apartments, and three to four bedroom townhouses. People can even choose to buy and create rentals. Boys estimates units will cost anywhere between $170K to $400K and will range between 850 to 2,000 sq feet in size. While the space and common house will be cooperatively shared, used, and maintained by the cohousing group, the units themselves will be owned outright by individuals.

“There’s an intention to be neighborly,” Harman explains. With structured community comes safety and independence. For example, Harman adds, you can rely on your neighbors to watch your children or run to the pharmacy when you’re sick.  This type of living situation is attractive to those who want to “age in place and fight the isolation that young families face in terms of raising kids, that couples may have as kids move out, or the [loneliness] that a widowed person [faces]”.

According to Harman, negotiations could be finalized by this fall and breaking ground could start this winter. If everything runs according to schedule, members could move in 1.5 years, but nothing is certain before negotiations are complete, partnerships are formed, and more members are recruited.