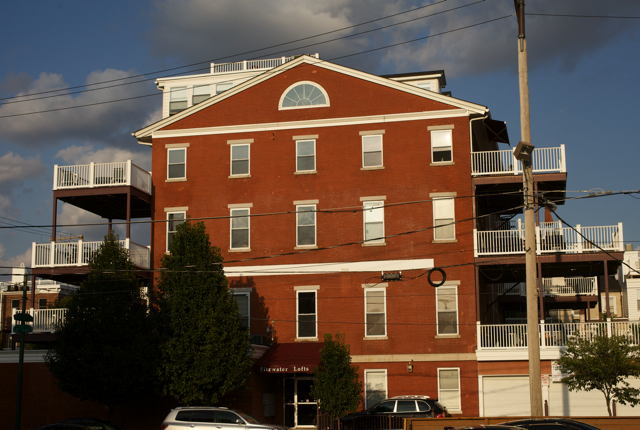 Balconies…balconies everywhere! Under all that contemporary exterior embellishment lies another survivor of the 19th century, a 158 year-old building with an eccentric history of social reform, manufacturing, and retail before it was converted to condominiums in 2006. This stolid piece of Hawthorne, now with terrific views of the new Hawthorne Park, witnessed the neighborhood’s descent into poverty and crime in the 1970s and 1980s.

The building underneath all the balconies is product of one man, simply known as D. Mallory, who was moved to improve the condition of destitute youth in the “riotous” Township of Moyamensing, specifically in the area we now call Hawthorne. He wanted to create a school where he could “gain some influence” over the kids and make them successful adults. The idea eventually morphed from a school to a home and school in the same guise as Girard College, which had just opened, in 1848. After getting support from some wealthy Philadelphians, the Moyamensing Union School and Children’s Home was founded on June 21, 1849. The boarding school opened in a small house on the 1100 block of South Street on September 1st of the same year, with 12 child-residents and no budget. 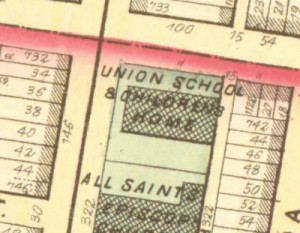 In April 1851, the Moyamensing school was officially recognized by the state legislature and was re-named the Union School and Children’s Home. By this point, the little house on South Street was crammed with 70 boys and girls. With some aid from the state (this was a progressive period in state politics, which resulted also in the consolidation of Philadelphia into a large, professionally run metropolis and Fairmount Park), a patch of land was secured at 12th and Fitzwater Streets for the erection of a large building and grounds. The children moved there on March 9th, 1854.

At the new building, the Union School served white destitute children–orphaned, neglected, or deserted–aged 2-13. The children were clothed and fed and given Kindergarten instruction, the school also serving as an early kind of adoption agency. In 1874, the Union School absorbed a similar organization known as the Home for Little Wanderers and built an addition on the building to accommodate all the new child-residents. The Union School and Children’s Home was then renamed the Southern Home for Destitute Children.

Fifteen years on, the 12th and Fitzwater facility was already overcrowded and inadequate. The organization was even holding some of the older children in small apartments at 1116 Fitzwater a half-block away (also still standing). A new building would be required for the 121 child-residents. In 1889, the organization acquired a very large lot at Broad and Moore Streets and built, over two years, a stately new residence designed by James Windrim. The Southern Home for Destitute Children moved to their new campus on October 31, 1891. By this point, over 5,000 children had come and gone. 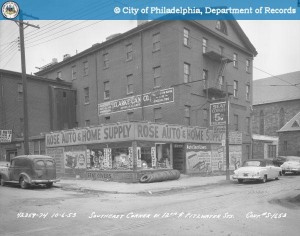 As Rose Auto in 1953. Check out the Clarke Can Co. ghostsign | Image: PhillyHistory.org, a project of the Department of Records.

In 1905, the building at 12th and Fitzwater was acquired by Benjamin G. Taite for his Taite and Sisler Tin Box Company. Tin containers were all the rage at the turn of the 20th Century–Taite and Sisler was one of many tin start-ups in Philadelphia. They remained in the building for ten years before the company was bought out by the behemoth of Philadelphia tin manufacturers, the Clarke Can Company, which produced tin products in several buildings around South Philly and specifically used this one for making containers and boxes. They stuck around for the next several decades.

In the 1940s, the building became a retail outlet for the local Rose Auto and Home Supply chain of auto accessory stores. The store kept on for a stunning six decades, witnessing the neighborhood’s upheaval in the early 1960s with the construction of the Hawthorne Square/MLK Plaza housing project across the street. The chain changed its name to Acme Auto Supply in 1978. By the time the company’s owner died in 2001, the project towers were demolished and the neighborhood had begun its long but successful revitalization. 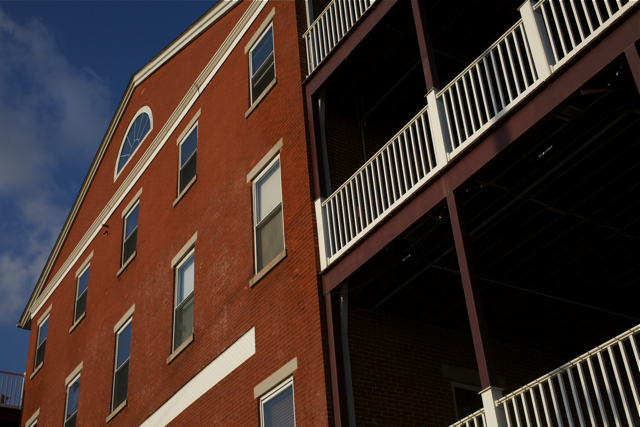 In 2006, developer Tony Rufo, whose father grew up nearby, converted the 12th and Fitzwater building into condos and called it Fitzwater Lofts.

Though the building easily could have been historically registered a long time ago, it wasn’t–this is an example of preservation by reuse, not by restoration. The lack of historic certification allowed Rufo to add all the balconies–a sure selling point with the terrific new park down below.