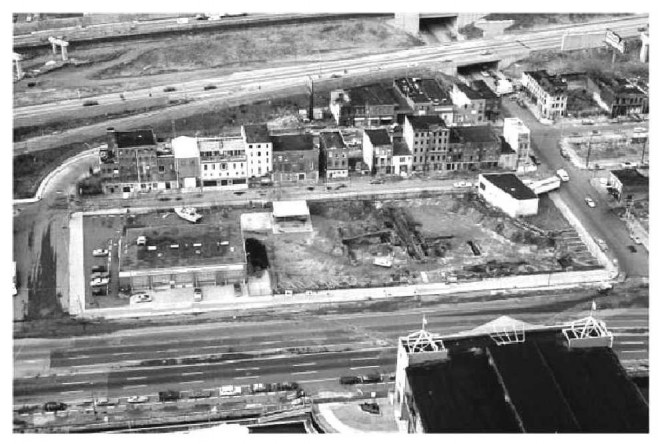 An overhead shot of the West Shipyard site in the 1980s. | Photo: from The Buried Past: An Archaeological History of Philadelphia

Archaeological firm John Milner Associates will begin excavating this month at the site of the West Shipyard, an American slipway that operated in the 17th and 18th centuries. The team will dig up to up to four trenches, all five feet wide, at the southern portion of a parking lot next to Vine Street, between Water Street and Columbus Boulevard, across from Dave & Busters (Pier 19). (One will be twenty feet long; the others from 30 to 45 feet long. Depths willbe from 4 to 8 feet.) This spot was originally part of the West Shipyard site, one of four local shipyards fabricating fishing craft, riverboats and oceangoing vessels along the Delaware River.

The Delaware River Waterfront Corporation, which funded the project, is trying to attract visitors to the waterfront site– perhaps the same visitors who went to the archaeological dig at the President’s House. The West Shipyard dig will be open to the public on July 18th, from 1-3 PM; July 19th from 10 AM – noon; and on July 20th from 1 – 3 PM.

James West (d. 1701) set up his shipyard on the west bank of the river as early as 1676, years before the arrival of William Penn in America. In the days before dry docks, sailing ships needing repair would be dragged up slipways (launching ramps) to enable repairs to be made. New vessels, needless to say, were also built on such ramps. A ropewalk (a long straight narrow lane where rope was made) was immediately north of the West Shipyard. 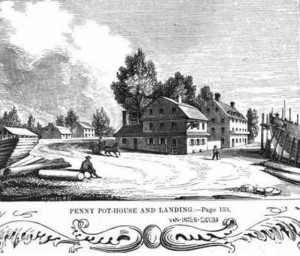 The Penny Pot Tavern, with the bow of a ship at the West Shipyard showing. | Photo: from The Buried Past: An Archaeological History of Philadelphia

The bowsprits of ships at West’s yard almost reached the eaves of buildings on Water Street. One of these was the renowned Penny Pot Tavern. West bought this well-known landmark from a widow in 1689 or 1690. The tavern was a two-story brick structure situated three houses north of the northwest corner of Vine and Water Streets. The place was allowed to sell beer for “a penny a pot” (or quart) as per the Duke of York’s decree in 1682. The Penny Pot sold beer made from cheap molasses; beer made from more expensive ingredients was roughly double the price at most other brewhouses. A 1/4-size facsimile of the tavern is on the roof of the building currently on the site.

After West’s death in 1701, his son took over and developed the shipyard into a miniature “company town,” complete with shops and inns to support its workers. But the yard became less useful as ships became both larger and equipped with steam engines, driving propellers, and paddle wheels. Hauling mechanized ships ashore was no longer practical. 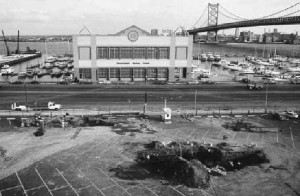 The old Hertz parking lot | Photo: from The Buried Past: An Archaeological History of Philadelphia

The West Shipyard had faded from the scene by the early 1800s, and the old slipways and quays were filled in as Philadelphia’s waterfront was pressed farther east into the Delaware. As an indication of this process, excavation for the nearby Philadelphia anchorage of the Benjamin Franklin Bridge (extending from Columbus Boulevard to Front Street) in the early 1920s revealed colonial-era wharf construction. The bridge-builders also uncovered relics like 24-inch square hewn oak timbers and parts of a barge or boat framed with wooden pins. 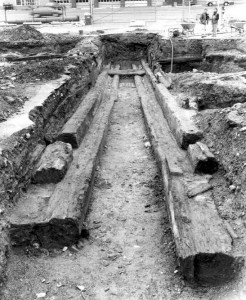 The West Shipyard discovered in the 1980s | Photo: from The Buried Past: An Archaeological History of Philadelphia

Disturbances at the West Shipyard site were relatively minor because the structures built there—a coal yard, a fruit warehouse, the Vine Street Market—did not have deep foundations. By the early 1900s, a rail yard of the Reading Railroad covered the block. Now topped by a parking lot across from Pier 19, the West Shipyard may be the last intact vestige of Philadelphia’s colonial port heritage.

A small archaeological dig in 1987 was funded by the William Penn Foundation and co-sponsored by the Philadelphia Maritime Museum (the Independence Seaport Museum today) and the Philadelphia Historical Commission. Work began in October and continued through December 1987. A team of six archeologists and other volunteer excavators under the direction of Carmen A. Weber, Archeologist for the Philadelphia Historical Commission, uncovered the remains of four wharves and a slipway (or ship’s way), dating to the late eighteenth and early nineteenth centuries, in good condition.

The ground was identified as the “Hertz Lot” from the car rental firm previously in business there. The dig was filled and paved over afterward to keep it preserved. This was the first archaeological site on the Philadelphia Register of Historic Places.

The Hertz Lot slipway is the only feature of its kind unearthed in excavations on the East Coast. Since the West Shipyard escaped the havoc wrought by Interstate 95, there is undoubtedly much valuable material buried not far underground. A dig here will surely yield a fine record of the parcel’s uses from 1676 until recent times. 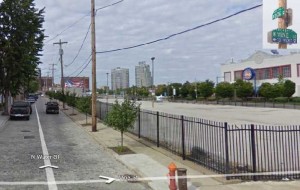 Editor’s Note: Some of the material in this post is adapted from Harry K’s book, Philadelphia’s Lost Waterfront. For more about the West Shipyard site, see John L. Cotter, Daniel G. Roberts & Michael Parrington, The Buried Past: An Archaeological History of Philadelphia.