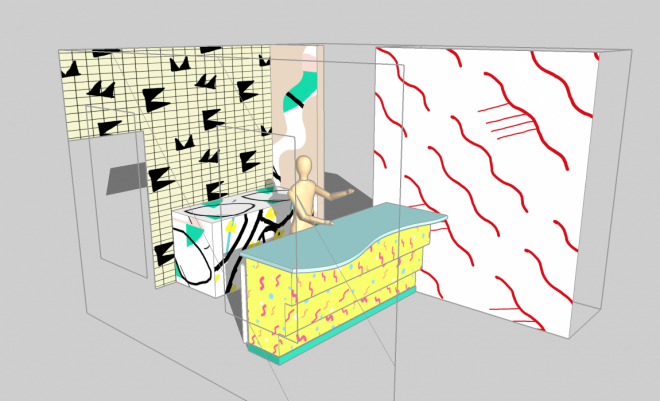 Editor’s Note: Hidden City creative director Lee Tusman sits down with Jason Hsu, the artist behind the design of Little Baby’s Ice Cream to open soon on Frankford Avenue. While Lee talks design inspiration with Jason, you have the opportunity to see the almost-finished product pre-opening, at our free, members-only tour Wednesday night (if you’re a member of Hidden City, you’ve received an e-mail invitation). The tour will include a behind-the-scenes introduction to Pizza Brain (and the Pizza Museum) as well. Want to come to this and get other member benefits, sign up today.

Lee Tusman: What exactly has your design process been like, and did you see the space before starting to make the design?
Jason Hsu: The process has been a long one. Pete Angevine, the owner, brought me in before they had even purchased the space, so we began with just talking about the feel of the store and ideas for using different materials. Initially I did sketches of patterns and rough renderings in Photoshop. Once an architect was brought in and set down the dimensions I worked with Google Sketchup to create a 3D model and imported the Photoshop work into the model. 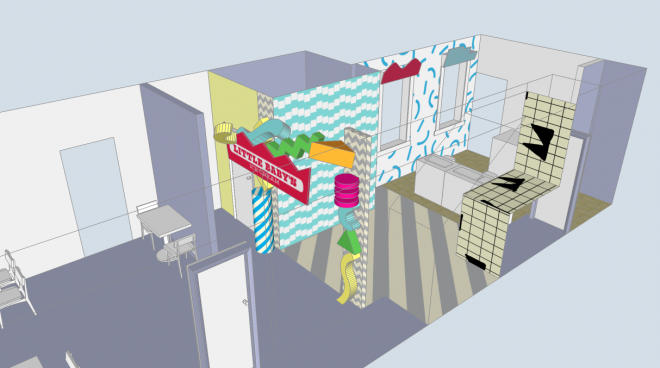 LT: What kind of things did you reference or think about? I’m under the impression you watched italian new wave films to inform your design!
JH: Pete did reference the Memphis Group–an Italian post modern design group, in the beginning, he also referenced Pee Wee’s playhouse and other architectural pieces that had some kind of optical twist or warped perspective.

Pete also talked about his idea of ice cream being entertainment and creating a theatrical space, so I kept that in mind. We talked about lighting as an important element of that. He seemed to shy away from any literal elements so I kept everything abstract. Something else I found really interesting during my search was the Triadic Ballet by Oskar Schlemmer who was associated with the Bauhaus school. 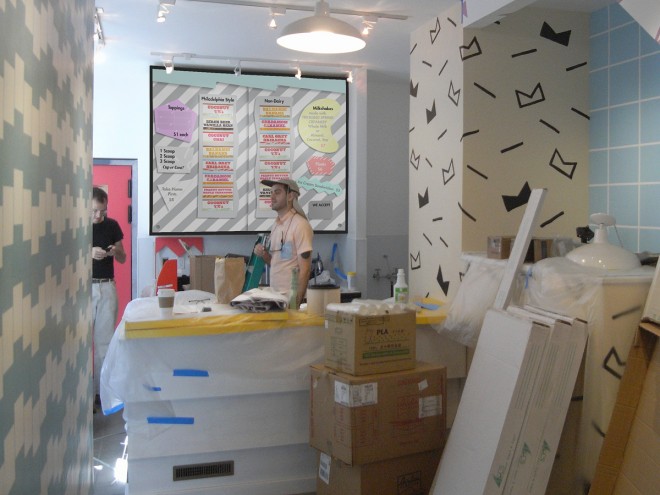 LT: What has the process been like when working with Little Baby’s?
JH: It has been great so far. Pete has been really open to different ideas and consistently excited about the space so it keeps the drive going. He’s been talking about creating something inviting but slightly off-center which appeals to my creative sensibilities.
There is a constant flow of revisions and discussion, without trying to overanalyze everything. We’re both new to the whole process, and although we may not have done everything in the most efficient way possible, and the timeline is constantly changing, the communication has been very good so we’ve been able to stay on the same page.

LT: As an artist based out of Space 1026, you have a different background than a traditional “interior designer.” How does this influence your design process?
JH: It’s true I’m not a traditional designer and I haven’t had any formal training in this area, so I can’t really say how my design process might be different, but being at Space 1026 has been real helpful in being able to draw from a lot of peoples’ experiences and asking friends for help and advice. Also I’ve worked on a lot of groups projects with the space, so I feel like my expectations for how a larger project involving a group of people comes together has become more realistic.

I actually did go to school for building materials that covered light frame construction and that has helped a lot when dealing with basic architectural elements. I guess that paired with a lot of do-it-yourself mentality at the studio led me to take on a lot of the actual production. With that in mind I tried to make things as minimal as possible in construction and design to make it more doable for myself and people that we know. 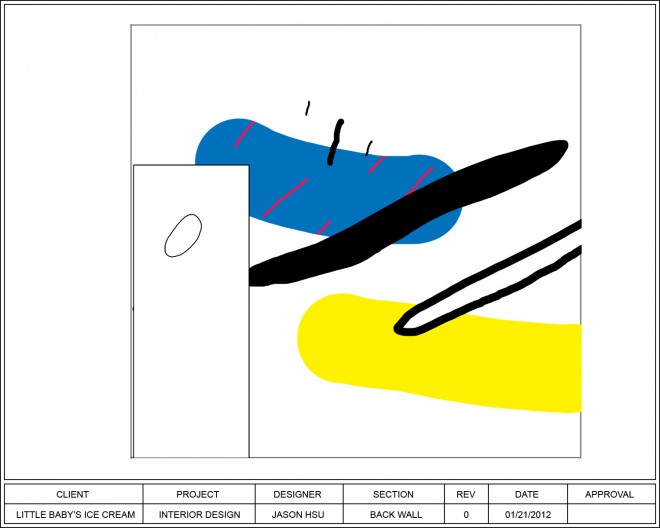 LT: Do you have any early drafts or sketches we could see? Do you draw or use CAD or did you make a maquette for planning?
JH: I had learned basic AutoCAD in a blueprint reading class when I was in school, but I honestly haven’t used it since. I did pick up Google Sketchup for this project and used that along with Photoshop & Illustrator to render out sketches and ideas. Being able to use computer software has been pretty crucial for me in order to plan out the dimensions and layout of all the elements.