Why All Philly Schools Look The Same 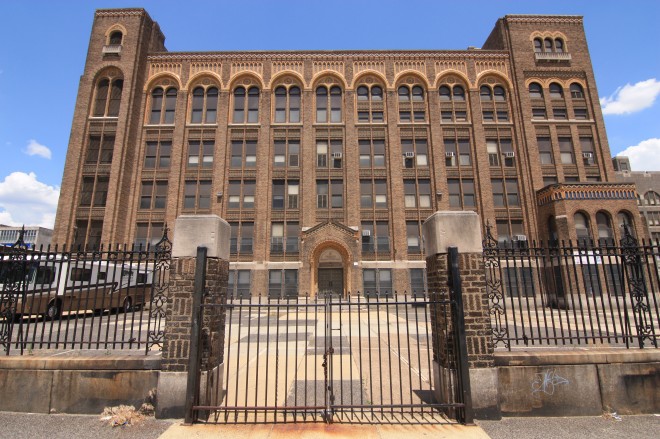 Earlier this year, the school district of Philadelphia announced that its $218 million budget deficit may result in more than 3 dozen school closures citywide. A hazy future could be in store for those decommissioned school buildings, potentially adding yet another distressed structural type to the redevelopment fray.

For anybody who has ever taken note of the gauge and aesthetic of most Philadelphia public schools, an indelible theme is evident. The reason: in the majority of Philadelphia neighborhoods developed prior to World War II, public schools were built according to the architectural vision of Irwin T. Catharine.

Himself the son of a Board of Education member, Catharine was appointed architect for Philadelphia schools in 1920. Only a few years into his tenure, he began campaigning for an overhaul of existing school buildings on safety, health and economic grounds. 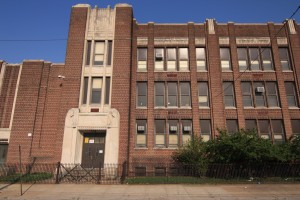 Catharine concluded that the inventory of school buildings he inherited was largely outmoded, posing impediments to teachers and students alike. Some he deemed fire hazards because of their timber-framed construction in an era of gas-light illumination. This claim was heeded only after a fire swept through the original Philadelphia High School for Girls building at 17th and Spring Garden streets in the early 1930s.

Other schools were in less-than ideal locations, Catharine said. He cited schools bordered by cramped alleys and dingy slums, where lack of sunlight made learning a lugubrious, if not gloomy task. Students faced severe overcrowding and had to use latrine toilets located outside main school buildings.

Catharine called for the modernization of Philadelphia public schools through retrofitting and rebuilding. Utilizing modern building techniques, he presided over a boom in school construction that hasn’t been matched in Philadelphia since. He introduced steel and concrete framed buildings to the district. A set of standardized blueprints ensured that any sized plot of land designated for a school had a ready-made plan to match. This meant that a school could be built promptly and within budget in no more than two years’ time.

Standardization did not mean that all schools shared an identical look. Dimensions might be common among Catharine-built schools, but style and ornamentation vary widely. Many schools incorporated common Philadelphia architectural styles such as Second Empire and Georgian Revival. Still others bore styles scarcely seen in the conservative Quaker city. Catharine favored Gothic Revival, epitomized in his designs for Overbrook and Simon Gratz high schools. A number of 1930s Catharine specials featured Art Deco details. The hulking Bok and Dobbins vocational high schools – in South and North Philly respectively – are built in high Deco style, as is the Clara Barton School on Wyoming Ave. 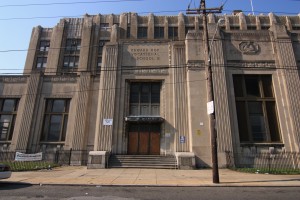 Catharine was nothing if not an innovator. He pioneered the use of gardens and recreational space atop school roofs and included a cafeteria in every school. Cafeteria access meant students no longer had to trek home and back again for their mid-day meals.

Another crucial upgrade (taken for granted today) was the school bathroom. Catharine eliminated the outdoor latrine system by locating both a boys’ and girls’ bathroom on every floor of every school. In a 1925 interview with the Philadelphia Public Ledger on the issue, Catharine spoke of a specific decision he made about form and function in school bathrooms:

“Once every [toilet] partition put up was wood; nowadays white marble is used. And the children have been the direct cause of this. There is something in the nature of every boy which makes him want to carve his initial or whole name in a wall. If he isn’t clever enough with his pocket knife, he writes his name. White marble partitions and walls make it impossible for him to use his knife.”

Sadly, Catharine could not foresee the effect that Sharpie markers would have on his marble. 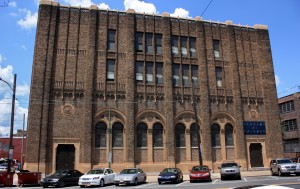 Fittingly, however, Catharine’s greatest masterpiece was not a school at all, but the Board of Education building he designed for 21st and Winter streets. A magnificent structure, combining Classical Revival and Art Deco features, the building served as the School District’s headquarters until it was sold and turned into condominiums in 2005.

As an architect, Catharine has more buildings standing in Philadelphia today than Furness, Trumbauer, Chandler and Kahn combined. Fortunately for Philadelphia, nearly all of the one-hundred plus schools built during Catharine’s tenure are listed on the National Register of Historic Places, protecting them against demolition, or careless redevelopment. So if the ailing school district opts for a property sale, this unique structural legacy isn’t likely to suffer.

As developers set their gaze on up and coming parts of town, a few vacant Catharine gems are already being eyed for repurposing. Plan Philly and Philadelphia public school news source “The Notebook” have published stories about the Thaddeus Stevens School of Practice on 13th and Spring Garden, which is being eyed for a project by developer Eric Blumenfeld. In Northern Liberties, the former Daniel Boone School at Laurel and Hope streets (abandoned throughout the 1990s) went the condominium route in the early aughts. 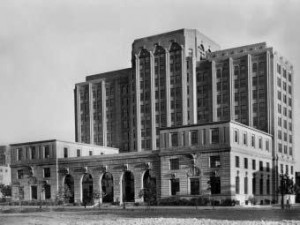 With the buildings he designed prime for redevelopment, it’s time to give credit where credit is due and add Irwin T. Catharine’s name to the list of Philadelphia’s revered architects.