Who Has Seen The Indian Pole? 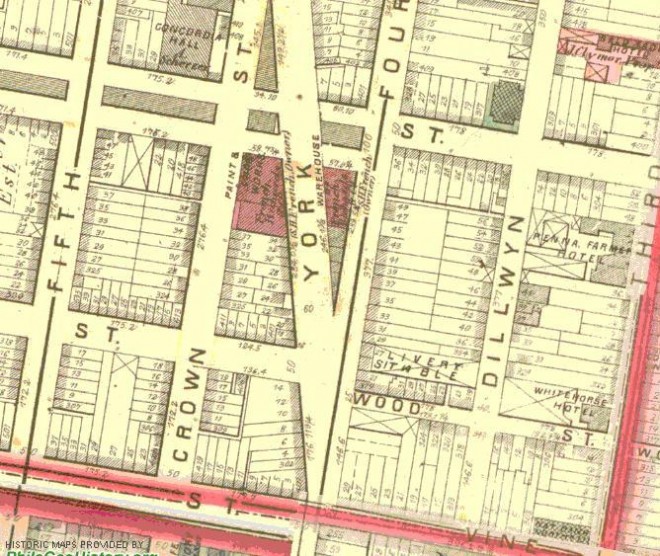 The Indian Pole stood in the center of this image, which is from a 1875 Philadelphia Atlas. The triangular park is gone, replaced by the abutments to the Vine Street Expressway.

Editor’s Note: The irrepressible Harry Kyriakodis will follow up his Lost Waterfront with another History Press book, this one on the Northern Liberties (Northern Liberties, Philadelphia: A Brief History, forthcoming). But like all history explorers (and Harry has one of the largest private collections of Philadelphia books in the city), sometimes Harry comes up short. He needs your help in solving a mystery: who has an image of the Indian Pole?

To me, the most storied region of Philadelphia is along the city’s original northern border with the Northern Liberties. Through these parts once ran the Old York Road, perhaps the earliest and most significant land routes in the mid-Atlantic region. And in this vicinity was an 85 foot high flagpole with a sizable Native American figure perched on top, supposedly put up in 1819 to commemorate the last Lenni Lenape council held in Philadelphia. The towering Indian stood at the intersection of York Road and Wood Street, near Vine.

The last mention of the Indian Pole I can find was in a Bulletin column by writer and urban explorer Christopher Morley, as part of his collection, Travels in Philadelphia (1920):

As I turned off Callowhill street, at the oblique junction of York avenue, leaving behind the castellated turrets of a huge brewery, I came upon an interesting sight. Where Wood street cuts York avenue and Fourth street there stands a tall white flagpole, surmounted by an enormous weather-vane representing an Indian with bow and quiver, holding one arm outstretched….

Mr. Renner, who has taken the landmark under his personal protection, tells me that the weathervane was erected many years ago to commemorate the last Indian “powwow” held in Philadelphia, and also that it is supposed to have been a starting place for the New York stage coaches. However that may be, at any rate, the original pole was replaced or repaired in 1835, and at that time a sheet of lead (now kept by the Historical Society) was placed at the top of the pole bearing the names of those who had been instrumental in the restoration. The work was done at the expense of the “United States” Fire Engine Company, that being the day of the old volunteer fire departments.

Apparently the Indian Pole became a kind of rallying point for rival fire engine companies, and there was much jealous competition, when steam fire apparatus was introduced, to see which company could first project a stream of water over the top of the staff. This rivalry was often accompanied by serious brawls, for Mr. Renner tells me that when the Indian figure was repaired recently it was found to be riddled with bullet holes. This neighborhood has been the scene of some dangerous fighting, for St. Augustine’s Church, which was destroyed in the riots of 1844, stands only a few yards away down Fourth street.

In 1894 the pole again became dangerous, not as a brawling point, but on account of age. It was removed by the city, but at the instance of Mr. Howard B. French, of Samuel H. French & Company, the paint manufacturers on Callowhill street, the Indian figure and the ball on which it revolved were kept and a new pole was erected by Mr. French and four other merchants of the neighborhood, T. Morris Perot, Edward H. Ogden, John C. Croxton and William Renner (father of the present Mr. Renner).

That pole, which is still standing, is eighty-five feet from ground to truck. The Indian figure is nine and one-half feet high; it stretches nine feet from the rear end of the bow to the outstretched hand. The copper ball beneath it is sixteen inches in diameter. Mr. Renner says the figure is of wood, several inches thick, and sheathed in iron. He thinks that the hand alone would weigh 150 pounds. He thinks it quite remarkable that though many church steeples in the neighborhood have been struck by lightning the Indian has been unscathed. On holidays Mr. Renner runs up a large flag on the pole, twenty-one by thirty-six feet.

Other books mention the Indian Pole, so Christopher Morley wasn’t hallucinating. This is from the Fourth Annual Message of Edwin S. Stuart, Mayor of the City of Philadelphia (1895):

On May 3d [1894] the Indian pole at York road and Wood street, one of the old landmarks of the City, was taken down by the employees of this Bureau, it having become decayed at the butt. It had been condemned. The Indian and other effects were brought to this office and placed in the store-room. The business men in the neighborhood of Fourth and York road and Callowhill street, becoming interested in the restoration of the figure to its old position, bought a new pole, 85 feet in height, upon which the figure was placed after receiving a new coat of paint. By request, on July 3d the employees of this Bureau again raised the pole to its original position. All documents pertaining to the raising of the pole, etc., were inclosed in a lead case, and placed in the copper sphere under the Indian’s feet at the top of the pole.

The original Indian pole at the “junction of Fourth street and York road was struck with lightning; another was erected about 1819, which was taken down in 1835, and the present Indian pole (1854) erected at that time. It has always been known as ‘King Tamane.'”

The Indian Pole disappears from the record after Morley’s 1920 account. Its site is now covered by the landscaped abutments of the Vine Street Expressway, built in the 1970s. All my attempts to locate a photo of this thing have failed, as have my efforts learn what happened to it. I’ve searched PhillyHistory, GeoHistory, Historic Aerial Photos, and have contacted local historical societies and art museums; no one I spoke with had ever heard of the Indian Pole. Perhaps “King Tamane” was a more formal name for the pole, but the above quote is only reference for that.

I liken the mysterious Indian Pole to the Colossus of Rhodes, the huge statue of the Greek Titan Helios erected between 292 and 280 BC. That hundred foot tall work was destroyed in an earthquake after standing only 56 years, but remained (broken) on the ground for 800 years–!–for travelers to see. Yet the Indian Pole, standing on the same spot in Philadelphia for at least twice as long, is entirely and utterly gone, including all memory of it. You’d think that the final removal (or the toppling over) of a 9.5 feet tall wooden Indian figure from up high would have been recorded somewhere.

Do you know what happened to the Indian Pole, or where I can find a picture? 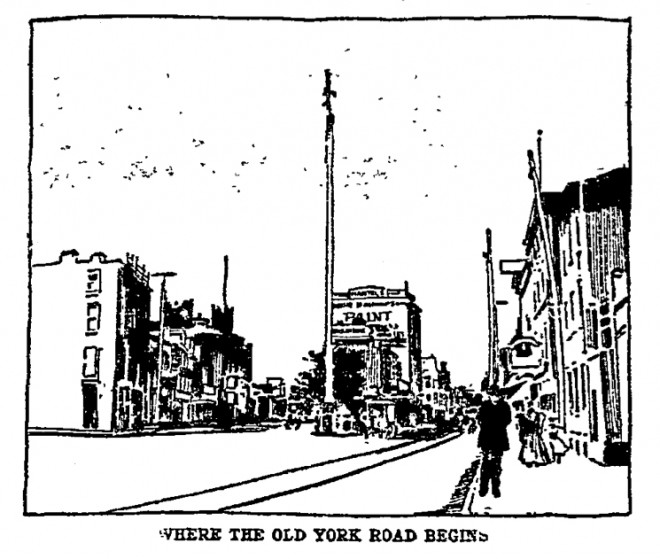