What To Do With The City Branch: Return It To Transit As Light Rail

Editor’s Note: On May 25th, we reported that the Community Design Collaborative had awarded a service grant to ViaductGreene, the group who has presented a vision of a single, connected linear park comprised of the above ground Reading Viaduct and the submerged railbed (the City Branch, one of the oldest railways in the US) that runs west along Pennsylvania Avenue behind the Barnes Museum. That report produced a flurry of comments calling the idea into question. Most of the commenters hoped to see the City Branch returned to passenger rail service, connecting the transit juggernaut near City Hall with the less-than-perfectly-served Art Museum and Fairmount Park. Given the contentiousness of the response, we asked proponents of each side to make a case. What follows here is a vision for light rail by Hidden City Daily contributor Stephen Stofka. Click HERE for Paul vanMeter’s case for creating a linear park. 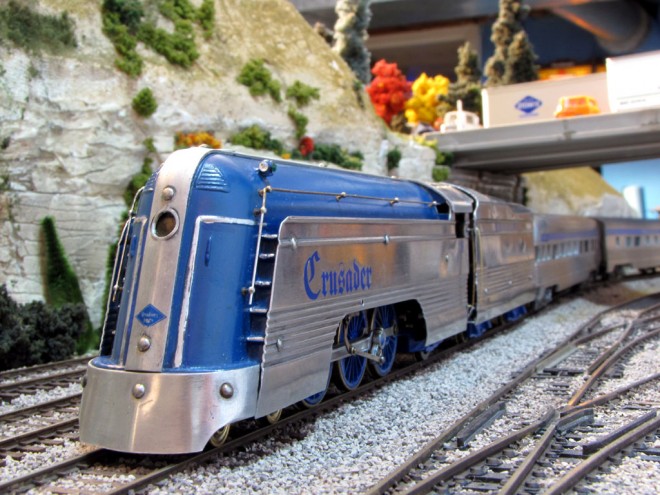 The ViaductGreene proposal being entertained is for a sunken linear park between the Rodin Museum and 13th Street, where it would meet the Reading Viaduct (at Noble). This proposal has proved controversial. In fact, the majority of readers who commented on the Hidden City report announcing a planning grant for the linear park were strongly opposed to the idea.

What are its problems?

First off, it doesn’t fill an immediate need for parkland, the way the Reading Viaduct does. The Callowhill neighborhood doesn’t have any parks. By contrast, the small Matthias Baldwin Park at 19th and Hamilton Streets offers a centrally-located neighborhood park for the neighborhood west of Broad. Green space is further augmented by the Community College of Philadelphia’s main campus, Logan Square, and the Benjamin Franklin Parkway.

So, if the neighborhood west of Broad already has adequate park access, and a bikeway will be mirroring the City Branch cut a mere 500 feet to the north, what is the purpose of this park? 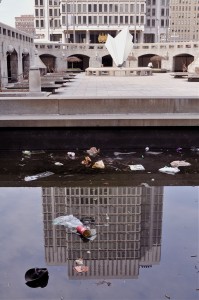 Our second concern is safety. Remember our last experience with a sunken park, the just bulldozed Dilworth Plaza? The sunken part of the plaza was avoided, shunned: it became a homeless encampment and outdoor latrine. So shunned was it that even when Occupy Philly was out in full force, none of its encampment ventured into it. And we decided it wasn’t worth it—-we’re getting rid of it as a sunken public space, turning it instead into a waiting area.

We’ve proven that sunken parks aren’t really a good idea—-they don’t feel safe or clean—-so why are we pursuing a new one? And again, this proposal doesn’t bring anything new to the area that isn’t already there or being addressed.

Access is also a major consideration when dealing with sunken parks. How to get down safely and easily? Granted, it also is with elevated parks, but safety and cleanliness are more pressing concerns with sunken ones.

So we have three major issues the City Branch would have to deal with: (a) lack of clear purpose and reason for being, apart from its own novelty; (b) strong concerns about safety and concomitant cleanliness; and (c) concerns about overly circuitous and indirect access. Of these, the first is the most insistent and persistent—-why go there if, outside of its novelty value, there’s nothing to see or do there you can’t already do nearby? It’s mostly because of these reasons so many people think ViaductGreene’s proposal is just a bad idea. 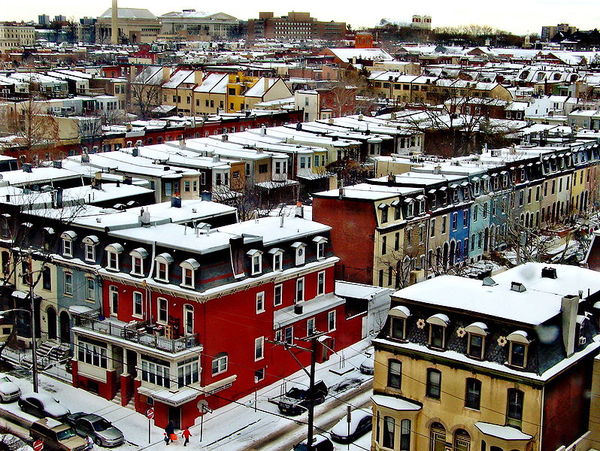 What are the alternatives? Most people think that putting rail into the City Branch cut is a much better idea. There’s a clear purpose—-the route parallels Center City west of Broad and can then angle into it through Callowhill. It links destinations, such as the Barnes, Rodin, Art Museum, and (possibly) the Zoo, and at the same time, links highly-walkable neighborhoods like Fairmount and Spring Garden. The areas it passes through are rapidly growing—-the neighborhood west of Broad added some 20 percent to its population in the last decade, and Callowhill’s population doubled. In other words, it goes somewhere and picks people up on the way there.

The major strength of any rail proposal is the fact the City Branch cut is already completely grade-separated. That means that there are no railroad crossings at all along it, and it means rail equipment can get up to its full speed there. The major disadvantage for such service, however, is that it runs through what were once some rather underbuilt and disinvested neighborhoods. This decline bottomed out in the late 1990s and early 2000s—-and, as has been pointed out, the area this branch traverses is growing.

The elegance of a rail line here is that it would be potentially cheap to build: around $200 million, even less with strong value-engineering. For light rail, a connection to the route 15 trolley can be made, linking the line to the Zoo, and to the 11th-12th Street trolley tracks, connecting into Center City via Chinatown and Market East. On the east end, a connection to the Ridge Spur is viable, with a negligible amount of cut-and-cover tunneling along Noble Street for the same coin—-and this also offers the option of extending such a line north, along 33rd Street through Strawberry Mansion up to East Falls and possibly even Roxborough. Between the destinations, the neighborhoods, and the ability to link the area northwest of Center City with the latter’s eastern half, this route would have extremely high ridership. It’s a perfect starter line, getting it done for less. 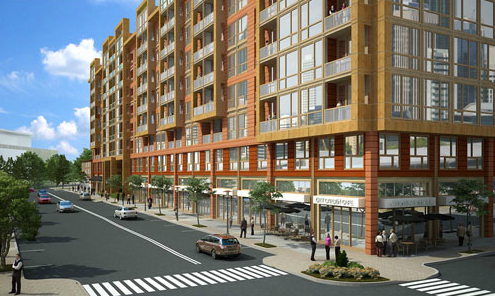 This same inexpensiveness, coupled with high ridership, makes it a superior rail project even vis-à-vis other worthy ones, such as the Navy Yard extension of the Broad Street Subway. Unlike that proposal, much of the infrastructure already exists, and linking it up would be the primary goal of the project; the Navy Yard Extension needs an entirely new “wet” tunnel (meaning it would be under the water table), necessitating high construction and maintenance costs for what will be, until the Navy Yard has largely filled in, rather modest ridership. By contrast, the City Branch and its connections are all, or nearly all, dry cuts and tunnels, with significantly lower long-term maintenance.

These advantages—-filling a clear transit need, and doing so quickly and inexpensively-—are highly appealing, In fact, this project can be done so quickly it is almost shovel-ready as-is—just pick the mode and go. The Navy Yard project, by contrast, would still not be out of its technical feasibility studies by the time this one is done. Work on it, by all means, but don’t squander a golden goose such as the City Branch!

The $200 million budgetary figure leads me to another cost consideration: it is cheaper than ViaductGreene’s proposal. How so, you ask? Well, railroad rights-of-way do tend to need environmental cleanup before they can be made ready for a park. New York’s High Line had that problem, as does the Reading Viaduct. These cleanup costs are a money pit. By the time the roadbed can be made ready for a park use, some $300 million will already be spent. Yes, the cleanup costs associated with a park conversion alone are a third more than a reasonable total budget for rail restoration. A rail project, naturally, doesn’t need to worry about such extensive environmental concerns because the publicly-accessible parts of the right-of-way are either elevated above or capped over. 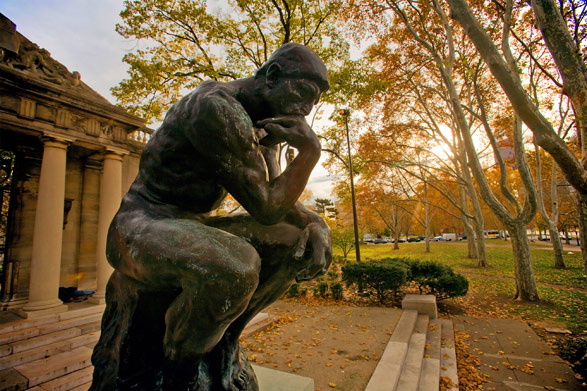 The Thinker at the Rodin Museum, contemplating this idea | Photo: J. Smith for GPTMC

So, with the advantages of low cost, potentially high ridership, and fast realization, why wait? Shouldn’t we already have a strong rail proposal for the City Branch?

How are we going to pay for it? The reason I am adamant about strong value-engineering is because the costs are already low enough that, if they are trimmed down a bit, the project can qualify for the federal Department of Transportation Small Starts grant program. And we can look for city, state, and private support. This will, of course, take time.

But now let’s flip the funding question on its head: ViaductGreene only has a preliminary planning grant. How do they propose to pay for their project? Half the High Line’s budget was privately raised-—and that was with the advantages of transportation obsolescence and near-unanimous community support. The usual sources can only go so far, especially with showpieces like this kind of park.

Didn’t SEPTA study returning rail to the City Branch before? Yes—back around 2002. But as the Census clearly shows, context has changed. Biases inherent in ridership modeling back then have been identified and are being weeded out. With a strong enough, frequent enough service, more modern ridership projections suggest this line would be quite busy—a projection to aim for would be about a thousand riders per station.

Who will advocate for the vision? That’s the hardest question of all. Rail advocacy for the City Branch has existed consistently for several years, but has been much more nebulous, mostly consisting of conversational agreements. ViaductGreene has only existed for about a year, and mostly in conversation with other Reading Viaduct proponents. Rail advocates, even those in on the Viaduct conversation, thought that their City Branch cut proposal was more silly than serious, a way of differentiating themselves from other Viaduct advocacy groups. It’s only in the past few weeks that the City Branch cut greenway has been advanced as a serious proposal, and moving far faster than they expected.

Much of this conversation has been taking place on Philadelphia Speaks here. If you want to make your voice heard, we are looking for help, and would value any sort of skill you bring to the table. Let’s get enough voices together, and we can start working on a serious proposal of our own.