This In From The Department Of Sleuthing 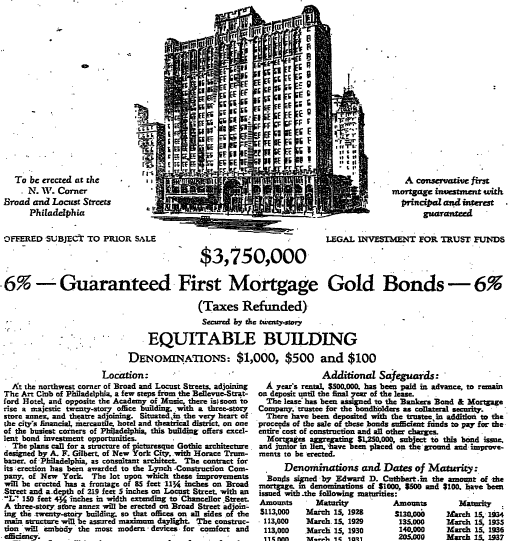 There’s a little less Power in the Trum, after all. Monday’s article by The Shadow on the Equitable Trust Building caused the folks at the Athenaeum to look through the Horace Trumbauer files for evidence that the gilded age architect had in fact designed the building. Their own Philadelphia Architects and Buildings database said he did. The building’s nomination to the National Register of Historic Places said he did.

“We couldn’t find any reference whatsoever in our drawing registers or account books, in the Trumbauer files here at the Athenaeum, which would mean his firm didn’t make any drawings and didn’t charge a commission (not bloody likely for a 21 story office tower!),” writes the Athenaeum’s chief archivist Bruce Laverty in an e-mail. “The National Register nomination form (below) cites this as Trumbauer’s work but the actual architect of the building was A.F. Gilbert of New York (*see correction at bottom), who had an even stronger architectural pedigree than Trumbauer, having led Daniel Burnham & Co.’s architectural office in New York and having designed the 1915 Equitable Building at 120 Broadway, one of the tallest, if not the tallest structure in New York at the time.”

Laverty confirms that Louis Cahan hired Gilbert. Trumbauer, he notes, was involved in the process as the consulting architect.

Athenaeum staff have cleaned up the Philadelphia Architects and Buildings listing, which you can find HERE.

* Correction: Ernest R. Graham was architect for the 1915 Equitable Building in New York City. You can read more about that building HERE.