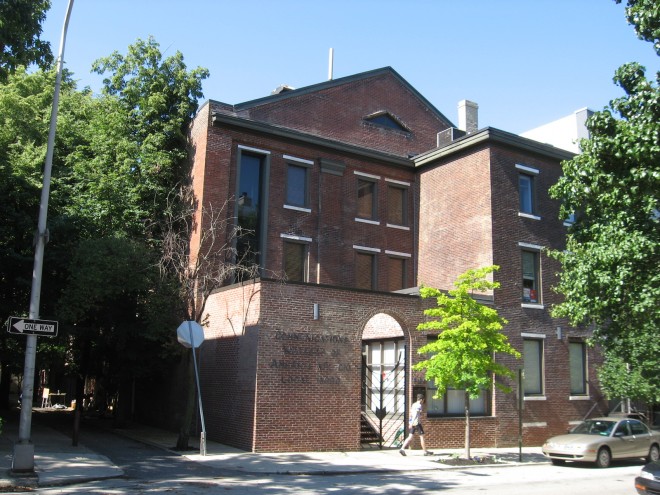 Once a Presbyterian church, now home to the Communications Workers of America Local 13000, 2124 Race Street is one of the few nineteenth century non-residential buildings in the Logan Square neighborhood and one of the only 1850s buildings still standing in Philadelphia. Built in 1855, this spare, unassuming structure has managed to outlast virtually everything around it. Other nearby buildings have been built and destroyed 3-4 times over in its lifespan. The building isn’t currently in any danger of demolition, but it may deserve a closer look from preservationists because of its rich religious and commercial history.

The congregation did not grow very quickly at first– it took almost five more decades before the Second Associate Presbyterian Church was built at the long-lost 600 block of North Franklin Street in 1849. Then, an influx of Scottish and Irish immigrants poured into Philadelphia, some of whom were members of the Associate Presbyterians’ progenitor denominations in their home countries. The Philadelphia congregation’s membership grew exponentially. The majority of these immigrants lived in the Kensington District (NOT the ‘hood we now call Kensington), the area called Fishtown today.

Trudging through the mud- and excrement-laden city streets of the era from modern-day Fishtown all the way to 4th and Walnut or Franklin and Green every Sunday was a huge hassle for congregants. In 1851, the demand for an Associate Presbyterian Church closer to the congregants’ neighborhood was so great that the Church was forced to sell their Franklin and Green building only two years after it was built. The Second Associate Presbyterian Church moved to Frankford Avenue between Girard Avenue and Phoenix (now Thompson) Street. The new church building stood at the current site of the popular Frankford Hall beer garden.

So what does this all have to do with a little building at 2124 Race Street? Well, the move to Frankford Avenue displaced 65 of the church’s members who lived in the no-man’s land that was the area west of Broad Street at the time. On November 17th, 1852, those disgruntled members formed the Third Associate Presbyterian Church and worshiped out of rented spaces; the first at 13th and Race Streets, the second at Schuylkill 8th and Market (15th and Market). 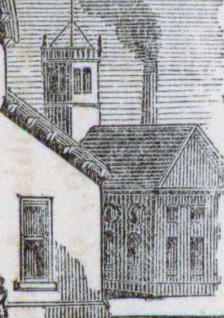 The Third Associate Presbyterian Church as seen in an 1869 drawing of the Mammoth Rink | Image: Philadelphia Architects and Buildings Project

The Third Associate Church considered itself a “Mission Station” to residents of what members called “a new part of the city,” the area around Logan Square. They raised $6500 to build a church in those far reaches, way out at what is now the 2100 block of Race Street. It would be much larger than any other church the Associates had built before: 44 feet wide, 70 feet long, with seating for 600 people. In alignment with the Third Associate Presbyterians’ values, the building had a simple design and was “free of the gayety found in more fashionable churches”. It officially opened for worship on December 2nd, 1855, one of the only buildings on the square block.

In the next two decades, development finally reached and enveloped the church building. Philadelphia Galvanizing Works, a massive industrial complex, was built to the west in 1860, while the Philadelphia Skating Rink (aka Mammoth Rink) was built and burned down to the east in 1869. The neighborhood became primarily industrial.

The Associate Presbyterians united with other denominations in 1858. The church then became known as the Sixth United Presbyterian Church until its last worship service on March 5th, 1880. The building then went into industrial use–it became home to the Guarantee Chemical Company in 1882. The company made concoctions for exterminators and produced patent medicines in the building until 1888, when it moved its chemical operations down the street.

In that year, the neighboring Philadelphia Galvanizing Works took over the property. The company built three floors into the interior and put a small addition on the front of the building. Changing its name to the Pennsylvania Galvanizing Company in 1898, the company stayed in its ever-expanding complex until at least 1915. The old church building passed in and out of use for the next six decades, getting combined and separated with adjacent buildings over that time. Its occupants included a contractor’s supply store and a film processing shop, among others. 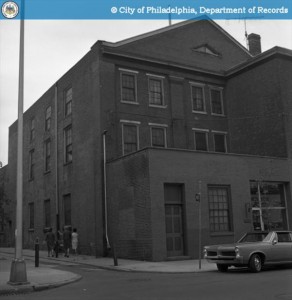 In the late 1970s and early 1980s, restoration and new construction began in the neighborhood. Around this time, the building was converted to offices and became home to the Graham Company, an insurance brokerage firm. The Graham Company moved its expanded operations to One Penn Square West in 1986. After that, the old church briefly became the Philadelphia Veterans Multi-Service Center.  Its current occupant is the Communications Workers of America Local 13000, the Eastern Regional Office for the massive telecommunications union, along with a few other office tenants.