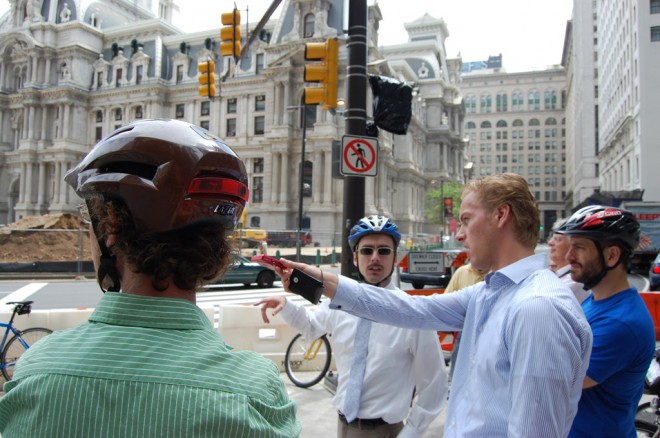 World-class bikeway expertise in the form of three Dutch transportation planners has come to Philadelphia this week, working with local planners and bike advocates in two days of intensive surveys and problem-solving sessions.

Widely recognized as the leader in bicycle commuting, the Netherlands has since 2010 lent planning assistance to six cities in the United States–Philadelphia is the seventh. At opening remarks at Temple University Monday morning, deputy mayor for transportation Rina Cutler acknowledged the value of encouraging the recent upsurge in bicycling: “This is about mobility and giving people choices in how they get around. It’s government’s responsibility that no matter how you choose to travel, you can do so safely.”

Dutch Cycling Embassy’s Tom Godefruuij outlined the major factors that have contributed to cycling’s remarkable success in the Netherlands. A key point is that Dutch traffic and transportation planners take cycling seriously as a full fledged mode of transport. 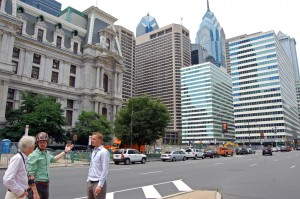 Much has been made in some circles about the danger posed by cyclists, especially in Center City. The Dutch designers examined how lack of bicycle facilities can contribute to unsafe behavior by all modes (drivers, pedestrians, and cyclists). Senior transportation designer Dick van Veen related how his road designs are reviewed by Dutch police before they are finalized. Van Veen said that if bicycle facilities are not included in the design of any road where the speed limit is greater than 30 miles an hour, the police flatly state that they will not enforce traffic laws on cyclists. Assessing the scene at the corner of 19th & JFK Boulevard, with four onrushing lanes of cars, trucks, and buses–and zero provision for bikes–he noted, “this is a hostile environment. It actively encourages bad behavior by cyclists.”

A problem not just in Philadelphia but in cities the world over is allocation of street width. Cities laid out a century or more ago could not foresee the crush of automobile traffic that would descent upon them. Even more to the point, those long-ago city planners could not have foreseen that countless vehicles would be left unattended for hours or days at a time in the streets, lining both sides and leaving only a third of the street width for the flow of traffic. Eliminating on-street parking is one way that the great European cities have paved the way for safe bicycle commuting.

Here in Philadelphia, however, on-street parking is considered about as sacrosanct as the Liberty Bell. The removal of on-street parking for bike facilities–a policy which has enabled the explosion of bicycling in the great cycling cities–is sure to run into a buzz-saw of neighborhood opposition. It’s a proven way to evoke what deputy mayor Cutler describes as an “amazing amount of resistance.” 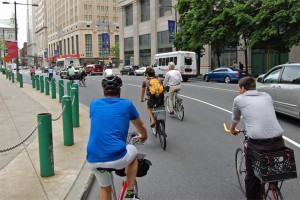 And yet, workshop participants can see past that to a future where safe viable alternative modes of travel will mean that there will not be the need for so much on-street parking. The Dutch planners remind us that their great cities have policies limiting automobile travel through their centers, thus making them foremost places for pedestrians and cyclists. Imagine City Hall, and the renovated Dilworth Plaza when it is completed, without a four-lane snarl of traffic engulfing it.  Imagine instead what conference organizer Aaron Ritz calls “areas of calmness” at the heart of this city.

The design teams will be presenting their recommendations at Temple University’s Beury Hall Auditorium, 13th & Norris Streets, on Tuesday afternoon June 19. The public is invited to view the presentations and participate in a moderated public discussion at 6:30PM.