Walking about, a promo card flashing “URBAN APIARIES” grabbed my attention. Honey flavors-by-zip-code? I was on the bee trail in no time!

May 15th 1863, was a very good day for Philadelphia’s Rev. Lorenzo Lorraine Langstroth, the acknowledged Father of American Beekeeping. Inked in his carefully detailed logbook: “Strong in bees & honey.”

The American Philosophical Society at 105 S. 5th Street in Philadelphia takes meticulous care of the few sepia-colored remnants they have of Langstroth’s writings. You must pass through layers of security, computer registration, keyed locker for your posessions and a high, thick glass vestibule to await delivery of any documents you wish to peruse. No pens. Pencil only, please.

Rev. Langstroth, born here on Christmas Day 1810, lived in Philadelphia for a time, eventually leaving to pursue his calling as a minister. He ended his days in Ohio, expiring at the age of 85 just as he was beginning to deliver a sermon.

Langstroth suffered lifelong “splitting headaches” and a litany of other nervous ailments noted daily in his diary, also housed at the Society’s library. It’s a wonder he could focus on unruly swarms of bees. Indeed, he wrote he was incapacitated for months at a time during which he could not stand the sight of bees…or even the letter “B”! Nonetheless, he persevered, imprinting his indelible mark on the practice of beekeeping – worldwide.

From his invention of the revolutionary movable frame to his discovery of “bee space” and his book “Langstroth on the Hive and the Honey Bee, A Bee Keeper’s Manual,” he built upon an intense childhood fascination with insects, reignited when he saw a glass globe filled with golden honey at a beekeeper friend’s home. Any one of the aforementioned innovations, pertaining to this day, would have secured his place in bee history.

The movable frame allowed easy access rather than destroying the hive to harvest the honey. “Bee space” was, essentially, a very thin layer of free space (the thickness of a single bee) uniformly surrounding all interior surfaces to support the natural life of the hive. His treatise on bees, written in a single winter and published in 1853, is still a classic in the field. 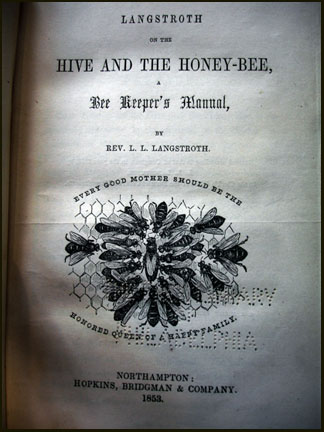 “Every Good Mother Should Be The Honored Queen of a Happy Family,” Langstroth, 1853. | Photos: Joseph G. Brin”

Langstroth never realized great financial reward for his breakthroughs. Though he and his wife fought to protect and extend his patent, his innovative hive construction was easily replicated by local carpenters, impossible to contain. 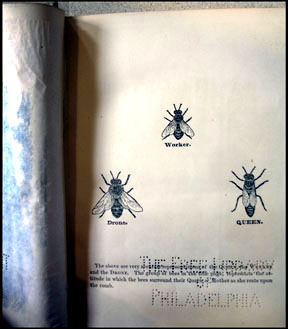 The preface to his manual interweaves religious beliefs and a consuming passion for beekeeping that sustained Langstroth through trying times. 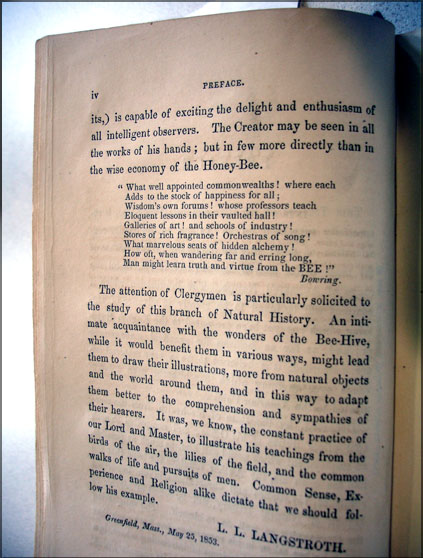 “Bees are extremely happy in the city,” says Annie Baum-Stein, co-founder of Urban Apiaries and owner of Milk & Honey Market (and Cafe). What started as a desire to provide the best honey for dining customers evolved into something much larger. Her Urban Apiaries business partner is Trey Flemming, owner of Two Gander Farm in Berks County, PA, where he keeps an apiary of 40 hives.

“A lucky brainstorm,” she says, led to the “Urban Apiaries” brand name. It’s a perfect name “as long as you know what an apiary is,” reminds Annie. An apiary is a location with more than one hive.

Her Dad came up with the striking graphics that, along with the name, tells the story. But you can’t visit Urban Apiaries, even if you’re exceedingly curious. It simply doesn’t exist in any one location. 35 hives are distributed in 7 apiaries throughout the city. Any given hive has approximately 30,000 bees at the height of the honey season. Above Paradiso Restaurant on East Passyunk in Philadelphia, Chef Corey Baver hosts Urban Apiaries hives. Flemming maintains them and extracts the honey, splitting the harvest with the restaurant. For a photo essay on the Paradiso hives click HERE. 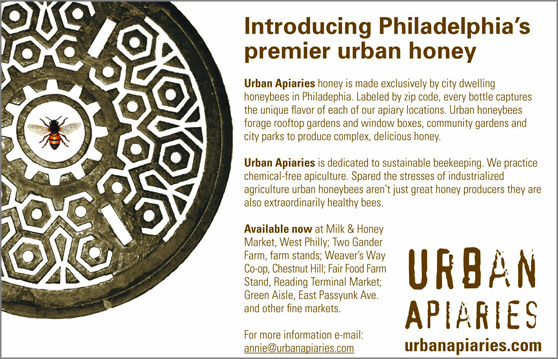 Honey flavors-by-zip-code result from the diversity of diets. West Philadelphia has a lot of street trees. South Philadelphia is treeless by comparison but has more hanging plants and window boxes. Even then a two block difference might yield distinctive contrasts in honey flavors.

“Philadelphia is ahead of the game but not the first city to be bee-friendly. Chicago was first,” says Baum-Stein. Bee-friendly criteria according to her includes a City Hall fully on board and municipal planting programs (not here yet) to support bee culture. “I’d like Philadelphia to be even more bee-friendly,” she says.

Baum-Stein and Flemming are partnering with different vendors in the city to co-brand with Urban Apiaries. So, for example, if your commercial bakery has a rooftop hive with Urban Apiaries you will be able to market its unique flavor to your own customers. “Our biggest focus is on expanding so we can have a greater yield. We sold out last January.”

The Urban Apiaries website is static but will evolve to emphasize educating the public rather than e-commerce. “If you’re really serious about sustainability then keeping bees is definitely the future,” Annie affirms.

“We have dozens of books on bees and can’t seem to keep them on the shelves,” a librarian at the Free Library of Philadelphia told me the other day.

Something in the air? Surging interest in urban beekeeping nationally–bee hives from backyards to rooftops–aligns with an equivalent increase in local food production and urban agriculture, in general. But when it comes to urban beekeeping, in particular, I have a little theory. It’s based entirely on a William Shakespeare quote discovered in the lining of Rev. Langstroth’s 1853 bee keeping manual:

“So work the Honey bees. Creatures that, by rule in Nature, teach the art of order to a peopled kingdom.”

Beekeeping culture has ancient origins, as far back as the cave dwellers. But we live in a kingdom of exceptional turbulence and change. It’s not all bad, but wouldn’t you agree that people may be craving order, pattern, and sweetness to counter the harshness and uncertainty?

Bees exhibit a structured life. Honey is sweet. Therefore, we want to learn from bees. “Discuss!”