c. 1802 map by Charles Varle, with the canal route shown with ovals.

With the recent effort on connecting the subterranean City Branch rail line to the Reading Viaduct (see Friends of the Rail Park), I was compelled to dig into the rail corridor’s history. How did the railroad end up here? The answer, hard as it may seem to believe, goes back thousands of years.

This corridor is the narrowest place between the Schuylkill and Delaware Rivers before it expands at and below Center City. While never accurately being confirmed, speculation in the 19th century indicated that in prehistoric times the Schuylkill River flowed to the Delaware along this very same path. The creek called Pegg’s Run, which today runs as a sewer under Willow Street (approaching the Delaware River), may have been a remnant of this ancient watercourse. 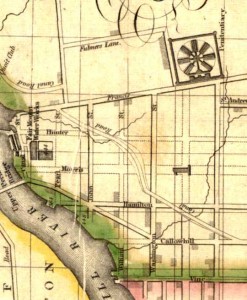 1824 map engraved by James H Young, showing “Canal Road” on the route of the abandoned canal.

In the 1790s, engineers chose this route–precisely because it was the narrowest point between the rivers–to build a canal from the Schuylkill River to the Delaware River.

The Delaware and Schuylkill Navigation Company was incorporated in 1792 to open a canal alongside the Schuylkill River from Philadelphia seventeen miles to Norristown, Pennsylvania. This initiative, led by Robert Morris, was likely the first public canal project in the United States. It was also part of an unrealized plan to bring fresh water from the Schuylkill River to Philadelphia.

The canal was hand-dug along the future route of Pennsylvania Avenue behind the Art Museum and all the way to Broad Street along this corridor. (Note that a canal in those days would only have been about fifteen feet wide and perhaps five feet deep.) Some canal digging also occurred on the east side of Broad Street, near where Spring Garden Street came to be, not far from Ridge Avenue, which was an old Lenape trail.

Work on the canal was suspended when investors in the Delaware and Schuylkill Canal company lost faith in the project and the company’s assets plummeted. The company went bankrupt in the mid-1790s, after spending about $220,000. However, occasional work on the canal reportedly occurred as late as 1798.

Much of the digging occurred through and alongside Springettsbury manor, one of the original estates laid out by William Penn for his family’s use, and named for his first wife, Gulielma Springett. The manor house, built by William’s son Thomas in the 1730s, was built not far from 20th and Callowhill Streets, where the City View condo is today. This is a stone’s throw from the Barnes Foundation Musuem on the Ben Franklin Parkway.

(The Springettsbury dwelling burned down about the time of the American Revolution. The spot was later occupied by the Foster Home Association, in a building raised by the Preston Retreat but not occupied by that organization until 1866. The Preston Retreat was a maternity hospital at which antenatal care became available for the first time in America.  Later known as the Preston Maternity Hospital, the facility eventually ranked number one in the world for safety at childbirth.)

Part of Springettsbury manor became the famous Bush Hill estate owned by Andrew Hamilton (the original “Philadelphia Lawyer”) and his descendants. This property contained the land now bounded by 12th Street to the east, 19th Street to the west, Vine Street to the south, and Fairmont Avenue to the north. The land was given by the Penn family (at the advice of James Logan) to Hamilton in payment for legal services rendered.

The Bush Hill manor house was located at what is now the south side of Spring Garden Street near 18th Street–more or less the site of old Philadelphia Mint building, now used by the Community College of Philadelphia. Andrew Hamilton died at Bush Hill on August 4, 1741, and was buried in the family graveyard somewhere on the grounds. Upon the estate’s sale to real estate speculators after the Revolutionary War, his remains and those of his children and other family members were removed to a mausoleum in Christ Church cemetery.

The Bush Hill mansion was subsequently rented to the government for use as the vice-president’s house by John Adams during the early years of his term.  During the Yellow Fever Epidemic of 1793, the house was adapted for as the main quarantine hospital for fever victims. It was sited on a hill (Bush Hill) and the grounds sloped downhill as far as Vine Street. Today, the topography still bears this out, as the ground at Vine Street is much lower than that at Spring Garden. This low-lying ground was where: (1) the Schuylkill River may have flowed long ago, (2) the aborted Delaware and Schuylkill canal was dug through, and (3) where the City Branch tracks came to be.

Around thirty-five years later after the canal company went bust, the right-of-way was used by the Philadelphia & Columbia Railroad, one of the earliest railroads in America and the first railroad in the world built by a government (Pennsylvania) rather than by private enterprise. It extended westwards from Broad and Vine Streets to Columbia, Pennsylvania. 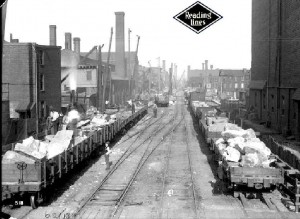 The City Branch line in 1894, showing Pennsylvania Avenue, looking east from 20th Street, before construction of the subway.

Started in 1828 and completed in 1834, the Philadelphia & Columbia Railroad laid its tracks in or along the abandoned canal bed.  Or it simply used the canal’s right-of-way, as authorized years before by the Commonwealth of Pennsylvania. It was a matter of convenience that worked out in that sparsely settled landscape.

The canal, by then, had turned into a surface street called Canal Road (at least near the Schuylkill River). This is a predecessor to Pennsylvania Avenue, a street that once went all the way to Broad Street and on the surface of which the railroad was laid.

At that time, this undeveloped district of Philadelphia was a bonanza to emerging industries, which needed lots of open space for their operations, as well as convenient access to both rivers, plus good land and rail routes to the rest of Pennsylvania and points north. One such company was the Baldwin Locomotive Works, whose factories came to be centered at Broad and Hamilton Streets. Matthias Baldwin opened his first facility there in 1836.

The Philadelphia & Columbia Railroad became part of the Pennsylvania Railroad by about 1850, except for the part in Philadelphia, which went to the Reading Railroad. The Reading Railroad completed the City Branch subway in the 1890s to eliminate traffic problems caused by tracks that crossed most of the city’s north-south streets at grade from the Schuylkill River to Broad Street. (There were too many accidents/fatalities of people getting struck by trains on Pennsylvania Avenue.) Over a million cubic yards of earth were excavated to create this sunken line, which is apparently the first subway project in downtown Philadelphia. 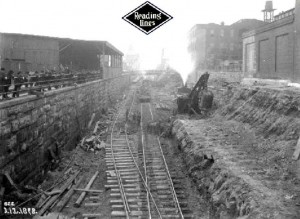 This line was active until a few decades ago, with one of its best customers being the Philadelphia Inquirer, which used to print its newspapers at its Broad and Callowhill Streets headquarters. The Inquirer used rolls of paper delivered via trains on this line, and used to distribute papers this way too. The sunken City Branch line turns northwest behind the Rodin Museum and continues under Pennsylvania Avenue as a closed subway. Part of that section of the subway is still used by CSX’s East Side line, formerly the B&O Railroad’s Philadelphia-Baltimore main line.