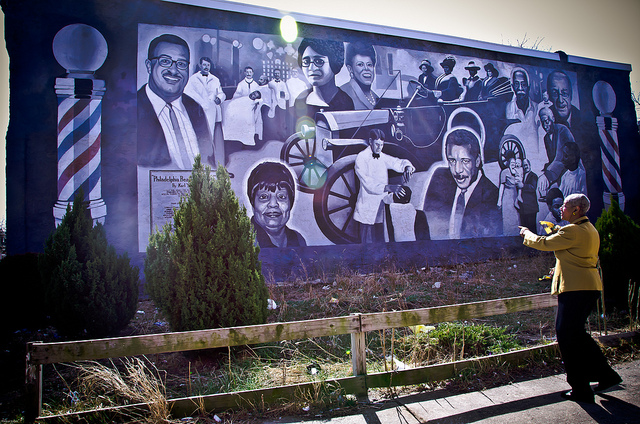 Editor’s Note: Shirley Randleman is president of the 52nd Street Business Association in West Philadelphia and is a well-known community activist. She and her husband began collecting antique beauty artifacts during their time spent working in the beauty industry and eventually created a museum to house their collection: The Philadelphia Beauty Showcase Historical Museum, which is now closed. Theresa Stigale visited Shirley as she prepared to move the the collection to its new permanent home and to find out the plans for its next presentation to the public. For Theresa’s profile of 52nd Street business owners, click HERE.

Theresa Stigale: Hard to believe, but this was the first mural done on 52nd Street.
Shirley Randleman: Yes, the Philadelphia Beauty Showcase Mural was was done in 2004 by Karl Yoder through the Philadelphia Mural Arts Program. It features a lot of important figures in the beauty industry, some of those honored on the mural are from West Philadelphia. That’s what makes it so great.

TS: The Museum is closed now; what’s the story?
SR: We always had the collection but formally opened in the the early part of the decade (around 2001-2002) at 510-12 S. 52nd Street and we were able to keep it open until about 2007. The collection is being re-formatted in preparation for donation so that it may continue into the 21st century.

TS: You found an excellent permanent home for the collection–one that resonates with the city’s African-American history.
SR: Our new home will be The Berean Institute at 19th & Girard and we will announce the opening date as soon as it gets closer. We chose that location because it is the only cosmetology and barber school (both trades together) still left in the city. The school itself has such an important historical and cultural significance–it has been operating for 113 years–that it seems like the perfect fit. To kick off the move, we are creating a brand new exhibit, “Legendary Women in the Beauty Industry,” as many African American women played very significant roles in the trade. We want to embrace that and remember their contributions through this inaugural exhibit. It will be the first of many rotating exhibits that we hope will draw attention to the museum. We want to ensure that it provides a real learning experience for both the students and the visitors. 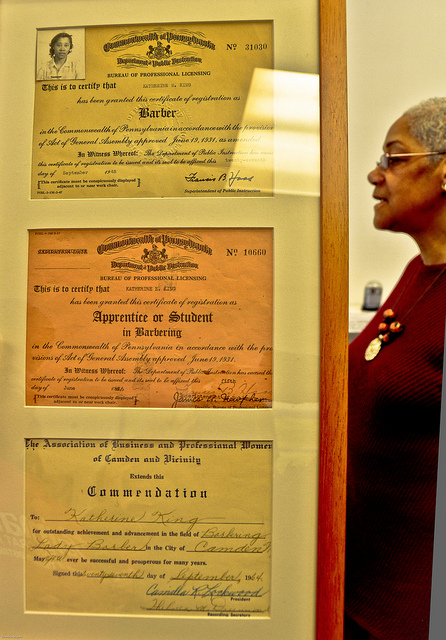 TS: There is a real social mission here.
SR: It’s not just hair and make-up, it’s as basic as humanity. In beautifying ourselves, we can make a real connection with each other. Beauty is universal, it’s what brings us all together. At the same time, what may seem offensive to one group or culture is perceived as beautiful by another group. We can view beauty from a different lens, to be more compassionate and humble when we see how others perceive their own beauty. We groom everyday. We can appreciate different cultures and their own grooming and imaging. It’s the cultural differences and mores that are rooted in humankind. There is no need to segregate ourselves. We can bridge the gaps by this understanding and use the beauty industry as a format to share and explain. 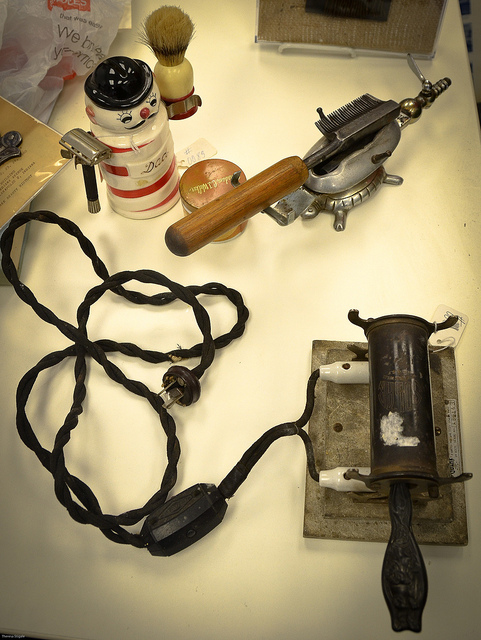 TS: You have more than objects to exhibit at the new museum.
SR: My husband and I were part of the beauty industry, collecting our own artifacts. Other people we met in the industry gave many of the pieces to us knowing that we would preserve them and share the information about each item. No one person would realize at the time the impact that their artifact would have when viewed in the context of a collection. These items were so fascinating to us. We also recorded interviews and the history of everything we could at the time. I am so happy that we did that; those recordings will be shared in new location, so visitors can hear the stories as they were told to us.

TS: How important was West Philadelphia to the beauty trade?
SR: So many people from this neighborhood contributed to the industry. Stanley Thomas was from West Philadelphia and devised the first barber hair charts. These were visual presentations of different hair styles so that a customer could just walk in and point to a picture; eventually even the military started using them. Yvette “Kinyozi” Smalls just passed in April of this year at 53. She was a local master hair braider, a hair sculptor, one of the pioneers. She was an advocate of braiding and appealed to the state to have braiding considered as it’s own rightful art form. She understood that braids and weaves are a form of identification, and that they presented a statement of who you are and what your stage or status in life is. What was most important to her was the telling of and sharing of stories while she was braiding. She created her own documentary called “Hair Stories” that was shown on WYBE-TV and also screened around the world. 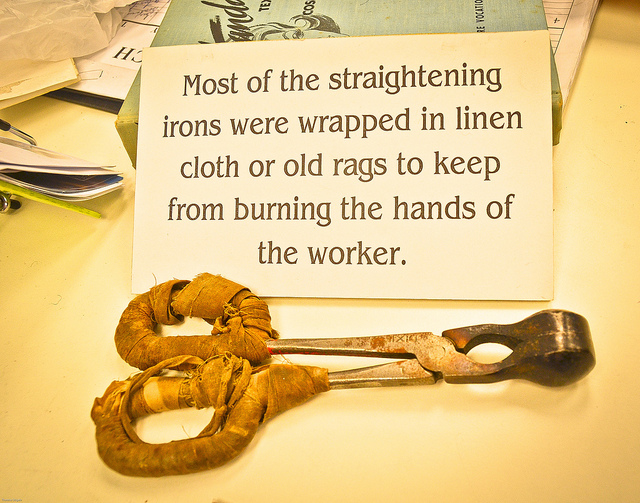 Hair straightening iron which was used after heating over an open flame | Photo: Theresa Stigale

TS: Why do you think that the beauty industry is still so important and thriving, even in today’s economy?
SR: Everything has relevance, that’s the exciting part of this industry–it’s so human to want to make ourselves look better, it comes from our ancestors. The museum was a way of bringing what we knew about the industry into a larger spectrum of understanding. There is more to the beauty industry that we realize; it is really the health and beauty industry. We heal ourselves in our mind and spirit by grooming. That is tantamount to looking good and feeling better about ourselves.

TS: You have a variety of tools in your museum; hair irons, mustache curlers, and razors. Were scissors always an important tool?
SR: Today’s scissors are our tools to cut and shape hair. We might take them for granted, but they are part of our history, a reference to the past. Ancient tools were typically broken pieces of flint, used by cavemen, and then later, any item with a sharp edge. They were used not only for hair but also to shape beards. I know stylists who have cut hair beautifully with a broken piece of glass.

TS: Tell us more about the history and science of the beauty industry.
SR: Madame C. J. Walker and Madame Sarah Spencer Washington were two very important African American women who had a great influence on the industry. They were self-made millionaires who understood the importance of hair care for African American women and strived to use natural ingredients. Madame C.J. Walker was born to former slaves in Louisiana in 1867. She invented a method to straighten hair and a formula to regenerate damaged hair and promote growth. Madame Washington was born in 1889 and founded Apex News & Hair Co. in 1919 in Atlantic City with an office in New York. She owned a laboratory, a publishing company, beauty schools and a farm in Egg Harbor, N.J. Her farm raised crops to use as botanicals in her hair products and to help feed her workers. She also opened a nursing home for workers in Atlantic City. She was awarded a medallion of honor at the 1939 New York World’s Fair as the “Most Distinguished Businesswoman.” When we look at the industry from a scientific point of view, we see that it takes us back to the earth, that we are all part of mankind. The ancient Chinese used grains of rice to whiten their skin and used lacquer on their hair. That was their idea of beauty. 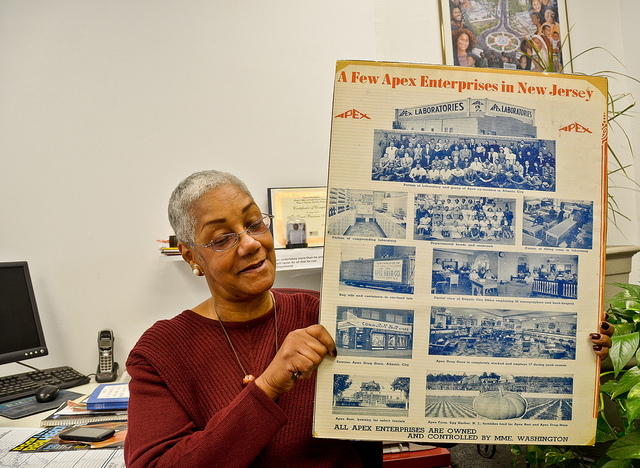 TS: What message would you like to pass on to future generations about the beauty industry?
SR: Look at how we have evolved—the reference is always there–we came from the earth and we are of the earth. We are all part of a vast circle of humanity. The industry helps us to see how we all strive to better ourselves and collectively, we can see how we are all really the same. Regardless of our outward appearance, we are more alike than different.