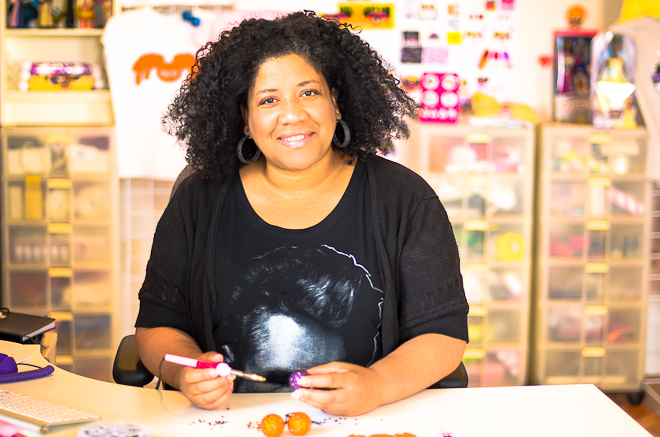 Editor’s Note: Addye Durant, the owner of Joyfantastic Design, lives and works in a loft on North 13th Street. Theresa Stigale talked with the artist, designer, and Prince fan about t-shirt design and her new brand Yay9! for kids.

Theresa Stigale: Addye, tell us about your lifestyle brand, Joyfantastic. It’s a remarkably inventive niche and a great name.
Addye Durant: Joyfantastic currently consists of Joyfantastic Tees for adults and Yay 9! for kids. It was a natural progression for me to start my own business, as my mother had her sewing studio and my father, Bernie Durant, had an engineering firm. I had already started my t-shirt line in high school, so after college, I was sort of expected to establish my own brand. 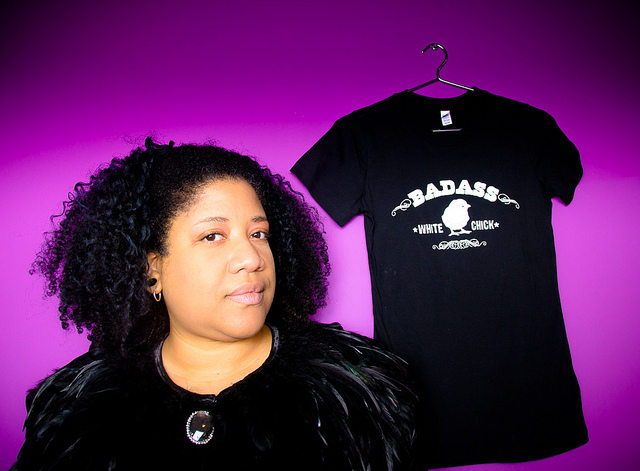 Addye Durant with her t-shirt design in her studio | Photo: Theresa Stigale

TS: How does your space inform your work?
AD: I really love this space! I moved in the building ten years ago. I was immediately attracted to the extra large windows and light. The open space really allows me to to think. It’s almost like I have no limits to my ideas because of the open-ness, the tall ceiling height and the light. It’s absolutely bright all day from morning to night. 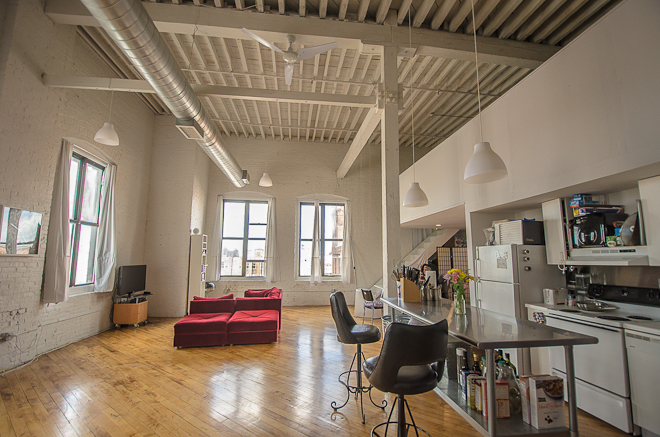 TS: Where did you grow up and where did you study art?
AD: I grew up in Allentown, PA and moved to Philly in 1988 to go to school at the Hussian School of Art. I studied Commercial Art/Graphic Design. It wasn’t until my senior year that we started using computers so I mostly learned graphic design by hand. When we first used the computers, the program was called Freehand and I still use it today. That was way before Illustrator, which everyone uses now. When I was younger, I also studied art at home under my mother’s influence.

TS: Who inspired you to become an artist?
AD: My mother, Joyce Durant. She was an artist and master tailor. She made the majority of my clothing (and my sister’s too) until she passed away in ’97. Our house was constantly filled with creative energy. My sister Crystal is also my inspiration. She’s is a really talented artist and DJ in NYC. She’s also sings every week in a place called the Loser’s Lounge in Joe’s Pub. 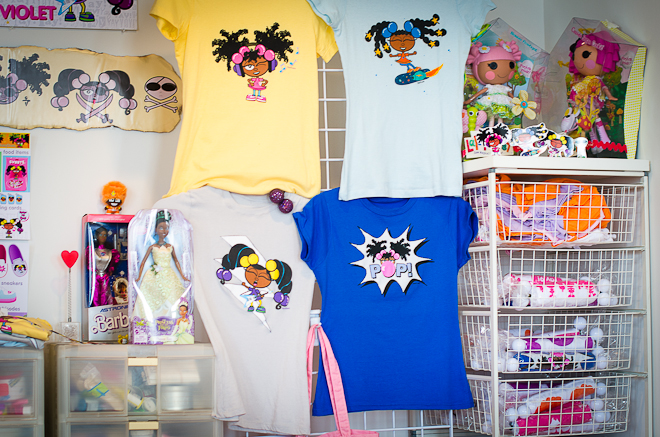 Yay 9! characters on display in the studio | Photo: Theresa Stigale

TS: Tell us about your Yay 9! brand characters: Lulu, Joyce and Violet & Sid. What did you have in mind when creating these characters?
AD: Joyce, LuLu, Violet, and Sid are super cute 9 year olds who have found their Yays….thus the name Yay 9! Yays are moments, people, places, and things that bring you joy, relief, or plain old just make your day – or make your Yay! I created them out of a need for a new kind of cute, while also reflecting facets of myself, my mother and sister. Our parents taught us to embrace our uniqueness, stick to our guns, and keep a positive attitude no matter what is thrown our way. That’s a large part of the Yay attitude.

TS: What’s your favorite color and art material?
AD: PURPLE! I love working with Swarovski crystals, acrylics (both plastics and paints), and all types of craft materials. 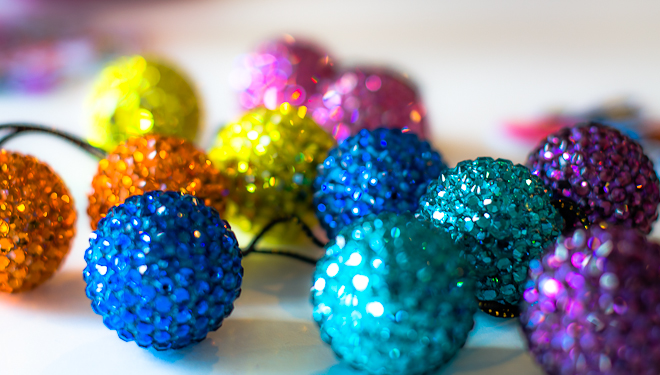 TS: I see a variety of branded products like tees, stickers, buttons, and hair accessories. What’s your bestseller?
AD: My tees are my best seller, by far. I also create other lines besides YAY 9, including the “Badass Black Chicks” tees (they also come in “White”, “Yellow” and “Brown”). I have a mantra for that line. It’s designed for that chick that sticks to her guns, defies stereotypes, lives with stye and purpose, is ahead of her time and always keeps you guessing; and for these qualities we thank her! She is loved for being her true self and embraces her uniqueness. 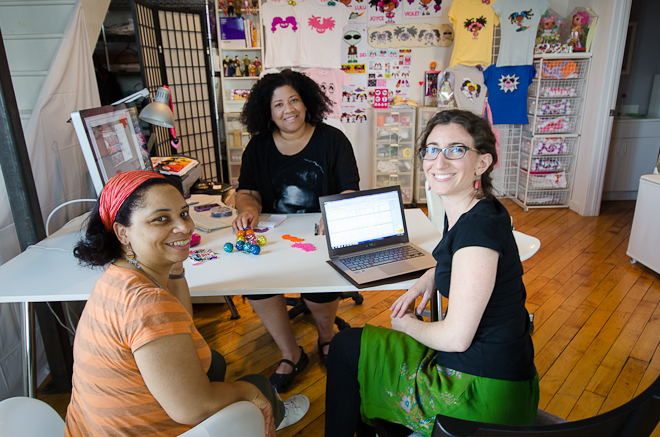 TS: How did you come up with the name Joyfantastic?
AD: It’s a word that the artist Prince created and used in his lyrics. It’s both a noun and adjective–plus my middle name is Joy and my Mom’s name was Joyce, so it seemed like a great name for my business. 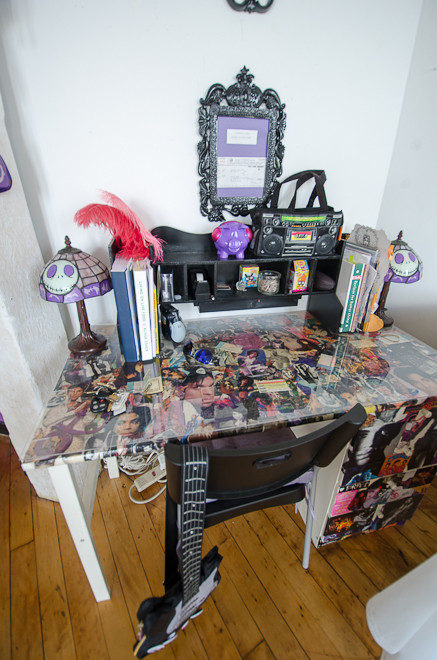 TS: Speaking of Prince, I love this desk that that you decoupaged with photos of him. What’s the deal with you and Prince?
AD: Prince is my creative inspiration. His music has kept me company throughout my whole life, from adolescence into adulthood. Not to mention that he is such an accomplished musician. I actually met him a couple of times. The first time I came in contact with him was when he pulled me up onstage at a concert in Minneapolis. I was at Paisley Park. So hey, Prince, if you’re ever in the neighborhood, stop by and check out your desk!