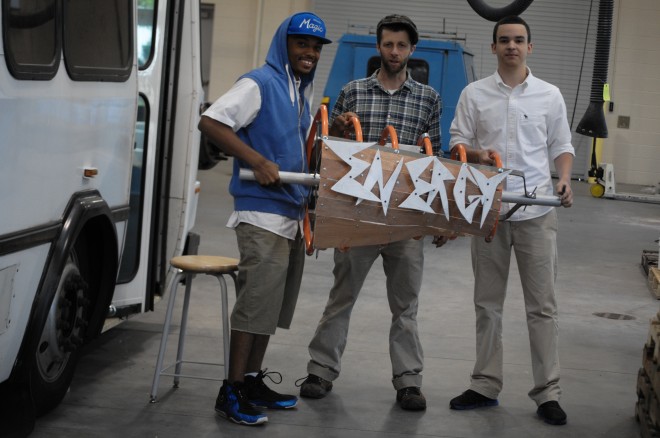 Jebney Lewis (center) with students who participated in the Super Creature of Energy and Power project | Photo: Maria Moeller

Editor’s Note: In collaboration with young people in three Philly neighborhoods, artist Jebney Lewis has created a Frankenstein-like 20-ft-tall sculpture called Super Creature of Energy and Power. The project was designed for the Commotion Festival, which is an initiative of the University of the Arts. It’s also a public art project funded by PECO and commissioned by the Philadelphia Redevelopment Authority’s Percent for Art Program and the Commonwealth of Pennsylvania. Beginning in January, Commotion held a series of diverse events and hands-on activities in the Grays Ferry, Point Breeze and South of South Street sections of Philadelphia with programs intended to “invite the community to interact and explore their neighborhoods in new and unexpected ways.” The project culminated in the 2-week festival that began on June 16 and runs through the 30, featuring the world premieres of six site-specific events as well as a variety of performances and artworks. Lee Tusman interviewed artist Jebney Lewis about the Super Creature, which debuts at Commotion’s sculpture-raising and block party event on Saturday June 30.

Lee Tusman:Where did the idea to build (or as you call it, “raise”) a Super Creature come from?

Jebney Lewis: Originally, we wanted to do something that would allow young people from different, potentially embattled parts of the neighborhood to work together on a project without having to cross borders of potential personal conflict. At first, we (the students from UArts-Trey Dulap, Aimee Goldsmith, and Olivia Diehl, and I) planned to work on each component of the project within different sectors of the neighborhood. We knew from the start that we wanted to work with youth, and I was looking for something that was a neutral theme to hang the project on. The sci-fi, superhero tack seemed like a good fit. I thought a lot about Power Rangers and Voltron, and also about totem poles and the heads from Easter Island.

A lot of my work is relational. I constantly draw stories from the places, materials, organizations, and people that are tied to the work to fold that information into what is being made. As the funding for the project was coming from PECO, I wanted to spearhead the creation of something that played with the somewhat abstract ideas of energy and power- that linked the utilities of the city to the creative energy and power of the residents of the community where the power station had been built. 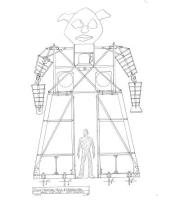 LT: We understand that the project funding comes from the one percent for art set aside when PECO built a substation on land in Gray’s Ferry purchased from the Redevelopment Authority.

JL: Yes, the mandate from the Philadelphia Redevelopment Authority and PECO was to make work in the neighborhoods surrounding the substation that involved residents and that was temporary. I believe both parties wanted to test this new model that put the emphasis on community engagement rather than permanence.

LT: Is that why you are creating a temporary sculpture instead of creating a permanent public sculpture?

JL: Actually, we would love the sculpture to be permanent! But I’ve found several interesting things about working on a project that’s temporary. People are more willing to take bigger risks aesthetically. If someone doesn’t like the final piece, it won’t be there for long! Also, the project then becomes more about the collective memory of making the piece and the event that surrounds it. The project gets absorbed into the mythos of the place. It becomes a story that people can tell each other. “Remember when they built that big thing right here, etc…” Unsuccessful public art can disappear in a different way. It can recede into the landscape until it practically becomes invisible. If we do our job right, we might alter the way people in the neighborhood perceive of the lot where we put the sculpture up, and may redefine the possibilities of that lot and others for future use.

LT: In this project you are collaborating with students. Why did you choose to collaborate with youth as opposed to working solo or with other professional artists?

JL: I seem to always want to work with young people. They have great ideas and are the best and most honest critics. I very infrequently work alone on projects. I’m more interested in seeing what emerges from a process of collaboration, especially when it includes folks who bring a wide variety of backgrounds and interests to the work. As it turns out, a lot of professional artists did volunteer their time and talents to this project. There’s too many of them to mention here. But the people in my creative community seemed compelled to contribute to a community-based project that was large, inspiring, and also somewhat playful and silly!

LT: What do you hope the students will gain from working on this project?

JL: I want students to understand that they can problem-solve to create new forms and objects from materials that they may have disregarded or not considered. I also hope students feel that they have permission to use their ingenuity and the tools available to them to alter actual things in the physical world. Learning had become so virtual and abstract for a lot of young people. We have spent a lot of time on this project teaching kids how to bang things together and use power tools. I cannot say enough about how transformative it is for people to feel that they can manipulate and improve the underpinnings of their environment. DIY is for everyone. Young people especially seem to get a real charge out of building new, unexpected things with their minds and hands. Maybe this kind of engagement can be the jumping off point for some students to further develop critical thinking and making skills to tackle some of the larger problems we face as a society. On this front, we can use all the help we can get!

LT: In the Mural Arts model, the lead artist engages with a community to develop a final mural plan. In your project, what kinds of groups did you interact with to decide how the work would be created? Did you make changes based off of feedback you received?

JL: We did come to the community with a fairly fully formed idea in mind- the creation of this large-scale creature sculpture. But the sculpture itself constantly changed based on the input from the students, the availability of materials, and the creative input from Trey Dunlap, Olivia, Diehl, and Amy Goldsmith. In two of the workshops- the one at Smith Elementary and the one at Audenreid high school, the students themselves essentially collaborated to design and build their elements of the creature. As most of the work we did was in schools and community centers, we usually had to arrive with a skill building curriculum in place that was fully formed and as effective as possible.
The block party event (which is just as important to me as the sculpture) has been an outgrowth of our involvement with so many people down in Point Breeze and Gray’s Ferry doing great work, social, artistic, and otherwise. Ade Fuqua from Philly Rising and the Managing Director’s Office of the City of Philadelphia, the folks at Diversified Community Services, the Christian Street YMCA, Dominic McFadden and the recording studio at Wilson Park Community Center, the neighbors on Fernon St. at Point Breeze Ave.- everyone is bringing their own thing and rolling it into the final event.

LT: What have you learned during the process that might change how you would plan a similar project in the future?

JL: If we were to do this project over, I would love to have much more time to work with different sectors of the neighborhood to incorporate more elements and stories from the community into the final artwork. This kind of work takes time. Time to make contacts, build trust, form relationships. Tremendous amounts of time. The kind of time that doesn’t fit neatly into the budgets, plans, or schedules of the institutions that fund these kinds of projects. Time is a thing I know we all wish we had more of, especially when attempting to make meaningful, respectful, community-engaged work. I think we did a pretty good job, but we could do better with more time.