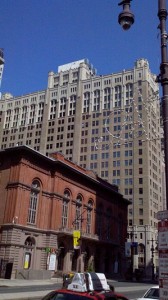 Editor’s Note: This article provoked the archivists at the Athenaeum to do some research into the attribution of the Equitable Trust Building to Horace Trumbauer. For the results of their research, which shows that Trumbauer was only the “consulting architect” to A.F. Gilbert of New York, click HERE.

Horace Trumbauer’s Equitable Trust Building still inspires. Despite some setbacks over the years, this old girl is still kicking ass and taking names all over South Broad Street. It survives as a shining example of how an 80 year old office building can continue to successfully live out its original purpose.

Equitable Trust Company of New York’s head honcho, Louis Cahan, was to Trumbauer like the Medicis were to Michelangelo or Tim Burton is to Johnny Depp. Cahan loved Trummy’s French-inspired designs. The St. James Hotel, the Philadelphia Building, and the Chateau Crillon Apartment House were all Cahan-Trumbauer productions. To outdo them all, Cahan commissioned a design from Trumbauer for the Philadelphia headquarters building of his own massive company. This one would have to make the others look like trash.

Trumbauer came back with a killer. A Gothic office-castle with a huge, well-appointed theater on the ground floor. A landmark building with fortress towers on the roof. A stone-covered foot and crown so impressive they’re capable of inspiring a spontaneous Renaissance Faire. 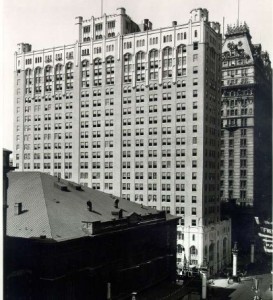 The Equitable Trust Building was completed in 1922. Just to make sure everyone knew who was occupying the place, the company put a letter “E” in every window. In 1927, the Fox Film Corporation (well before the Rupert Murdoch era) was looking to expand into a second Philadelphia location. The Fox-Locust Theatre became the first to permanently occupy the Equitable’s 1,580 seat Gothic theater.

Equitable Trust became part of Chase National Bank in 1930 and still sort of exists today as JP Morgan Chase. The Philadelphia remainders of the company moved over to the Fidelity-Philadelphia Trust Building (now Wells Fargo Building) nearby, opening the old Equitable Trust space up to a myriad of office tenants. The theater then became the main focus–the building became colloquially known as the Fox-Locust Theater, even though they had just moved out due to low attendance and company problems. 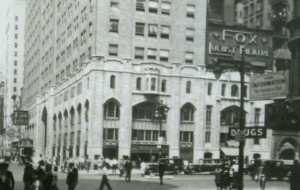 The theater would re-open in October of 1931 as the Locust Theatre, run by the Boyd’s Alexander Boyd. The theater proved successful, and was renovated in 1933, 1937, and 1938 to accommodate new projector and screen technology. Through the decades, the office tenants would continually turn over while the Locust Theatre would keep going, showing both movies and live performances. New owners in 1958 would renovate the space with pieces from the recently demolished Mastbaum Theater, reopening the place as the “New Locust Theatre.”

By the 1970s, the office space of the building was empty, antiquated, and falling apart. The facade was super-dirty and the theater was in terrible shape. South Broad Street was in an awful slump, an unintended consequence of the building of Penn Center in the 1960s–Philadelphia couldn’t support two office centers. The theater was last used for a theatrical production of the “Rocky Horror Picture Show” in 1980 and was controversially demolished in 1982, supposedly far beyond repair, to make way for a parking garage. 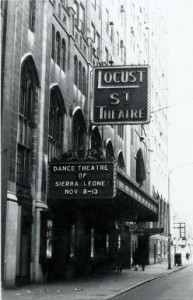 The marquee and dirty facade in 1975. | Photo: Philadelphia Architects and Buildings Project.

In the 1980s, the ambitious savior of South Broad Street, Ron Rubin, of Robert I Rubin Company, completely renovated the old Equitable Trust Building, backed by a real estate company coincidentally named Equitable. The elevators were replaced, a sprinkler system installed, and the office spaces modernized. The remains of the ground floor were converted to a retail bank and a restaurant space that would be seen in the film “Mannequin.”

The building would again become fully occupied by both office and retails tenants, but it wouldn’t last. The place went bankrupt in 1993 and after some more renovations (that would ruin the crown of the building with HVAC units), in 1999, would be sold for $12 million to its current owner, Amerimar Enterprises.

Presently, Horace Trumbauer’s masterpiece is going stronger than ever. It now goes by 230 South Broad Street, named for its address. It’s nearly 100 percent occupied–tenants include the Rand Spear daytime TV injury law firm and the displaced Philadelphia International Records. The old theater marquee still endures, held up by the teeth of facade faces, over the outdoor seating of Estia. The Equitable Trust Building is just as useful and important as the day it opened. If Cahan were alive today, he’d be pleased with his vassal’s work. Here’s to another eight decades!