From A Corner of Center City, The Source Of Light 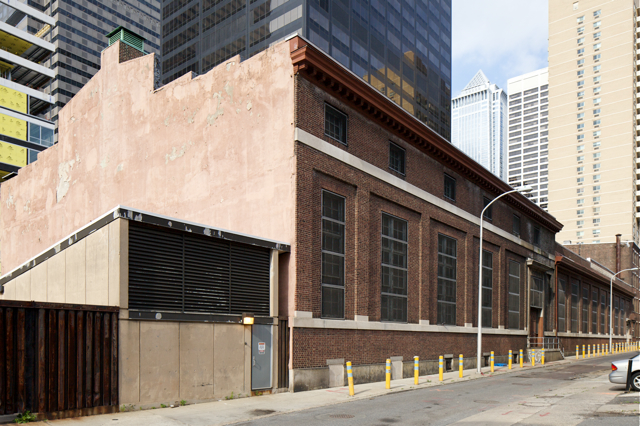 The building isn’t much to look at. Tucked away at 20th and Ranstead Street, it’s a typical 19th century industrial hulk with a few nods to classical ornament. A graffitied sign reads “Ludlow Substation;” a faint hum can be heard from within. But this plain brick shell bore witness to the birth of the electrified world. This was the Brush Generating Station, the first power plant in Philadelphia. It was built to power the first electric streetlights in the city–and among the first in the nation. 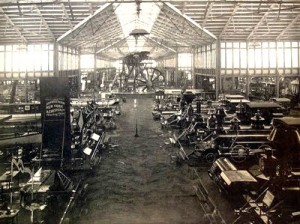 Like so many stories of the Workshop of the World, this one begins at the Centennial Exhibition world’s fair of 1876. Among the many mechanical marvels displayed was a small exhibit with a generator and three electric lights by the inventors Moses G. Farmer and William Wallace. It caught the attention of John Wanamaker, who understood the marketing potential of a store illuminated by electric light. The problem was that the Wallace-Farmer equipment, still a toy for scientists, was both expensive and unreliable.

The same year, a brilliant Ohioan named Charles F. Brush invented the first practical generator. Brush was obsessed with electricity from his earliest childhood, and built a primitive static generator at the age of twelve. A mining engineer by trade, he tinkered with electricity in his basement laboratory after work. Above all, he believed that electricity, particularly electric light, was poised to transform the world.

In 1877 he built an arc lamp, a primitive electric light. In the age before the light bulb, electric light was made by making a current jump between two sticks of carbon called “pencils.” This jump, or “arc,” produced a harsh white glare that was vastly brighter than the gas lamps then in use. The “Brush Patent” was not the first arc lamp, but it cost a quarter as much as its rivals and lasted twice as long. With these two inventions, electric light became commercially viable for the first time.

The Franklin Institute would soon make Brush a star inventor. The Institute had just installed a six-horsepower steam engine to test machinery. Electricity was a hot research topic, so they started shopping around for a generator to hook up to their steam engine. In the winter of 1877-78, they tested Brush’s dynamo and the designs of two rivals. The Brush generator proved superior and Brush’s reputation as an inventor was sealed. John Wanamaker purchased 28 Brush lamps and six Brush generators for his department store. 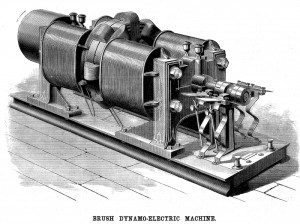 When Wanamaker threw the switch on Christmas Day 1878, Philadelphians were dazzled by the blaze of light. The lamps together gave off as much light as 72,000 candles, or four thousand gas lamps. One visitor described the lamps as “miniature moons on carbon points, held captive in glass globes.” The Public Ledger remarked that “silks and ribbons of colors which are difficult to be seen in the gas light could be readily distinguished under the electric light.” Customers flocked to the brightly-lit goods, and evening business increased. What’s more, electric light was cheap. The whole store could be lit by electricity for five dollars an hour, while gas lighting cost about $40 per hour. From then on, electric light would become a permanent fixture of the store. The display would also inspire Thomas Edison to go into the business of electric light. 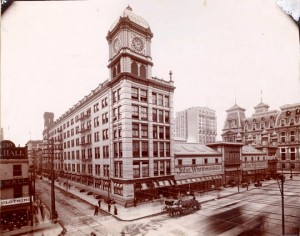 The light indeed spread fast. Other business owners began installing Brush lamps in their stores and factories. Towns and cities ordered Brush lamps to use as streetlights. With successful Brush streetlight systems in New York and Cleveland, a handful of Philadelphia magnates decided to illuminate their own city in 1880. Among them were John Wanamaker, textile baron Thomas Dolan, and the banker John Lowber Welsh, who managed the finances of the Reading Railroad. After buying the right to manufacture Brush equipment, in March, 1881, they founded the Brush Electric Light Company of Philadelphia. Their first project was to light Chestnut Street from river to river, “bright enough for a man to read a newspaper.” 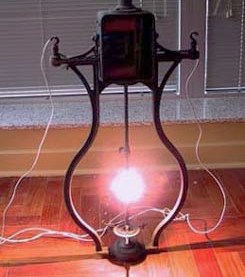 To power the new lights, the company built Philadelphia’s first power station on Ranstead Street. The building originally contained eight dynamos and eight steam engines to power them. It was designed and built in less than six months for a total cost of $90,000, about $2 million in today’s currency. The company installed 49 arc lamps, one at each intersection of Chestnut Street. Each lamp was mounted on a red-painted iron pole forty feet high. On December third 1881, at one thirty in the morning, the streetlamps were switched on for the first time. On a technical level it was an impressive feat, but, according to the The Public Ledger, “the great blaze of light which seemed to be expected by many was wanting.” 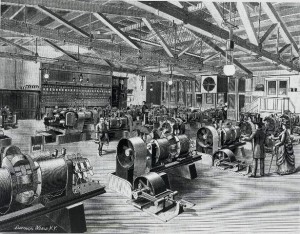 The Brush Generating Station, as it first appeared

This was probably because the lamps were spaced so far apart, as each block is four to five hundred feet long. The gas lamps would continue to burn on Chestnut Street for some time. Where the two kinds of lamps overlapped, however, there was no contest. By comparison, the gas lights looked “yellow, dim and sickly.” It was evident which technology would own the future.

Soon enough, new pole lines snaked down Market and Sansom Streets. In 1884, the Ranstead station was expanded by adding another boiler house and raising the roof on the original building. With power lines now running past their front doors, Philadelphians began to run wires into their homes and replace their gas lamps with electric ones. Electricity gradually became a commodity for the masses. 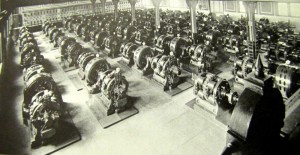 Competition for the new market was immediate and fierce.  Between 1881 and 1895, more than twenty rival electric companies were formed in Philadelphia. Each had its own grid and power plants, like the Edison plant at 908 Sansom Street. By 1902 they had all been consolidated into the Philadelphia Electric Company, now PECO Energy. By that time, there were over 400,000 arc lamps in service all over the US.

The original Brush Generating Station is still owned by PECO, though it no longer makes electricity. Today it is a substation, converting high voltage electricity into a lower voltage that can circulate through the city grid. If you live or work in Center City, it’s likely that your power has passed through this building on its way to your coffee maker. So raise your mug to Charles F. Brush.