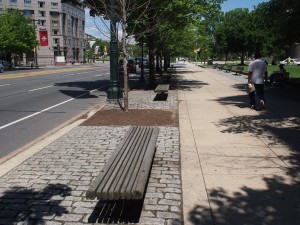 Outdated and deteriorating, near 17th and the Parkway | Photo: Nathaniel Popkin

The final phase of streetscape improvements for the Ben Franklin Parkway will commence in Spring, 2013, according to Fairmount Park officials. The project, designed by the architecture firm Cope Linder Architects in conjunction with the park’s design staff, will include improvements to landscaping, street trees, street furniture, bike lanes, and curbs from 16th and Arch Streets to the south side of Logan Square. The project will be complete in 2014, in advance of the Parkway’s centennial in 2017.

This phase, funded by PennDOT, brings almost a decade of continuous rebuilding of the Parkway’s civic spaces–meant to enhance the experience of the pedestrian and cyclist–to a close. “It took determination and consistency of focus to make it happen,” says Mark Focht, Fairmount Park executive director.

The only signature Parkway space to remain essentially unchanged will be Eakins Oval; Focht says despite a half dozen plans, given the complicated nature of the space a path forward has been elusive.