So what are the true costs of union building? For comparison, the Hidden City Daily examined a similarly sized–though new construction and not renovation–development a few blocks south of the Goldtex site that is being built using all union labor, the Hilton Home2Suites. Located at 12th and Arch, this $60 million construction project also differs from the Goldtex project because it was financed in part by $12.8 million in state-funded incentives (of which $4.8 will be repaid). Situated across from the newly expanded Convention Center, a hotel seems like the kind of money-making endeavor that would be the last sort of project to require government subsidy. Are the extra $8 million going to cover the costs of using union labor? 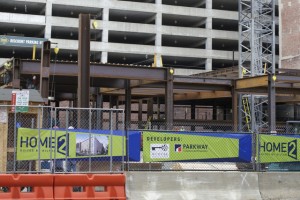 State Representative Dwight Evans, who was instrumental in steering state dollars to the Home2Suites development, said that that the grants were mainly doled out because “financing was difficult and depended on cooperation from the local government.” He emphasized that the tight lending market made any development difficult, even profit-earning hotels in Center City, and that the Convention Center had created an urgent need for hotel space. But when asked if the money was also going to cover the above market cost of union labor, he acknowledged that it was “a factor, although not the only factor.”

“The building is going to be a union project. They’ve got union pension funds invested in it so obviously they should work there,” said Evans, adding that the state financing had helped create hundreds of temporary and permanent jobs.

The hotel’s developer, Robert Zuritsky, president of Parkway Corporation, agreed that there were multiple factors involved in his project receiving state money. “It’s really a combination of lack of activity along with labor costs,” he said, citing Philadelphia’s flagging job base as putting a drag on hotel rates. “You build the same project in Manhattan and you’re getting 100 bucks, on average, on top of your ADR (Average Daily Rate).” But Zuritsky acknowledged that union labor made up the other half of the equation. “Union costs increase your overall costs by 40 percent, as a sort of rule of thumb,” he explained.

Interestingly, Zuritsky’s company had actually been given the opportunity to buy the Goldtex building from its previous owner. “We looked at that building, because it was offered to us, and even if they gave us building for free we couldn’t make it work because we were gonna build it union,” he said.

Zuritsky also made comments that indicated that other developers were closely watching the battle for the Goldtex building–and what precedent would be set by its outcome. “You know what those guys (the Pestronks) are doing is really interesting. They’re doing everything they can, they’re working on the weekends, they’re really doing it quickly…I hope the best for them, I hope they make it,” said Zuritsky. Then he added, “You know you can build non-union in Manhattan now?”

“Philadelphia has the fourth highest construction costs in the nation, about 20 percent higher than the national average. There’s nothing wrong with that, per se, if you have high house prices, high rents and incomes to cover that,” said Gillen. But Philadelphia’s rents and incomes are more in line with places like St. Louis and Cleveland. “I like to say we have Manhattan building costs with Baltimore rents,” he added.

Gillen says that part of these costs are related to Philadelphia’s taxes and governmental inefficiency, but that labor premiums for city unions alone pushed construction projects to the suburbs. “The difference between building in the city and the suburbs is a 20 percent premium on union labor costs. You cross City Line Avenue and your costs go down 20 percent,” he said.

More damaging, Gillen said, was the inflexibility of union labor costs, particularly during recessions. Gillen says in Philadelphia, union labor costs actually went up during the height of the real estate crash as all the trades, except the Carpenters, pushed for raises in their contracts.

“It’s not just that wages increase, it’s that they increase in variance to any movement in the business climate or the economy. During a recession labor prices typically come down, but these guys, whether the economy is booming whether it sucks or it’s just flat, their wages only move up,” he said. Gillen says the overall result is that only luxury developments with the highest rates of return become economically feasible, exacerbating gentrification fears as unsubsidized low and middle-income developments become impossible to build.

“Developers can’t just eat those costs, they get passed on in the form of higher rents they have to charge people. And if you’re not willing to pay, than stuff doesn’t gets built. The only place you see construction is in the high end of the market. Even during the building boom all the construction projects were condos and townhouses around Center City. To get a low or middle income development built you almost always need to have some sort of government subsidy,” he said. Eventually, as in the case of Home2Suites, even profitable, high-end development starts seeking government subsidy, and the whole system becomes unsustainable without constant infusions of government cash.

Gillen credited the unions for their impeccable safety record and efficiency. “It’s worth paying someone a wage premium if they’re more skilled and productive,” he said, but added that eventually high wages, generous benefit packages, and expensive work rules reached a point where they created incentives for developers to stop hiring union labor. Hence the Goldtex conflict. 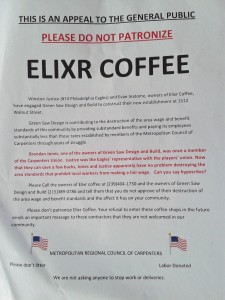 “There’s a reason none of them are working right now. That’s why they’re protesting: they’re not working. During the boom years you could get away with small non-union projects in the city because as long as the trades are working and making money, they’re happy. But not now.”

Post Brothers insists it is caught in the same trap. “We’re not on any crusade, we’ve always used union contractors and mixed crews. More than half the guys on the site were going to be union guys. All we wanna do is build our projects,” said Mike Pestronk.

“They took this position that it has to be all or nothing, and that ended up harming their own men,” he said, adding that there negotiations with unions were ongoing.

Gillespie maintains Post Brothers is just trying to undermine the unions that built the region’s middle class to line their own pockets, saying labor savings would never be passed on to the consumer.

“The wages they pay are something like 30 percent less than what our members make, so I wonder if there is going to be a 30 percent discount on these units,” said Gillespie. “All these areas are exploding right now and all these developers are driving Mercedes-Benz and they’re renting their projects and they’re doing more and more work. But somehow or another for the Pestronk brothers it’s too expensive to pay a person a fair negotiated wage,” he added.

As good as tough talk sounds, the facedown reveals that intractability serves no one. Developer’s capital and visions are needed to fuel the revitalization of the city as much as the union’s skills and wages are needed to realize those projects and help create a class of people that can actually afford to live there. Selling out to developers is no solution, but neither is war. Reasonable wage negotiation on the part of the union, that truly takes into account what the real estate market in Philadelphia can support, would serve everyone involved because it would lift the lid on what’s able to be built here.

Crusade or not, Post Brothers has fired a shot across the bow of previously unchecked union hegemony and people have taken notice. Without real compromise now, it is certain that they will not be the last to do so.