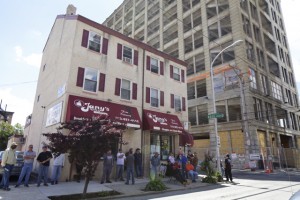 Union pickets next to the Goldtex Building | Photo: Peter Woodall

Last Thursday when we visited Goldtex, tradesmen leaned against scaffolding on a neighboring construction site chatting casually with police and Sheriff’s deputies who had been brought in to enforce the restraining order. The order has also dispersed what was an initially clustered group of union protestors into several small camps scattered around the building perimeter, divided up, voluntarily it seemed, by trade.

Now the protestors will periodically rush delivery trucks in an attempt to rout shipments of important equipment and slow construction progress, but mostly they sit. And wait. And wait some more.” I was told by union protestors that they typically received about $5 a day and some food for camping on “scab” construction sites.

A group of four elevator workers had brought folding chairs and sat in the shade of an SUV’s opened hatchback, reading, staring vacantly, or sipping on water from a nearby cooler. Between the blazing sun and khaki sidewalk, the scene felt almost beach-like, the ocean replaced with a chain link fence, manned by several equally bored security guards.

Opinions from the rank and file on what they were doing were delivered with varying degrees of enthusiasm and specificity.

“We’re here to fight for fair wages,” said one protester in a group of several elevator workers, who said he wasn’t very familiar with the developers or this particular site, as he had only recently arrived. Union members and entire trades will rotate protest duties to combat fatigue and general ennui for what is viewed as a necessary but undesirable job.

From another protestor nearby: “We’re here to make a point: this is a union town.”

“They got out-of-towners here taking our work,” he continued, although all but one in the small group later acknowledged they lived outside the city limits.

The building itself? “It’s being built by scabs and it’s gonna be a shitty place to live.”

Although all refused to give their names (and sometimes even their trade) or be photographed, many volunteered stories, some more cryptic than others, of the Post Brothers alleged misdeeds.

“They brought in Latin Kings to intimidate us, there were 30 of those gorillas standing at the front gate a few weeks ago,” said one gray-haired protestor.

“These security guards are all straight out of Afghanistan and Iraq, ex-military,” said a sheet metal worker.

“All I know is they got German bankers financing it, $58 million dollars of German money,” said a younger elevator union member, who added that he heard the Post Brothers laborers were making $9 dollars an hour.

The Post Brothers denied these allegations. However, a middle-aged sheet metal worker had a potentially more cogent critique of the Post Brothers non-union safety standards. “You look at this construction site, all these openings are wide open,” he said, pointing to the building’s empty floor to ceiling window frames. “You go to any one of our jobs with an opening like that has a railing or a toe board. You take those off and every worker needs a harness on. These motherfuckers that hire them they don’t give a fuck,” he said. 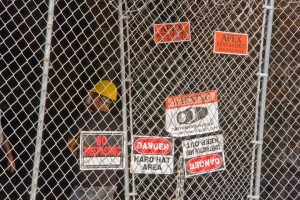 A worker behind th securitized gates around the Goldtex site | Photo: Rob Lybeck

He assailed the treatment of non-union workers as well. “What they’re making is not enough for them to pay their bills, have a car, pay insurance. You see them come in with shorts on, they got sneakers, no boots whatsoever, no long pants, no long shirts. All you got to do is come here in the morning and look at these guys they’re calling ‘skilled laborers’ and you can look at them and tell they’re not making the wage that they should be making for that kind of work. They can’t even buy the right equipment to take care of themselves and make sure they can work another day,” he said.

The Post Brothers say they have met OSHA safety regulations and claim they pay wages between $25 and $45 an hour.

Asked about the cost of union labor, the union protester added, “I’ve taken classes on estimation. If you go through the numbers, you’re not going to have the same profit, but you’re still going to have profit.”